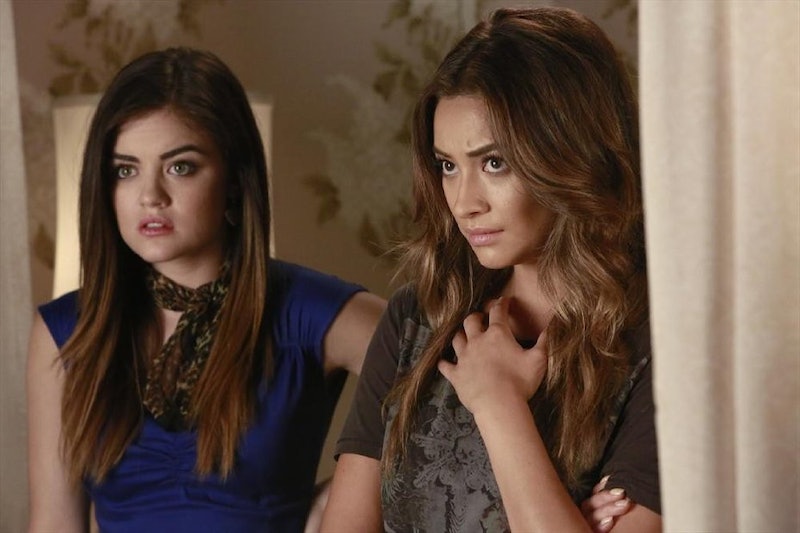 Hold on to your hats, guys: the Pretty Little Liars summer finale is almost here. I gotta say, I'm quite sad about the whole thing — how am I supposed to make it to Christmas (Christmas!) until new episodes grace the screen?

Hiatuses are always tough, and it only gets worse: You see, PLL's upcoming hiatus may be even more difficult to weather than your average bear, because tonight will supposedly feature the death of a major character. So now, in addition to a looong hiatus (and the ensuing cliffhanger that's sure to come along), we also have a fictional bereavement to mourn on top of it all.

Speculation is a-runnin' wild as to which character we'll lose tonight: The events of the prematurely canceled Ravenswood would seem to make Caleb a top candidate, but there's also the fact that Mona's mother will be making her first-ever appearance on the show — which certainly doesn't bode well for Mona. Other likely choices include Cadet Toby, Melissa Hastings, and Ali (finger crossed on that one).

Well, since we'll have all the way from here to Christmas to cry (or celebrate, as the case may be), let's take this time to talk about the show's clothes! This season's fashion game has been as A+ as ever, and as such, I've curated a list of the 15 best looks — let's countdown:

My love for #HannasNewLook quickly soured, but this denim jacket/turtlenecked mini combo is ah-dorable. Also, her highlights look amazing here.

Another turtleneck! I mostly included this because I love hats of all shapes and forms.

This look is complete crazy pants, but I love the Agent Peggy Carter-ness of it all, and you've got to admire her chutzpah.

12. Aria in "Surfing the Aftershocks"

No one does cutesy dresses in unexpected prints better than Ms. Montgomery here.

11. Spencer in "Thrown from the Ride"

I'll never get over Spencer's love of animal-printed items of clothing.

It marked her return to shoplifting, but this crushed velvet bustier/miniskirt combo was very cute in a return-to-'90s-grunge kind of way.

9. All Four Girls in "Surfing the Aftershocks"

Their funeral fashion game is on point — I guess they've had a lot of practice. That said, I don't know in what world it's okay to wear a bejeweled romper to a funeral.

8. Mona in "No One Here Can Love Me or Understand Me"

Anthropomorphized food is my heroin.

Emily's love of bomber jackets was well-documented this season, and this is my favorite of the bunch.

6. Aria in "No One Here Can Love Me or Understand Me"

This cobalt blue dress is super cute, and her accessorizing brings it to the next level: I'm kind of in love with her neckerchief, and her pumps paired with lace-trimmed bobby socks are just plain adorable.

5. Hanna in "Surfing the Aftershocks"

4. Paige in "No One Here Can Love Me or Understand Me"

Tough luck, Em. Of course you ran into your ex when you were wearing your rattiest work clothes, and she was dressed in this super-fab off-the-shoulder number with an anonymous (and equally well-dressed/coiffed) blonde on her arm.

I can't get enough of this spiky sweater/plaid leggings combo. And it's actually one of the outfits part of costume designer Mandi Line's collaboration with Aeropostale, so if you really like it, you can own it!

Mona completely killed me with this Lisa-Frank-come-to-life ensemble,

It was a simple outfit (especially for PLL), but I'm still not over this polka dotted neckerchief and three-quarter-length sleeved black top.