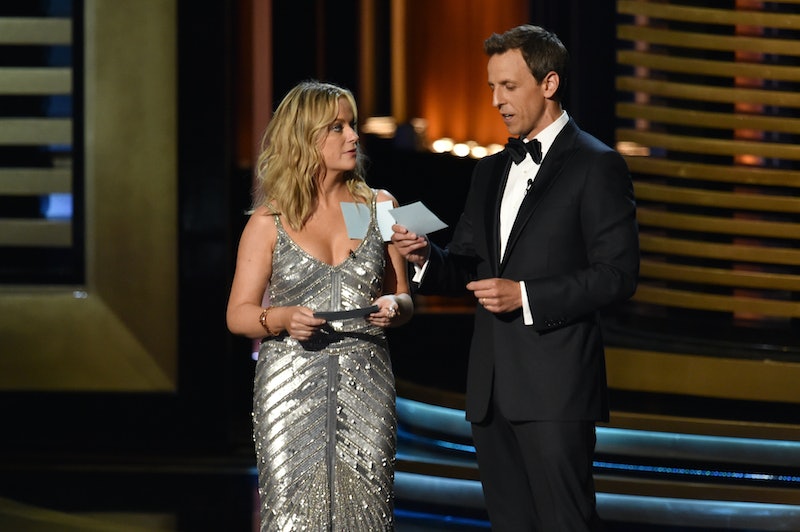 One theme that permeated last night's Emmy Awards — particularly host Seth Meyers' opening monologue — was the mild tension between the old guard of network television and the middle-aged guard of cable television. There was also the toddler precociousness of Netflix, but the ratings battle between cable and network was where the real action was — especially when it came to the inevitable comparisons to the other awards show that had aired just the day before. So which rated higher: The MTV's Video Music Awards or NBC's Emmy Awards?

The ratings difference between those two, it turns out, is not as large as one might think — though network TV's still winning on this front. It was reported Tuesday afternoon that this year's Emmys brought in 15.6 million viewers, down from last year's Neil Patrick Harris-hosted 17.8 million but still the second-best ratings the broadcast has had in eight years. Considering this year also had the show shifting to a Monday night — a bit inconvenient for us on the West Coast, where the broadcast started at 5 p.m. — it's huge.

So how'd the VMAs do? Like the Emmys, they were down about 2 million from last year — their 2013 ratings were 10.1 million — putting this year's first playing of the awards at 8.3 million. When calculating the entire ratings, Deadline also factored in the simulcasts on MTV, MTV2, Logo, and VH1, as well as the night's reruns of the show, which brought the total to 13.7 million.

Those are a lot of caveats and the naked number's still pretty far down from the Emmys, but considering the VMAs' cable location and presumably youthful audience, it's not that huge of a gulf. It certainly doesn't make network television look as elderly as Meyers did, remarking during the show:

And no one is happier to see streaming services take nominations away from cable than network television. Not very nice when someone younger comes along is it, cable? Cable is looking at Netflix the way Justin Bieber looks at One Direction. Through a cloud of marijuana smoke.

More like this
How Lady Gaga & Adele Are Closer To The EGOT All Of A Sudden
By Jake Viswanath
17 Years Ago, 'Hannah Montana' Reportedly Almost Cast This 'Gossip Girl' Star
By Grace Wehniainen
Netflix Reveals First Look At Wednesday In The 'Addams Family' Spinoff Series
By Bustle Editors
The Office Lego Set Includes All Your Favourite Dunder Mifflin Characters
By Sam Ramsden
Get Even More From Bustle — Sign Up For The Newsletter