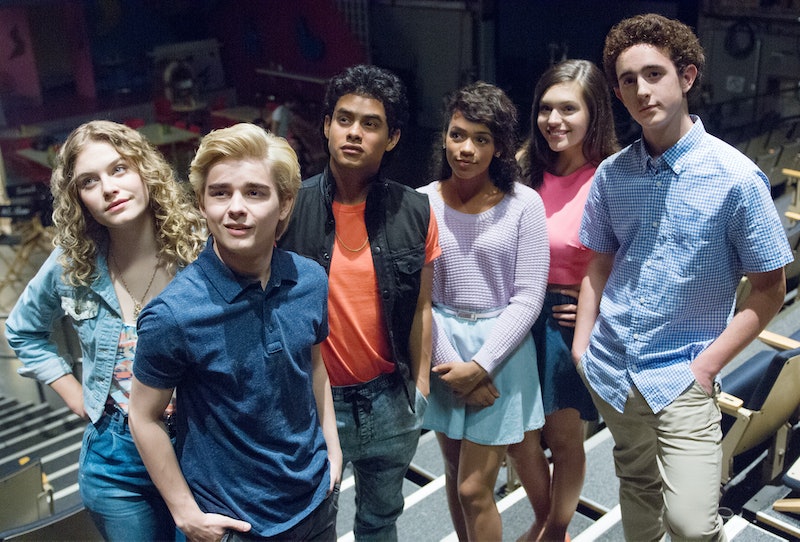 Oh, the geniuses behind Lifetime. This Labor Day, they are targeting a whole generation of adults who grew up watching Zack Morris, Screech, and the rest of the Bayside gang in The Unauthorized Saved by the Bell Story . But controversy surrounds the film since it is "unauthorized." Most of the original cast had nothing to do with the film, while Dustin Diamond — who played Screech — is an executive producer. So, how true is this movie going to be?

Mr. Belding (Dennis Haskins) doesn't approve of the Lifetime movie, as he showed in an interview with TMZ. His resistance stems from the movie being loosely based on Diamond's tell-all 2009 book about the show, Behind the Bell. Diamond has been doing damage control since his controversial sex tape, his stint on VH1's Celebrity Fit Club, and Behind the Bell, particularly in an interview with OWN.

As shown in the interview (clip below), Diamond claims the book was written by a ghostwriter and that some of the scandalous moments about drugs and sex in the book were based on throwaway comments he made: "That turned into factual trash talking about everybody. . . . I have nothing but good thoughts and memories towards everybody." He claims the book was a disappointment and that he never had the chance to proofread it.

If that's how Diamond feels, it does beg the question: Why would he be an executive producer on this Lifetime movie? He apparently hasn't even seen the movie and told TIME magazine, "I’m going to watch with very nervous hopes. . . . If they butcher it and get it completely wrong, I’m just going to film a documentary of just me talking about the errors.”

Interestingly enough, early footage of the Lifetime movie makes it seem like we'll feel pretty bad for old Screech. I remember watching the E! True Hollywood Story about Saved by the Bell years ago, and even then Screech was portrayed as a loner — particularly due to the fact that he was younger than the rest of the cast. Diamond called himself the "odd man out."

Elizabeth Berkley and Mario Lopez recently reunited on Extra and discussed the film. The pair were Saved by the Bell's other couple in the form of brainy Jessie Spano and athletic A.C. Slater and neither of them wants to watch the Lifetime movie.

Meanwhile, Lark Voorhies — who was Lisa Turtle — is busy rocking a very questionable hair style. (What would fashionable Lisa say?!) And Tiffani Thiessen — who portrayed Kelly Kapowski — hasn't spoken out about the film.

But what about the SBTB ringleader Mr. Zack Morris himself? Mark-Paul Gosselaar and Breckin Meyer were doing an interview with HuffPost Live about their show Franklin & Bash. The topic of Dustin Diamond came up and Meyer could not hold back on what he thought.

My favorite quotes of the interview from Meyer are toward the end about Diamond's sex tape (referring to Diamond's little Screech): "Screech is not packing that. Get the hell out of here. He doesn't have six Beldings beneath him. There's no fucking way. You're full of shit, Dustin. Suck it."

Gosselaar stayed calm about the whole situation and just said it was Diamond's perspective and only commented that he didn't like how everything was being portrayed as negative. Diamond himself responded to Meyer's bashing to Rolling Stone and it shockingly was pretty levelheaded (except for the fact that he thinks he's more well-known than Meyer . . . which I guess is debatable, but Meyer has definitely been in more respectable projects over the years).

In that same Rolling Stone interview, Diamond discussed being an executive producer of the movie and said: "No, it’s definitely going to be in a positive light. It’s not out to trash anybody or put anybody down or make anybody look in a negative way. That was never the intent, so it’s definitely not the way it’s going to end up."

I'm hoping that Gosselaar, Berkley, and Lopez aren't still partaking in the alleged bullying of Diamond that The Unauthorized Saved by the Bell Story portrays. I'm of the mindset that things might not have always been great for Diamond on set, which does make me really sad. But then in the early 2000s, he wanted to get back in the spotlight and made outrageous statements about the show and now, he's backpedaling. Not to take away from any pain Diamond had on the show, but how bad could the set have been with scenes like this?

So what's a SBTB fan to do? Part of me wants to support the majority of the Bayside clan and not watch. And then the other part of me just needs to see the train wreck. WWZMD? (What would Zack Morris do?) I say he'd be curious and watch — although maybe Zack Morris shouldn't be my moral compass.