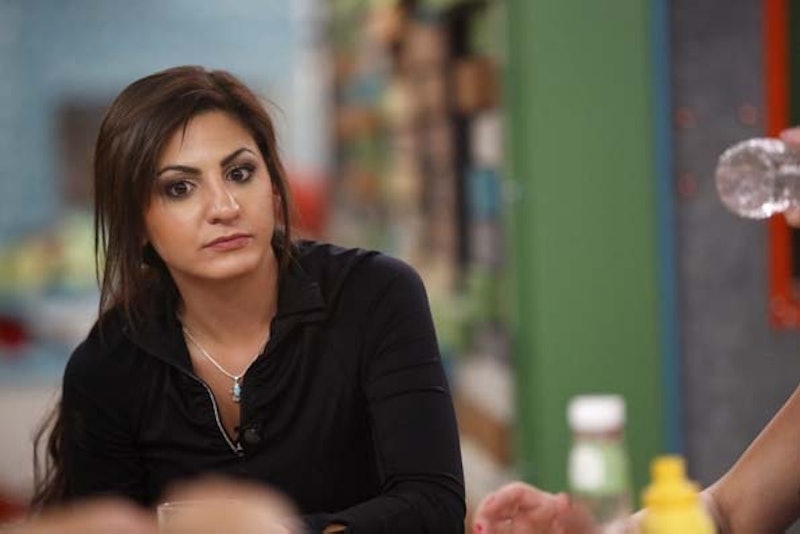 When this season first started, Frankie Grande was one of Big Brother' s most well-liked houseguests. He was made a member of Team America just a few weeks in, and his showmance with Zach Rance only increased his popularity with fans. But Frankie's been showing a different side of himself recently (or maybe we're just now seeing a different, less glowing edit). On Saturday, he made a series of offensive comments that showed his true (and truly mysognistic) colors, when he joked with other houseguests about getting fellow houseguest Victoria Rafaeli drunk and raping her.

Frankie, Christine Brecht, Caleb Reynolds, Cody Calafiore, and Derrick Levasseur were all hanging out and discussing who wanted to have a drink that night in the house. Cody and Caleb both said they would partake, and then Caleb suggested Victoria would as well. At that point, Christine jokingly begged Cody, "Please don't make love to Victoria tonight. She gets very fiesty, you're gonna be drunk." Frankie then chimed in, saying that Cody and Caleb should "both double-team her." Cody just laughed it off, while Caleb answered, "We would ruin her. There would be blood all over the place." Frankie continued, "I think you should take all of her virginities in one night. All of them." (Earlier in the season, Victoria told some houseguests that she is waiting until marriage to have sex). In response to Frankie's vile suggestion, Caleb said, "That is so foul." Frankie just smirked.

Frankie is a 31-year-old man. (Victoria, by the way, is 22.) There is never an appropriate age to joke about rape, but by this point in Frankie's life, the fact that he still finds this material so hilarious demonstrates there is something seriously wrong with his perception of women's autonomy. Let's not forget, just a few days ago he also told the house he things lesbians choose to be gay, though men do not.

Derrick, who is one of the older castmates in the house and a police sergeant , made a halfhearted attempt to end the conversation, saying, "Her father is probably watching right now and literally cringing." Yes it's nice that Derrick made an effort (however weak) to get the others to quit joking around about raping someone, but he should have been able to come up with a better reason than that Victoria's father would be grossed out. Maybe something along the lines of, "Victoria is a human being and therefore doesn't deserve to be treated as a walking piece of sex. Stop casually talking about physically violating this person you've lived with for an entire summer." But no, how Victoria's father might feel was his strongest argument against continuing the conversation.

And even that feeble attempt proved too much for Derrick, who then continued to laugh and joke with the rest of the Detonators. He implied that it would be easier to have sex with Victoria "with the Zingbot glasses on, the goggles on." In response, Cody said, "Oh dudes, that's fucking terrible," but he also laughed along. Frankie bounced on the bed, clapping and whooping at Derrick's suggestion. Just watching his reaction is infuriating. Frankie added to Derrick's comment, saying, "No, get the beer goggles!" which Caleb and Derrick found so hilarious that they both scream-laughed in amusement. Frankie then spent the next minute miming Zingbot raping Victoria, complete with sound effects.

Most of the other Detonators laughed along, but they seemed to get increasingly uncomfortable with Frankie's antics, and their laughter turned awkward pretty quickly. Cody covered his eyes and said, "No, no, no," but Christine egged Frankie on, saying, "That would be so funny." What?! How could another woman possibly think a vivid reenactment of rape is comical?

When it seemed like Frankie was finally done, Caleb raised his eyebrows and commented, "Wow, ok. A little inappropriate." In what universe is CALEB the person telling others that someone has gone too far? In response to Caleb, Frankie started his imitation again, just as enthusiastically as before, this time sticking his fingers in his mouth before miming raping Victoria. At that point, Derrick said "This is making me feel very uncomfortable, it's making me feel very uncomfortable, you are a sick fuck," though his tone was not as serious as Caleb's and he laughed halfway through his sentence. The other Detonators were still giggling when the video ends. Many Big Brother fans were outraged over Frankie's behavior, and demanded CBS take action.

Does the cast of Big Brother not realize that everything they say is being documented and streamed out to millions of viewers? Do they just forget that they are constantly on camera and connected to microphones? Well, maybe it's good that they did. We finally saw the depths of Frankie and some of the others' sexism and disrespect, and it certainly left an impression. And it seems to have left an impression on Victoria's family as well. TMZ reports that Victoria's mother wants an apology from the entire Grande family (including Arianna), and that she wants Frankie to personally apologize to Victoria. Something tells me that, as conceited as Frankie is, that's not going to happen

More like this
'Bachelorette' Vet Clare Crawley Revealed Her Stunning Wedding Photos
By Stephanie Topacio Long
Rachel Responded To 'Bachelor' Fan Theories About Her TikTok With Clayton
By Grace Wehniainen
Erika Jayne's Estranged Husband Tom Girardi Has Been Indicted On Fraud Charges
By Jake Viswanath
Everything To Know About 'RHOSLC' Season 4
By Jake Viswanath
Get Even More From Bustle — Sign Up For The Newsletter
From hair trends to relationship advice, our daily newsletter has everything you need to sound like a person who’s on TikTok, even if you aren’t.