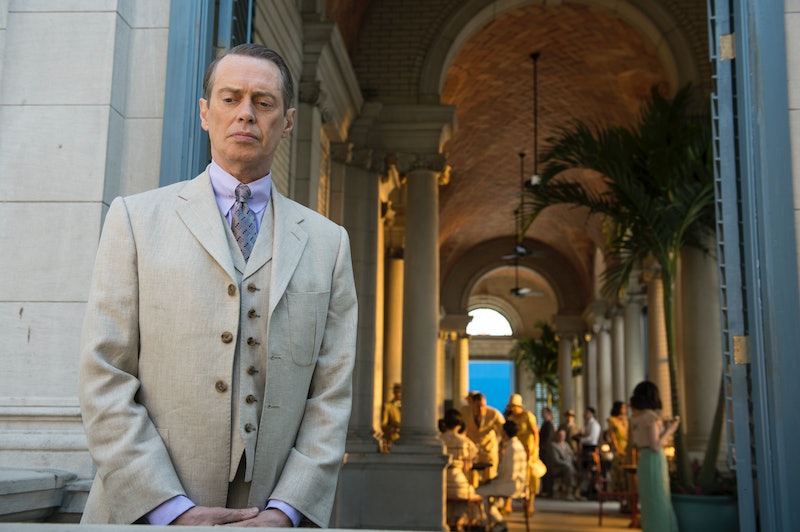 The promos for the final season of HBO's period crime drama Boardwalk Empire have been promising us that "no one goes quietly" — and judging by the extremely bloody four years that preceded Boardwalk Empire Season 5, the writers are going to keep good on that promise. Over the course of 48 episodes, we've seen people shot, stabbed, strangled, drowned, and blown up. No one is safe — not even fan favorite characters like Jimmy Darmody and Richard Harrow (RIP, gentlemen). In fact, like network sibling Game Of Thrones, it's often the best and most noble character who perish while the most despicable live to see another day. (If there's one thing we want from the final season, it's for Gillian to endure unending torment.) And with 10 months between us and the Season 4 finale of Boardwalk Empire, it would be natural to forget a detail or two.

The final season may be cruelly short — consisting of only eight episodes instead of the usual twelve — but it will undoubtedly pack in as much as possible: the show is skipping ahead seven years into the midst of the Great Depression, which is likely to be a tumultuous time for all the characters.

But before we get to start all the drama, here's what you should remember from last season:

FINALLY. This awful, awful woman finally got what was coming to her, as she landed in jail for the murder of faux-Jimmy. Richard helped her on her way to the Big House by providing the prosecutors with the body of the real Jimmy, which Nucky had had buried after his execution in Season 2. Judging by the promos for Season 5, Gillian doesn't seem at all happy with her new accommodations.

Al Capone takes over the empire.

After a failed attempt on his life, Torrio finally hands over the reigns of his entire mob empire to Capone, thus completing the gangster's four-season rise to power.

After a run-in and flirtation with Margaret earlier in the season, Arnold Rothstein offers to provide her with new lodging for her and her children if she helps him with an insider deal. In the season-ending montage, Rothstein showed Margaret her swanky new Manhattan digs. This can't end well for the former Mrs. Schroeder, as the real-life Rothstein was actually murdered in 1928 — several years before Season 5 takes place, which means his doom must be imminent.

Nucky himself didn't play too active a role in any of the finale's bloody climaxes, although he was a master manipulator behind the scenes. He almost shoots his brother Eli for trying to betray him to the FBI, but ultimately spares his life at the request of Eli's son Willie. This pushes Eli into a dramatic confrontation with Agent Tolliver (more on that soon). And when Richard comes to Nucky for help in locating real-Jimmy's corpse, Nucky sees an opportunity to benefit from Richard's desperation. He agrees to give up the body if Richard does him a favor: take out Dr. Narcisse, once and for all.

Eli vs. Tolliver: Fight to the Death.

When Eli fails to serve up Nucky on a silver platter, Agent Tolliver goes off the deep end. He promises to make good on his blackmail and send Willie to prison for murdering his schoolmate, which in turn sends Eli into a blind rage. The two men have an all-out brawl in Eli's living room, and it is perhaps one of the most brutal hand-to-hand fights ever choreographed for television. Though it's impossible to predict who will win as the tables turn so often, Tolliver is ultimately the one who loses his life, as Eli chokes him with his own tie, pummels his face with his fists, and then smashes his skull in with a vase. Nasty stuff. And all in full view of his wife and children, too. Wanted for the murder of a federal agent, Eli flees to Chicago, where he's picked up by Van Alden.

At Nucky's request, Richard sets up a sniper's nest in the Onyx Club for the climactic meeting between Chalky White and Narcisse. Unfortunately, an relatively simple assassination is botched when Narcisse reveals his trump card: Chalky's daughter Maybelle, who was being held hostage after a chance run-in with Narcisse in Episode 10. Maybelle steps in front of Richard's target just as he fires, and she takes the bullet instead, much to her father's horror. Richard is shot in the ensuing gunfight, though both he and Narcisse manage to slip out of the Onyx; the latter is scooped up by J. Edgar Hoover to become an informant against the "seditious" Marcus Garvey.

Richard goes to that great boardwalk in the sky.

Next we see Richard, he's on a train and then joining Julia and little Tommy in the Midwest (where he sent them to stay with his sister's family). Unfortunately for him — and us — it's just the fever dream of a dying man; Richard has collapsed under a symbolic boardwalk, where he bleeds out onto the sand as Season 4 draws to a close.