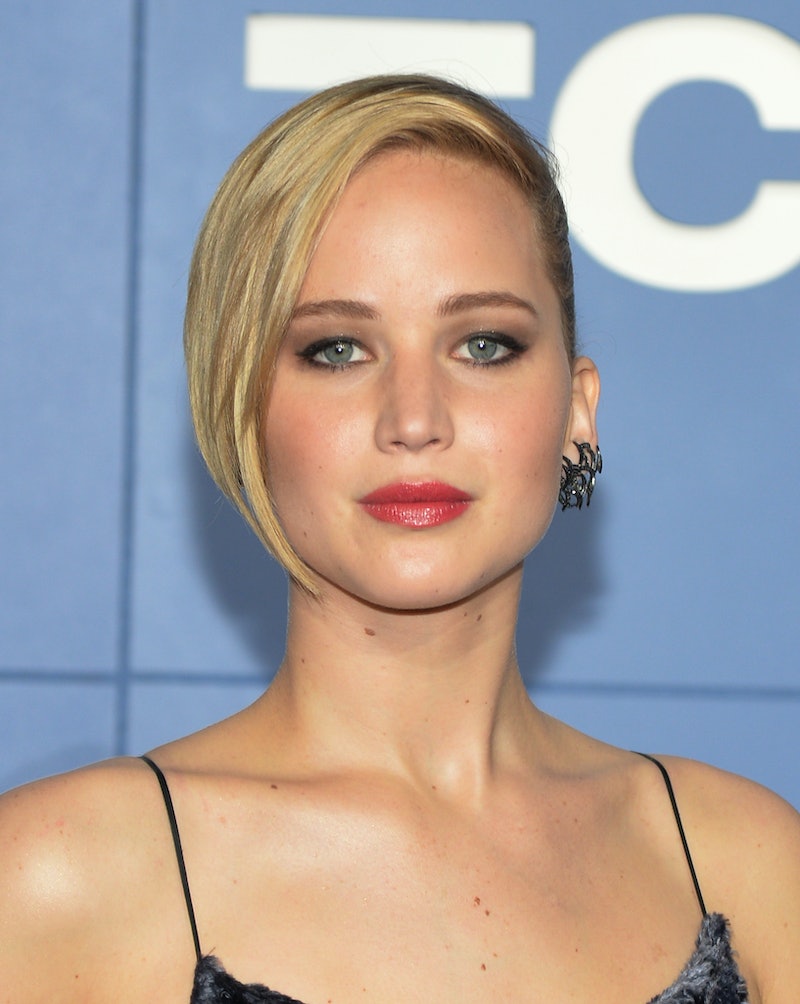 It's yet to be seen what kind of legal action the hacker who leaked over 100 celebrity nude photos will face; so far, we know that the FBI is investigating the 4chan user who hacked into iCloud to gain access to the private photos of a slew of female celebrities, including Victoria Justice, Kate Upton, Ariana Grande, and Jennifer Lawrence, who, unfortunately, has become the face of the story. I hesitate to call it a scandal because that makes it seem like the essence of taking private, nude photos is a scandalous act, when really the blame here lies with the flagrant violator of these women's privacy. When "scandals" like this erupt, it begs the question: Why do we click? And further, when male celebrities post nude selfies on their own social media accounts of their own volition, why is the reaction primarily good-natured, when female celebrities that try to possess the same kind of agency are scandalized?

Most recently, John Stamos posted photos of his timeless abs on his Instagram to celebrate his 51st birthday with a braggy, nonchalant air: "51 no filters, F it," he captioned the photo which almost but not quite reveals his junk. The comments on the picture were of the "fanning myself" variety, and notably absent was an attitude that questions why Stamos should post a picture like that in the first place. He's proud of his body, and he owns it, and he wants to show it off, so why shouldn't he? Similarly, earlier this year in May, James Franco posted and then quickly deleted a self-censored nude photo to his Instagram, followed by Justin Bieber in an effort to . . . well, it's unclear what he was trying to do, as is always the case with Bieber. Regardless, all these dude nudes were self-posted, and though appropriately gawked at and discussed, there was nary a mention of "scandal."

In the case of these recent hacked nudes, there's no question that the privacy of these women was severely violated and several female celebrities who were not exposed have expressed their solidarity and empathy for the likes of J. Law and Ariana Grande, including a strong response from Yvonne Strahovski and another from Lena Dunham that succinctly explains why the "they shouldn't have taken those photos in the first place" argument is akin to victim-blaming. But what about when female celebrities do post nude or exposed photos of their own volition? The response is strikingly similar, as if their own agency in exposing themselves shouldn't even be an option. When Rihanna posted a topless cover photo from Liu magazine earlier this year, her Instagram account was shut down, launching a thousand Free the Nipple ships. Miley Cyrus has posted a number of topless selfies to her Instagram account, all cleverly posed so to not quite expose her fully, and our own Bustle writers have noted that the naked photos might be a bit too much.

It's the old, old double-bind tale: There's a desire for female celebrities to own their sexuality, but when they flaunt it themselves, like Riri and Miley, they're ostracized and slut-shamed. And when their photos are hacked into and exposed without their permission, they're shamed for not "knowing better." And yet, people click either way — it sends a message that these women have no ownership in either situation. They're ridiculed if they post themselves, and they're ridiculed if they're hacked, but either way, the same shamers are the ones seeking out the photos. Meanwhile, male celebrities seem to have an unspoken control over their image — male nudes are seen as novel and almost humorous, but rarely scandalized.

Why do people want to indulge in the voyeurism so much with female celebrities? It's so sad that they are exposed and hyper-criticized even when they are the victim of privacy violation, yet when they try to take matters into their own hands, that ridicule still stands.