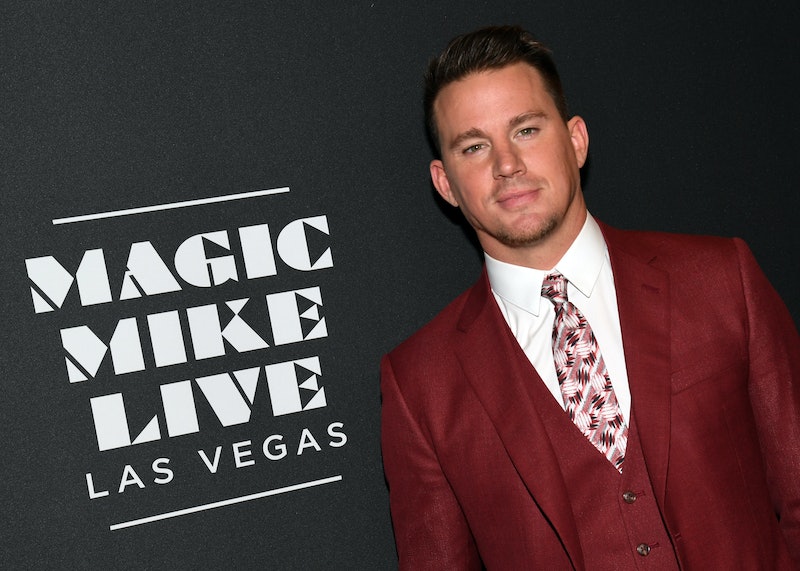 This weekend, while you were hurriedly trying to get one final margarita-by-the-yard in before the end of summer, Steven Soderbergh was devoting his Labor Day to more important pursuits. The Magic Mike sequel Magic Mike XXL began production this week.

The sequel — which will pick up where the last film left off — will do more than give us more semi-nude quality time with returning co-stars Channing Tatum and Joe "Big Dick Richie" Manganiello (though, uh, of course, there is that). It will also add one more entry to the small but surprisingly diverse library of media depictions of male stripping.

There's a rich history of female strippers on celluloid, from 1962 Sondheim musical Gypsy, to the 1995 Elizabeth Berkely camp-gasm Showgirls and beyond. Playing a stripper is even a kind of rite of passage for young actresses — I mean, how else can you explain the fact that Queen Amidala herself has shaken her thing across the big screen, in 2004's Closer ?

But the history of men playing strippers is a little bit thinner on the ground, if simply because men didn’t start professionally stripping until the 1970s. Chippendales, the best-known name in male stripping, first set up shop in 1979. But male strippers still have a varied, if not necessarily deep, history in the pre-Magic Mike media world. So sit back, get out your crispest $20 bill, and get ready to stuff it down the bulging jock strap of the history of male strippers on TV and film.

1979: The Misadventures of Sheriff Lobo

In the season one episode “Disco Fever Comes to Orly,” the titular sheriff is shocked to find that the “very classy strip disco” coming to town is a male strip club – marking one of the very first depictions of male stripping in TV and film.

This made-for-TV movie followed down-on-his-luck New York City actor John, who finds success as one of the semi-nude buckaroos at male strip joint Club Max. This film not only represents the first in-depth depiction of male stripping on TV, but also the first film or TV show where male stripping was depicted as a thing women might enjoy, rather than just a silly punchline.

A college student who moonlights as a Daft Punk-lookin’ stripper romances his college professor in an attempt to get a better grade, and eventually gets kidnapped by her jealous husband, in this crass attempt to cash in on the male stripping "craze." It bombed at the box office (but, OK, fine, Ricky the Rocket is adorable).

This film is more in league with goofball '80s comedies like Caddyshack or Meatballs than Magic Mike — but Larry the high school stripper does make an excellent Zorro.

Proto-Channing Patrick Swayze and comedy genius Chris Farley go head-to-head in this infamous skit where the two men are pitted against each other during an audition for a single open spot at Chippendales. Watch for the hilarious dancing in the middle, not the weirdly mean fat jokes at the end.

This British dramedy about out-of-work steel mill operators who form a male strip troupe to earn some money (and vow to do “the full monty,” a.k.a. show their junk) was a wildly successful hit, winning multiple BAFTAs, inspiring a 2002 Broadway musical, and introducing a whole new generation Hot Chocolate's "You Sexy Thing."

A pre-fame-ish Adrian Brody co-starred in this 1977-set crime drama as a mohawked musician, male stripper, and occasional prostitute. His big exotic dance scene involves some revealing denim shorts but no actual stripping, as Brody cuts up a big stuffed doll with a knife. Presumably, this passed for male stripping because the late '70s were very troubled times. Knife-wielding weirdness begins at 1:00 in the video below.

The season one episode “Pier Pressure” marks the first reference to Gob Bluth’s former tenure with the male strip group Hot Cops, whose mythos grows throughout the series, culminating in the faux police officers developing their own stage show with Tobias Funke.

Though this scene has the film's warring brides taking a trip to male strip club Mantasia, where they cavort with a dude in silver Speedos, it’s most notable for featuring future Academy Award winner Anne Hathaway doing some dirty squat-thrusts in short-shorts and then twirling around on a rope swing. I dreamed a dream, indeed.

In the season three episode “Hold on to Sixteen," we learned that Chord Overstreet’s Sam had become “White Chocolate,” a construction-behelmeted stripper at a club called Stallionz, to help support his family. And Rachel Berry could only bother tipping him a single dollar? For shame!