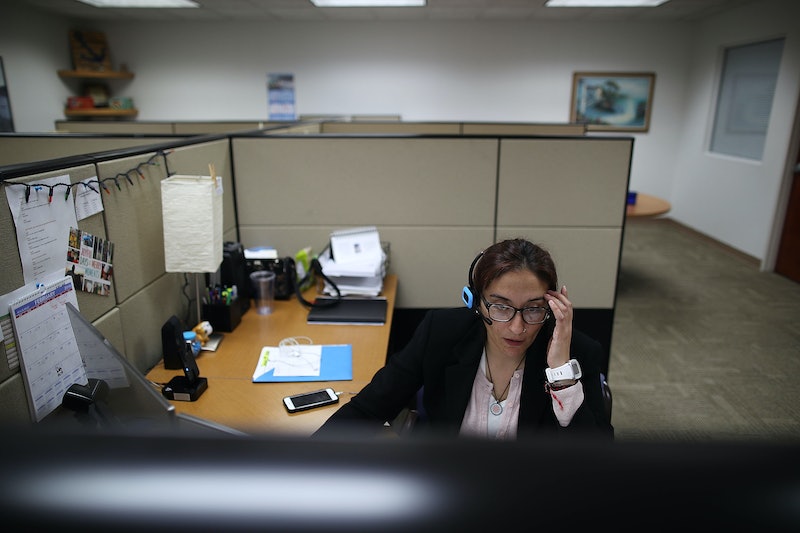 Congratulations! After spending years holding down a work study gig at your university’s sewage treatment facility and completing internships that turned out to mostly be about filing your boss’s taxes/ picking up your boss’s kids/ covering for your boss’s many, many marital indiscretions, you’ve finally landed yourself a job! A real deal, 9-to-5, pays-in-actual-money-not-nebulous-philosophical-concepts-like-“life-experience” job! This was the goal all along, right?

While you are definitely right to be thrilled about finally having a career path, health insurance, and a desk to decorate with all kooky crap you impulse-bought from Etsy, you need to know now that there is also a dark side to office life.

While traditional office jobs offer a great opportunity to make some money, develop some marketable skills, and never pay for pens or scotch tape ever again, they also tend to involve a set of frustrations and annoyances that are shockingly similar, no matter where you’re working, or what you do there. It’s as if every corporate office building is actually that hotel from The Shining, eternally haunted by chatty ghosts who always want to make small talk while you pee.

According to one survey, 70 percent Americans are disengaged from their jobs — and honestly, you may soon be one of them, after a few months of filing TPS reports and being yelled at for filling out the Receiving Billing (not the Receivable Billing) form. But knowing is half the battle — so read on, and maybe you won’t end up wanting to shove a company-issued stapler through your skull (Human Resources will need you to return that stapler on your way out).

SOMETIMES, you won't SEE THE SUN ALL DAY

Oh, a window/ the vaguest, most tenuous sense of connection with the outside world? Yeah, those are just for senior employees, sorry! But if you work here for another nine years, we can definitely begin to think about talking about eventually planning on getting you a desk near a window. For now, you can just tack up this picture of a window that has been helpfully provided by HR. Look, the people on the street are waving to you!

SILENTLY WORKING AT A COMPUTER ALL DAY sucks

Sure, some days you’ll hit the ground running at 9 a.m. and feel like a superstar at the end of the day because of all you accomplished. But others, you will spend what feels like 45 minutes max scrolling through a few embarrassing gossip websites to “warm up” for your work, only to look up and realize that it has somehow become 4:30. Get ready to feel lazy and out of shape.

you likely won't have a lunch break

Most people eat at their desks. And if you do get out with some of your coworkers, do you really want to accidentally blow $12 on a side salad and Diet Coke? Or would you prefer to get on that eight-person-deep line to use the one microwave that always burns your food? Either way, you’re guaranteed to feel insecure about your life decisions, and spend the first half hour after lunch wondering if it’s too late to get in on that organic sheep farm in New Zealand that your old roommate is working on.

the PARTIES will be boring

Do you love any excuse for a party? Well, that’s because you’ve never been to a party held in a conference room with no music or alcohol, all the lights on, and sheet cake that tastes like actual sheets. Just wait til some smart ass decides to lead everyone in a round of “Happy Birthday,” which your co-workers will all sing in the key of “I wish I was dead.”

SOME OF YOUR COWORKERS WILL BE TERRIBLE

It's a lot like college, in that there are just going to be some people you inevitably won’t get along with. But unlike college, your ongoing ability to pay your bills may be dependent on your ability to prevent yourself from referring this person as a “fucking hoser” out loud.

THERE WILL BE ENDLESS, POINTLESS “UPGRADES” TO THE OFFICE MANAGEMENT SYSTEMS

Your office changed DPT systems, so now instead of Synaco, you have to use Alta, except when you’re logging Q3 reports next week, then you’ll have to use a new system we’ve just brought online called “La Salsa.” Confused? Don’t worry, there’s a special lunchtime training program, where you can spend your one precious hour of freedom per day locked in a windowless room learning about this new system that will almost definitely be irrelevant within three months.

you will have no personal space

Used to being able to sit at your own desk, pee, or stand around in a copy room without anyone asking you about “how your day is going”? Well, once you're on staff, your office will be full of strangers who will demand to know "how your weekend went" with such ferocity that you’d think your answer contained the cure for cancer. Your cubicle will seem to have been specially designed to funnel in the sounds of one coworker arguing with her boyfriend over the phone, another complaining about their kids, and those two doofuses from Design who think that nobody knows they’re dating.

THERE WILL BE A LOT OF BORING MEETINGS

Most of the hour-plus meetings you attend will be about topics that could have been covered in a 50 word email. But if your boss had done that, s/he couldn’t have confirmed that you all noticed it. With a meeting, they can be 100 percent confident that everyone on staff will be completely tuned out, ignore whatever it is that they have to say, and spend the rest of the day Gchatting with friends out of a misplaced sense of vengeance.

IT WILL ALWAYS BE TOO HOT OR TOO COLD

Pleasing the 500 people who work in your building with a single temperature is tough, and unfortunately, you were not part of whatever focus group decided that it should be heated to a breezy 93 degrees in the winter and a frigid 60 in the summer.

I heard that there’s a storeroom on the 5th floor that’s usually empty and has decent cell reception. Tell your boss that you’re going to the 4th floor to make copies because the copier here isn’t working. To get there, you’re going to want to use the back elevator bank, because if you use the front elevator bank, you’re going to have to go by Chelsea’s desk, and she’s going to start asking you how your weekend was, and that's 15 minutes right there. If all of this fails, create a crude dummy of yourself from waded-up interoffice envelopes and paper clips, and take this call behind the loading dock.

YOUR BOSS likely won't give a shit about you

A supportive boss can make your day/ working life/ career. A shitty boss can send you into therapy with their constant passive-aggressive comments about how their lattes never used to be this foamy when their old assistant used to get them. And the terrifying part is, there is almost no way to tell these two kinds of bosses apart until you’re in way too deep. Most likely though, your boss will mostly ignore you because they are so busy, which is almost more insulting than if they hated you.

YOU WILL actually become a klepto

When you get passed over for a promotion, when your boss passes off your idea as their own, or when your totally reasonable request for a raise gets blown off like it was a child’s letter to Santa, you will grow so angry that you will fight back the only way that you know how: by going into a supply room, and emptying all the shelves directly into your purse.

there is no jim halpert waiting for you

I'm sorry. This is really the cruelest reality of all.

More like this
These Cheap Things With Near-Perfect Amazon Reviews Will Make Your Home Look SO Much Better
By Dena Ogden
15 Genius Storage Solutions For Your Next Bathroom Refresh
By Emma Garza
The 4 Most Forgiving Zodiac Signs
By Kristine Fellizar
The 3 Most Honest Zodiac Signs, According To Astrologers
By Kristine Fellizar
Get Even More From Bustle — Sign Up For The Newsletter