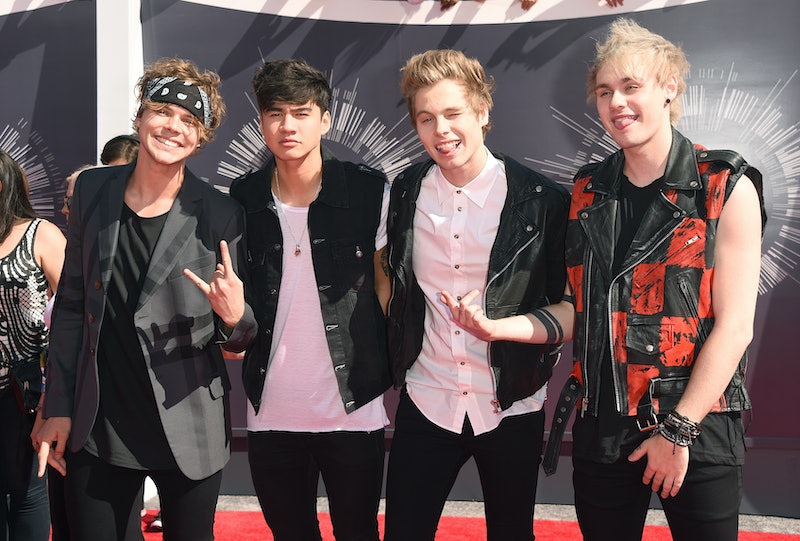 Thursday morning, BBC Radio 1 show "Live Lounge" welcomed a very special guest to the studio: 5 Seconds Of Summer! AHHHHHHHHHHHHHHHHHH [faints]. Calum Hood, Ashton Irwin, Michael Clifford, and Luke Hemmings, aka the cuties that make up 5SOS, played a pared-down version of Blink-182's “I Miss You" during their "Live Lounge" visit. (Side note: "I Miss You" is over a decade old. I'll wait while you allow that to digest.) And yes, fellow late '90s/early '00s pop-punk fans, there is video evidence.

If you've planted your feet firmly in the “5SOS is a boy band, not a band band” camp, I implore you to watch their BBC Radio 1 performance. It's very band band.

Now, there isn't anything wrong with boy bands (hi, major boy band fan right here), but 5SOS is not one. They are a pop/punk/rock band. A band band. (To those of you who say their image is contrived and they're nothing more than a boy band pretending to be a pop/punk/rock band: A PLAGUE ON BOTH YOUR HOUSES.)

(OK, that was dramatic. I don't wish a plague on both your houses.)

Let's see here.... We have two acoustic guitars, a bass guitar, and a block that's used as a drum. So rock, so band.

This is a resourceful rocker move for a rocker who does not have a drum handy.

So rock, so chill.