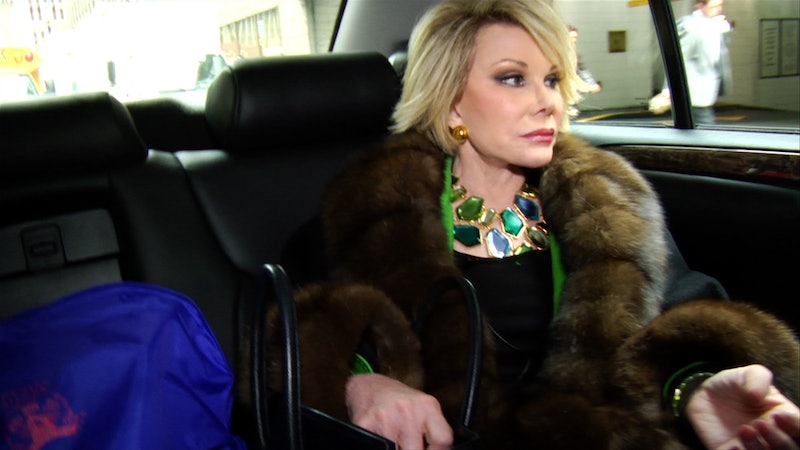 In the summer of 2010, my parents and I were traveling through the Berkshires, needing to kill a few hours before heading out to dinner. Being the pop culture-obsessed family we are, we decided to see a movie — unfortunately, our choice of films was less than satisfactory. There was Sex and the City 2, Adam Sandler's Grown Ups, and a movie about Joan Rivers, a loud-mouthed, frequently-offensive comedian none of us particularly enjoyed. Still, it was the least horrible-sounding film of the bunch, and so we hesitantly went into the theater, unsure of what to expect. And what we saw, in those next 90 minutes, was something none of could have predicted: a riveting, heartbreaking, simply fantastic look at the most hard-working comedian in the business.

Four years later, Joan Rivers has died. Fans are posting their memories and tributes are everywhere, but to me, unless you knew her personally, there's no way to understand Joan Rivers without seeing A Piece of Work . The documentary is one of the most surprising pieces of filmmaking I've ever had the pleasure of seeing, a deep, complex view of a comedy legend who was fighting to stay relevant in a time when the biggest new voices were Youtube stars and Judd Apatow's friends. Following a 76-year-old Rivers for 14 months, the film tracked her from stand-up routines to reality TV, flashbacks of romance to fights with her daughter. There was nothing it didn't cover, nothing it didn't unveil; this was the real Rivers, a fiery, determined woman thirsty for success, no matter how many years of it she already had under her belt.

And it was funny, often hilarious. Introducing the filmmakers to her massive New York apartment, Rivers called it was a place Marie Antoinette would have lived in, "if she had money." Watching her perfect her stand-up, perform her one-woman play, read off one of the literally thousands of old jokes she had filed away in cabinets — it was one long, incredible act, the brilliance of a comedian who viewed nothing in her life as anything but material for her next routine.

But beneath the comedy, there was sadness. The documentary centered around Rivers' time as a contestant on The Celebrity Apprentice, a competition, as the film captured, that she'd eventually win. Yet before her employment on the show, there were empty boxes on her calendar; in one heartbreakingly candid moment, she looked at her schedule and remarked, "the white of this page is blinding me. I need sunglasses!" She was laughing, of course, as she said it — Rivers was always laughing — but she was worried, scared busy days were becoming memories of the past.

And then there was the roast. In 2009, she was the "honoree" of Comedy Central's infamous tradition, ordered to sit onstage, endure insults from her friends, and do nothing but smile, laugh, and act like it was a highlight of her career. Some comedians, perhaps, really do enjoy their roasts, but Joan Rivers did not; she fretted over attending, scared for what her peers would say, hating the fact that, in her mind, her career had gotten so bad that a good gig meant being berated by people before a crowd of millions. The A-list comedians enlisted to do her roasting was a comfort, but a small one; if she was going to be torn apart, with no chance to defend herself, she might as well have it done by her idols.

As she sat there on that stage, forcing a smile at each slam hurled her way, Rivers never seemed so vulnerable. She was tired – not of working, never of working, but of being the butt of someone else's joke, the punchline to a one-liner on plastic surgery or old age. And we, the viewer, knew just how nervous she felt going on, how she knew it was going to be like this, no matter how much she tried to convince herself that it was the "honor" everyone said it was. It was painful to watch, her holding herself together with such sad, determined poise, but it was more painful for Rivers. This was supposedly her peak, but to her, her career never felt so low.

A few months later, at the documentary's end, Rivers was being anointed the winner of The Celebrity Apprentice, a grin traversing her face from ear to ear. It wasn't everything, of course — it was just a reality show, a new champion crowned every year — but for her, it was an enormous victory, one of the biggest she'd had during those empty calendar boxes days. In terms of scope, winning the show probably mattered less than getting a Comedy Central roast in her honor. But for Joan Rivers, it was everything: proof of her relevance, proof of her willpower, proof of her worth.