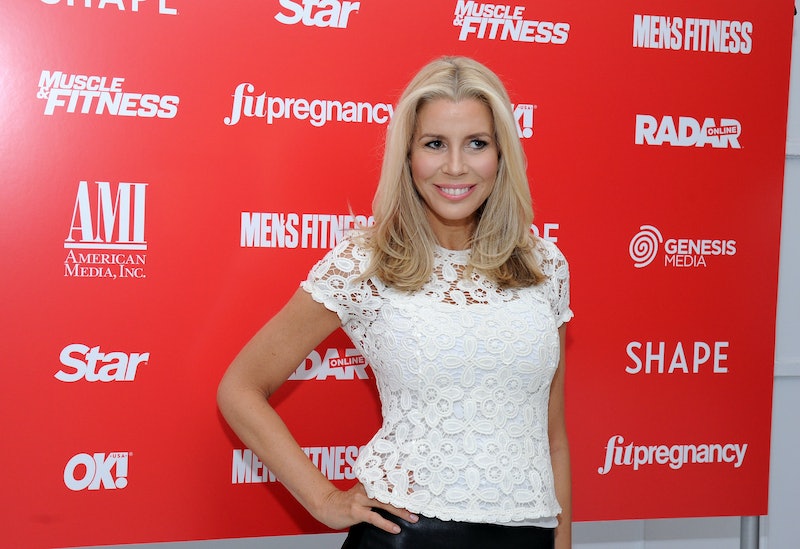 Apparently throwing your leg across a room doesn't get you anywhere anymore. According to Us Weekly, Aviva Drescher has been fired from Real Housewives of New York. An anonymous source reported the news to Us, and if it's true, Aviva being fired isn't exactly be a surprise considering she was randomly removed from the title slide during a few episodes last season. Where is Aviva and her apple? I thought while watching. And now it seems Aviva's apple-toting days are over for good. Well, unless she comes back as a Friend of the Housewives like Countless LuAnn. (You're still a Real Housewife in my heart, LuAnn.)

In addition to being removed from the RHONY title sequence at times, Aviva didn't really get along with any of the other women. And I'm not talking in a "this will bring the drama" kind of a way, I mean in a "seriously, we aren't going to hang out with her" kind of way. She didn't even go on the trip to Montana, and if you miss a clearly-set-up-by-the-producers Real Housewives trip, there's obviously something wrong other than your "asthma" acting up.

Hearing that Aviva is now fired, her epic leg throwing tantrum during the Season 6 finale in July might have been a last ditch effort from Aviva to maintain her Housewife status. If you didn't see the episode — well, then this is really going to sound insane — during an argument with the other women at a restaurant, Aviva took off her prothetic leg and threw it across the table saying, "The only thing fake about me is this!" I'd seen wig yanking on this show before, but leg yanking? That was a whole new ballgame.

But apparently it wasn't enough to keep Aviva her spot. Goodbye, Aviva. You brought a lot of crazy to the show but you also brought #Bookgate, and for that we will always be grateful.