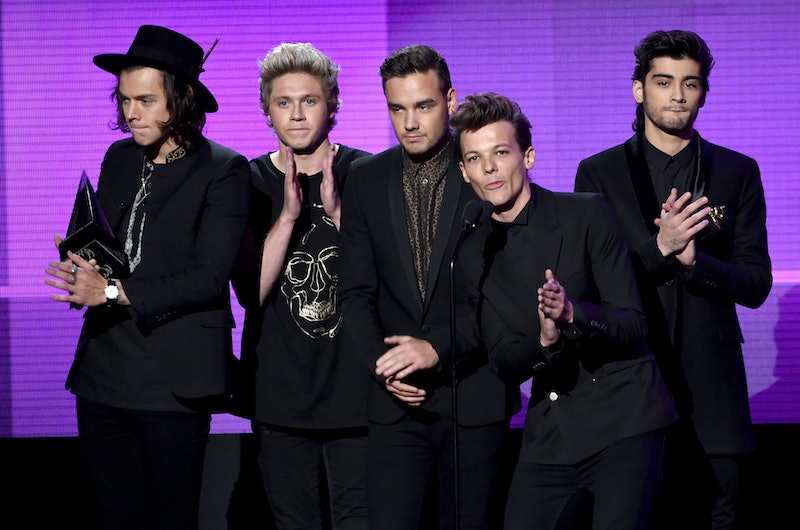 If you're a One Direction fan, you're going to want to clear your schedule for the second weekend in October. According to Variety, One Direction's new concert movie, Where We Are — The Concert Film , hits theaters nationwide for one weekend and one weekend only next month, Oct. 11 & 12. On Friday, the band released a new trailer for their return to the big screen, and it looks like it's going to be a lot of fun.

Where We Are — The Concert Film was recorded during the band's Where We Are Tour shows at the San Siro stadium in Milan in June. Variety reports that the movie features the band playing all of their biggest hits, "plus a 15-minute interview cut with exclusive behind-the-scenes footage." The big takeaway here is that between playing sold-out shows, recording their fourth studio album, and setting a new Guinness World Record, the guys somehow found time to sit down and film a (probably pretty inane) 15-minute interview about how much they love each other, their fans, and their music. Do they not sleep? I just don't know how they do it.

One Direction's concert movies are a blessing for fans who love the band, but would probably rather spend a romantic weekend in Wisconsin Dells with Bill O'Reilly than actually attend a concert in real life. The screaming 10-year-old girls, the over-priced merchandise, the inability to stop myself from belting out "What Makes You Beautiful" at the top of my lungs — it would simply be too much.

Here are the best moments from One Direction's new Where We Are — The Concert Film trailer:

When The Guys Do A "One For All, All For One" Thing Because They're Pals

When Niall Exposes a Bit of Chest, But Leaves You Wanting More

When Liam, Harry & Niall Are Feeling Their Oats

The Frolicking That Leads to This Fancy Leap

When Zayn Is Baring His Soul & Liam is Just Blowin' Kisses

When Harry & Liam Love Each Other

When Harry Sings & It's The Most ~*Beautiful*~ Sound You've Ever Heard

You can watch the full trailer for Where We Are — The Concert Film via YouTube below. Remember: It's only in theaters on Oct 11 & 12! You can book your tickets now on the movie's official website.