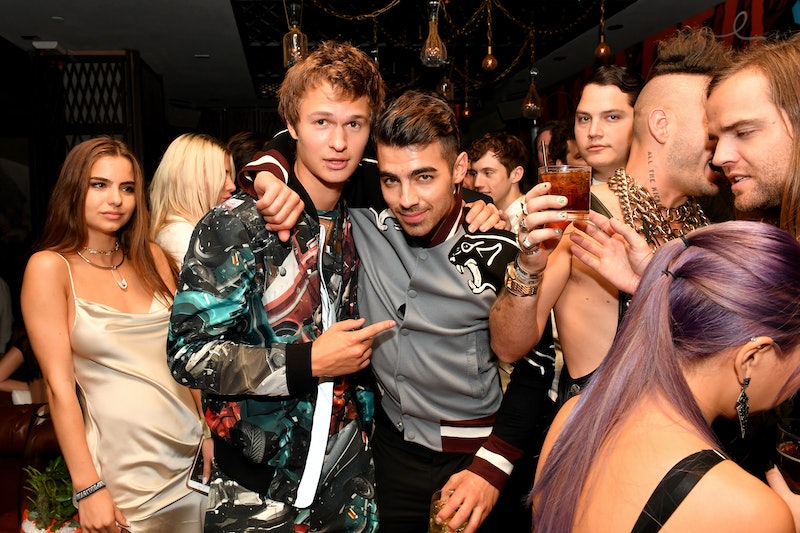 You guys. You guys. So not only is Ansel Elgort recently single, but he's also one half of the greatest bromance it has ever been my pleasure to witness. But let me back up for a moment. Ever since the news broke that Elgort had broken up with his girlfriend, fan reactions have ranged from sadness to hoping they now have a shot with the rising star. Elgort hasn't been seen out much ever since, aside from a DJing job that reminded us that he's multitalented in addition to being adorable, but it appears that he attended the U.S. Open on Wednesday, September 3. And he wasn't alone. Apparently, Joe Jonas and Elgort attended the U.S. Open together and where has this bromance been all our lives?

Elgort and Jonas both posted a silly selfie to their Instagrams from the event, but the pictures didn't go viral until more paparazzi and fan selfies hit the Internet. Suddenly, we were being bombarded by cute shots of Elgort and Jonas laughing, grinning at each other, making faces at cameras, and generally having a really good time being the two best friends that anyone could have. All right, so we don't know if they're best friends or not yet, but if you ask me then this bromance was a long time in coming.

1. They're both talented musicians.

In case you haven't heard by now, Elgort does DJ work under the name Ansølo. And he's actually really, really good at it. I don't think I need to get into Jonas' music career. If this bromance results in an Avicii-esque collaboration between the two of them, I will literally lose my mind.

2. They're both talented dancers.

Elgort can tap dance, you guys. He can tap dance. He even tried out for the School of American Ballet. Meanwhile, Jonas can do the "Single Ladies" dance. (Kind of.) Imagine the YouTube videos the two of them could make. Take a moment to imagine that level of awesomeness.

I'm going to be that person and point out that Elgort is probably a little better at the acting thing than Jonas is. After all, the Jonas brothers' TV shows on the Disney Channel didn't do that well and Jonas alone seems to have found his niche more as a musician than an actor. However, they can both relate to each other on that thespian level.

4. They're totally silly together.

I mean, that kind of goes without saying.

5. They already have things in common.

In addition to all of the above, they both like tennis and also eating dinner and walking around New York City. Okay, so they probably have even more in common than just that, but I'm just working with what I've got here.

6. They both have multiple siblings.

Elgort is the youngest of his two siblings and Jonas is the oldest of his three siblings. Older siblings and younger siblings tend to get along because they're both already used to dealing with each other's birth order quirks. It was a match made in bromance heaven.

7. Seriously, look at them.