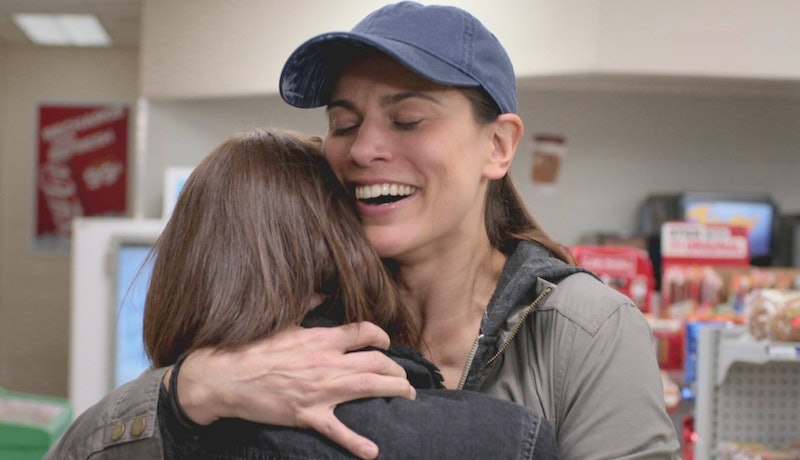 I'm not sure how MTV expected us to cope with the "oh my God" conclusion of Tuesday's episode of Finding Carter , because now all I want to do is watch the new episode right this minute. As jaw-dropping as Tuesday's episode was, it still won't be the most dramatic thing that happens this season. The finale of Finding Carter airs on Tuesday, Sept. 16, and if this show has taught us anything, it's to expect the unexpected. That's not to say that the series has given us clues to what may happen in the future: Bustle writer Christine DiStasio predicted that Crash would shoot Max in Tuesday's episode, after all. And while the next episode will certainly be about Max's fate (sob) it might also throw in something that surprises both the audience and the characters on the show: Could Lori kidnap Carter once again?

It's definitely possible. The penultimate episode of Finding Carter is titled "The Long Goodbye," which one could speculate refers to the characters' goodbye to Max. But I'm not so convinced that Max will die, mainly because ruining Maxlor would throw fans into a collective fit of rage. Maybe it's wishful thinking, but I just don't think MTV would have the heart to kill Max. He's far too awesome.

So what could the title mean? In my mind, there's one other person who could go away on the show that we actually care about (read: I don't care at all about Crash, beautiful eyes aside) and that's Carter. Carter's already tried the running away thing and it hasn't worked out too well for her. Whether she likes it or not, Carter has a strong emotional connection to her biological family. She even chose to stay with them rather than run away with her kidnapper mom, Lori. That's what makes me think that Lori may try to take Carter away, for good — whether Carter wants her to or not.

Max getting shot will have repercussions for the show, but they may not be the ones we initially expected. We know that Crash is running away from the law in the upcoming episode, and that Carter will have a very hard time forgiving him for "accidentally" shooting Max. We also know that Crash is a bonafide crazy person, and that Lori at least has, uh, "issues" to work through. Crash already knows Lori, both from the stories that Carter told him and from their chance encounter at the convenience store where Max works. (A lot of things happen at that store.) What if Lori finds Crash when he's on the run and together, they decide to kidnap Carter?

It would make sense for the two people in Carter's life who are arguably the worst influence on her to team up. Both Lori and Crash are desperately seeking family: Lori wants her daughter back and Crash wants someone to love him because he never got that from his family. Lori and Crash may think that Carter was brainwashed by her biological family — kidnapping her could be seen as a "favor" that she'll thank them for later.

Luckily, if Carter is kidnapped by Lori and Crash, she'll have the final episode to find her way back to her biological family. Carter may get lost sometimes, but I hope that her family makes sure she gets found too.