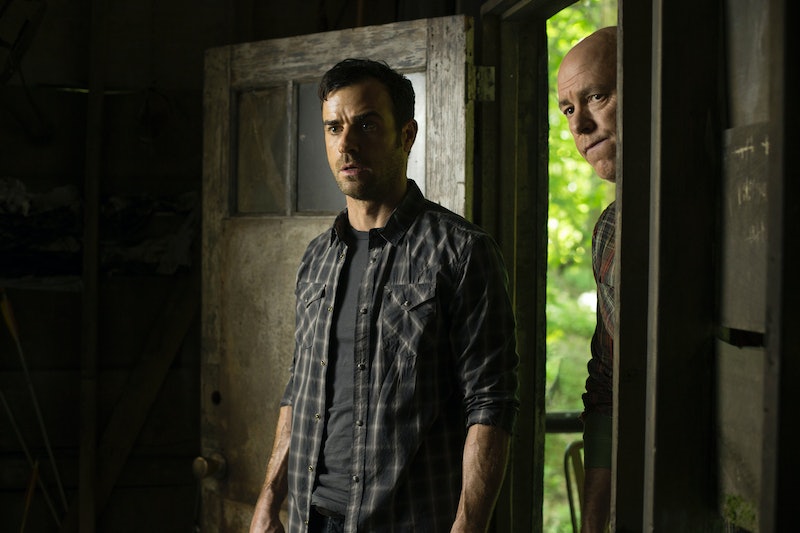 HBO's dark and intriguing series The Leftovers will air its Season 1 finale Sunday night and, to be honest, I'm assuming it's going to be a depressing one. In recent episodes we've seen the Garvey family and the rest of the residents of Mapleton, NY have their fair share of terrible moments. From the Guilty Remnant's Patti committing suicide to a flashback showing that not only did Laurie's pregnant fetus disappeared during the Departure, but Kevin was having an affair. Honestly, could things get any worse? Yes, they probably can and will. But how do we know what will happen? The series was created based on a book of the same name by Tom Perotta and while The Leftovers has several differences from the book, there are still quite a few similarities. So what does the ending of the novel mean for the Season 1 finale of the series? If Perrotta's novel is any indication (and it might not be), there will be some major changes and something of a fresh start.

Before the series premiered, there was a lot of talk about how the show would live up to the novel and how closely it would follow the subject matter. But now that so many things have changed from book to screen, the time for assuming we know the answers is long gone. The ending of the novel showed all of the characters facing different challenges. Nora decides to leave Kevin, but then finds a baby on his front step; Jill decides not to join the GR and instead pursue one of the handsome twins at school; Tom follows Christine to a new cult; and Laurie has gets mysteriously whisked away from the GR after Meg kills herself (we are never told what actually happens to her).

All this in mind, we know that The Leftovers has been renewed for Season 2, which means the show has extended past its source material. Do we really want to continue seeing these characters slowly get to their endings in the novel? No, what we want is for them to grow, and the book's open ending allows each character's story to continue any way the writers of the series want to explore.

Take Kevin Garvey, for example. Mapleton's police chief has gone through way more terrible moments than his page-bound counterpart. The guy was just supposed to be a businessman who gets elected as mayor and dates Nora Durst while having a weird relationship with his daughter's friend Aimee. But look at him on the show: he's having weird almost schizophrenic episodes, he's dealing with his crazy father, and the show's flashback showed him being unfaithful at the exact moment his wife watched their unborn child disappear from her sonogram.

We've also seen quite clearly that the Guilty Remnant is gearing up to do something terrible to the Mapleton citizens, which means Kevin will not only have to deal with them in addition to the fact that GR's Patti has committed suicide. His daughter Jill has now also joined the GR and his relationship with Nora is complicated due to many factors, one of which is Jill's friend Aimee. And then there's Jill herself, who doesn't trust her father's new girlfriend. Even if Tom were to drop off Christine and Holy Wayne's baby on his father's doorstep and Nora decides to adopt the child, all that would do is add more stress and difficulties to Kevin's already full plate. Perhaps the show should put aside the book's ending and focus on the major problems already at hand.

And what about Holy Wayne? In the novel, Wayne eventually confesses to his sins leaving Christine and the rest of his compound shocked and betrayed. Tom tries to help Christine by convincing her to care for her son whom she originally thought was the "son of God" but now can't stand to look at him. She eventually leaves her son and Tom to join a different movement while Tom leaves the baby on his dad's doorstep and goes after Christine. The promo for the Season 1 finale "The Prodigal Son Returns" shows Wayne contemplating his mistakes, but I wonder what direction the show will take for Tom and Christine. In this case, watching the pair interact with a new cult could be interesting and since the book left their ending wide open, the series can do a multitude of things with their story.

Basically, there is no shortage of directions The Leftovers can take in the future as they are not bound by the rigid walls of a book series — the novel opens the characters' journeys up to so, so many possibilities. The Leftovers author Tom Perotta is a co-creator, executive producer, and writer on the show, so it's not as if the direction the show is taking seems too blasphemous. The most important thing the show should (and seems to) maintain is how people change in the face of tragedy. Violence, love, depression are bound to come out and the series, while occasionally over the top with symbolism, shows us all of these feelings and more. I can't wait to see how develop the story and these people beyond their written counterparts. There's still so much left to be discovered.