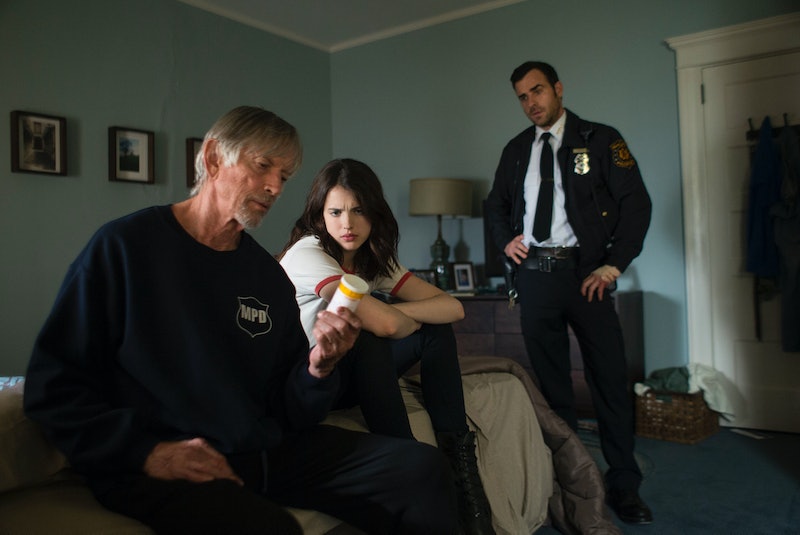 This coming Sunday, HBO's newest drama, The Leftovers will air its Season 1 finale and it's sure to be a bloody affair — this is HBO, after all. Has there ever been a season finale of an HBO drama that didn't end in blood, death, and tears? Probably not, and the promos for the final Leftovers episode, called "The Prodigal Son Returns," promise more of the same. There are flames. There are bloody faces. There is lots of shouting. Clearly something bad is going down in the town of Mapleton, New York. Have the Departed returned (as the title seems to tease)? Have the Guilty Remnant enacted some dastardly plan? Has Mapleton been invaded by aliens?

While we don't yet know the nature of the climactic event (not even readers of Tom Perrotta's novel, since the show has departed so drastically from its source material), we can only guess at who will survive the carnage. Surely not everyone in the sprawling cast can make it out alive — there's bound to be at least one fatality, right? I mean, this is the same network that brought us the Red Wedding, guys. So, in preparation for the finale, let's rank the main characters on their likelihood of joining the Departed in the Great Beyond:

As Mapleton's Chief of Police, Kevin is bound to be in the middle of whatever action will unfold in the finale, which will surely place him squarely in danger. But come on — Kevin's the protagonist, so Justin Theroux and his jogging pants are going nowhere anytime soon.

While showrunner Damon Lindelof hasn't flinched from showing us graphic stonings and dog murders, we'd be surprised to see the show start killing off innocent children. Even though joining the Guilty Remnant likely will put Jill close to the conflict, I fully expect her to make it out alive. The four Garveys are the main characters of Perrotta's novel, and even though the show is drastically different, they're likely to remain the show's focal point as well.

Like his sister Jill, he's likely not going anywhere anytime soon. But if one of the Garvey children were to be killed off, my money would be on Tom over Jill. He's the one sheltering the pregnant mistress of an insane polyamorous cult leader from the FBI, after all.

Since the Guilty Remnant seems to be central to whatever conflict is happening in the finale, Laurie seems to be in the most danger of all the Garveys. If the show really wanted to shock viewers and leaders alike, they could potentially have her perish unexpectedly. Since Jill never joined the GR in the novel, the writers could be priming her to take over her mother's role in the plot after Laurie dies. Hypothetically speaking.

Nora Durst is the only character in Perrotta's novel outside of the Garvey family to have chapters told from her perspective, which makes her just as unlikely to succumb to some fatal encounter. Plus, she's kind of the best character, so Lindelof would be crazy to write her off so soon.

Reverend Matt Jamison seems to have something of a death wish, which is why he finds himself in the upper half of my ranking. Whether he's getting in fights with thieves in the parking lots of casinos or harassing the Guilty Remnant, he can't seem to help but put himself in harm's way. Plus, he thinks he's getting signs from God which probably means he's delusional. (Or is he?) On the other hand, Christopher Eccleston is such a compelling actor, it would be a shame to see his character killed off before the show has really utilized the full extent of his talents. (His focal episode, "Two Boats And A Helicopter," was one of the highlights of the season.)

Remember all that talk about how the writers changed Kevin's occupation from mayor to police chief in order to make him more central to the town's conflicts? Well, what if that was all just masterful misdirection to hide the truth: that Mayor Lucy Warburton is going to bite it in the Season 1 finale, paving the way for Chief Garvey to ascend to the mayorship and assume the rightful role of his literary counterpart?

Chief Garvey's dad has been acting erratically ever since we first met him talking to his invisible friends in an old folks home. He has since escaped from the institution and seems to think, like Matt, that he's some sort of prophet. Throughout history, TV shows have delved more drama from father/son relationships than any other motif, and the tragic death of his maybe-crazy/maybe-not father would certainly send Kevin, Jr. on an interesting emotional journey in Season 2.

The creepy hug-dispensing, young girl-impregnating cult leader seems primed for the chopping block, especially considering how he keeps predicting his own death with the calm acceptance of a martyr. But remember that Wayne also kept predicting that Christine's child would be a boy, and it turned out to be a girl... so we don't really know how accurate his prediction of his death is, either.

But even if he doesn't actually know he's going to die because of some divine or supernatural intervention, he could still bring his doom upon himself through a "self-fulfilling prophecy." However, it's important to point out that in the season's sixth episode, "Guest," Nora attended a lecture about The Prophet's Dilemma, which is a phenomenon also referred to as "self-defeating prophecy." Perhaps in seeking out glorious martyrdom, Wayne will actually end up delivering himself — alive and well — into the FBI's hands.

Willowy Meg is first on my death-prediction list for one very good reason: she's the only character who actually dies in the book. Like Gladys, she's instructed by the GR to sacrifice herself, with Laurie's help. But when Laurie can't bring herself to pull the trigger on the partner she's grown close to, Meg turns the gun on herself. Now, in the book this was a surprise because we didn't know until late in the game that the dead GR members were being killed by their own cult. That particular point has already been revealed by Patti on the show, so perhaps Meg's fate will unfold differently on the show — but if I had to put money down on one character dying this weekend, mine is still on her. After all, movie star Liv Tyler is by far the biggest name in the entire cast; perhaps Lindelof got her to sign on by promising her she only had to commit to one season.

Meg's devotion to the Guilty Remnant has grown exponentially this season, and now she's one of its most fervent followers. If the cult is in peril during the finale, I wouldn't be surprised to see her put herself in the line of fire to save her chain-smoking brethren.