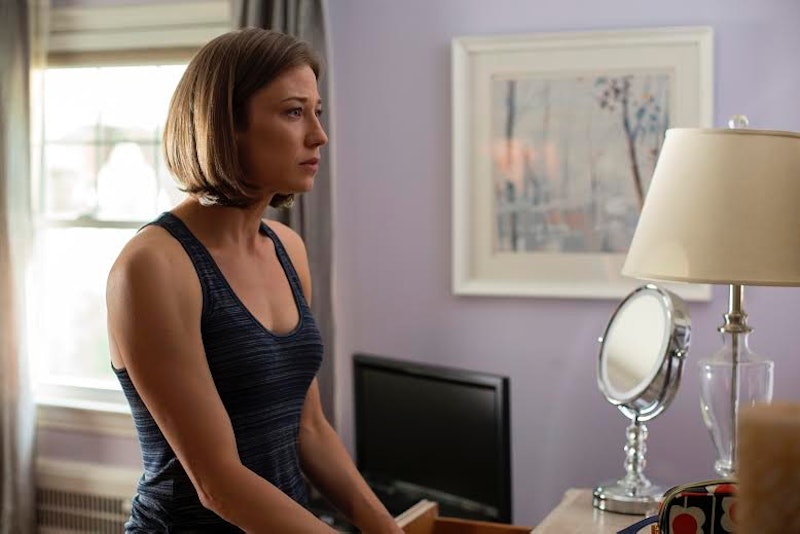 There may finally be some good news for The Leftovers' Nora Dunn. In the Leftovers' Season 1 finale of the hit HBO drama, "The Prodigal Son Returns," Nora seemed to be on the right track to happiness as she has been dating police chief and bonafide hottie Kevin Garvey, until the Guilty Remnant took all of the potential for happiness away by creating life-sized dolls of her family that disappeared during the Departure and snuck them into her home while she was sleeping. Nora's discovery of the dolls might be one of the most heartbreaking and disturbing moments on television this year. After she contemplated her future in Mapleton and her past with her family, Nora made the decision to leave the town and her new boyfriend, but not without writing him a goodbye letter. When she went to deliver the note however, Nora found a baby girl on Kevin's front porch. So whose baby did Nora find?

Despite the many changes The Leftovers series has made to the book of the same name, this one plot line is eerily similar. The baby Nora found on Kevin's porch must the same in the novel and the series: Unless Damon Lindelof is really shaking things up, the child's parents are Holy Wayne and Christine, one of his many child brides.

In the book, the man who believed he could heal people with his hugs fathered a baby with Christine who was then transported by Kevin's son (stepson in the series) Tom to safety while they waited for Holy Wayne to reunite with Christine and the baby girl. Wayne however, was not nearly the man they believed him to be Christine was completely unfit to raise a child on her own. Instead of allowing Tom to provide for their new makeshift family, Christine abandoned the baby and Tom at a bus stop.

Tom then took the baby to his father's home, left him on the porch and went looking for — and found — his mother in the last moments of the finale. Nora stumbled across the baby and most likely took her as a sign that she needed to stay and find a new life in Mapleton, perhaps with Kevin. The novel and Season 1 ends with Nora finding a child and saying to Kevin "Look what I found," but now the series has been renewed for Season 2. This ending is really just the beginning of something new and judging by this show so far, intriguing to say the least.