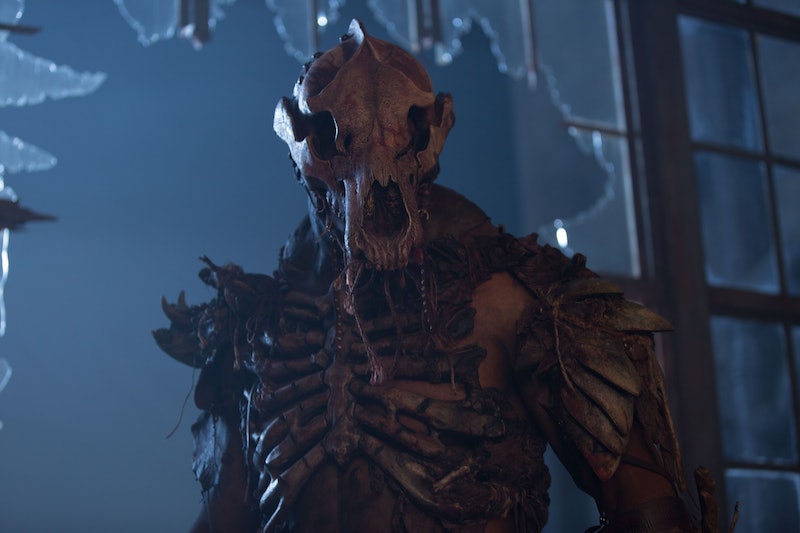 Well Teen Wolf, you win. I see no way in which Season 4 can end with happiness and safety for all of our favorite characters. Not only has this season taken away Derek's powers, given us crazy assassins that tried to kill all of our favorite characters (excluding Stiles, thank goodness), and had Peter stab Chris Argent in the stomach with a rusty rod, now Kate Argent has apparently turned Scott McCall into a berserker. Why Teen Wolf ? Do you not want your fans to be happy? Apparently not. So with this latest horrific twist, what will Scott's Wolf Pack do when they realize he's a berserker? And what will Scott do to them now that he's in berserker mode?

The most obvious answer is to figure out how to turn him back into his werewolf self, and I believe that the answer lies with the creepy Dr. Valack. You know, the guy at Eichen House who drilled a hole into his head and has a third eye in his brain? Yeah, there's no way we've seen the last of him. Dr. Deaton went to see Valack looking for answers about the loss of Derek's werewolf powers and to find out more about Kate Argent, aka la loba: The Bone Woman. Finding answers required Deaton to stare into the creepy third eye inside Valack's head and go into a short coma, only to be woken up by Lydia. Deaton knew the pack had to travel to Mexico to find Kate, but couldn't get them there in time to save Scott from his berserker fate.

So aside from hopefully getting a cure for berserker-dom and reinstating Derek's powers, there's also the question of what Scott will do to his pack. Obviously he would never want to harm them on purpose, but as a berserker under Kate's control? He could be the most dangerous weapon of all. What if his werewolf powers stay intact while he is a berserker? That would be the worst news as Scott is not only an alpha, but he has also been letting the wolf side get the best of him lately. In fact, there were times he reminded me of the alpha monster Deucalion became in Season 3 when he transformed.

So what will happen to his pack? My biggest worry is that Scott will kill Derek while in berserker form or possibly even Kira, though having yet another one of Scott's love interests die would not at all be pleasant to witness. But with Derek's lack of powers and this whole season and this promo suggesting his death, maybe the Teen Wolf writers aren't just messing with us and will actually go through with the death we've all been dreading?

And what about the newer wolf pack members? In an interview with Bustle, Dylan Sprayberry discusses his character Liam's fear of the berserker and how his alpha — the one person who is supposed to mentor and be there for Liam — is now the one thing he fears the most.

"Although Liam has been having some trouble trusting everyone, he's always looked up to Scott because he's the only one he feels like he could get advice from because he's a werewolf," Sprayberry says. "If he loses that, I mean, who else is he going to talk to? [Scott] has become a big role model in his life."

Sprayberry also says that Liam seeing his role model become the monster that is causing his nightmares has a huge impact on him and the team in the Season 4 finale. A finale that Sprayberry promises will surprise people. "There's going to be a big twist at the end," Sprayberry teases. "There'll definitely be mixed emotions." At this point, I can't even imagine what that means.