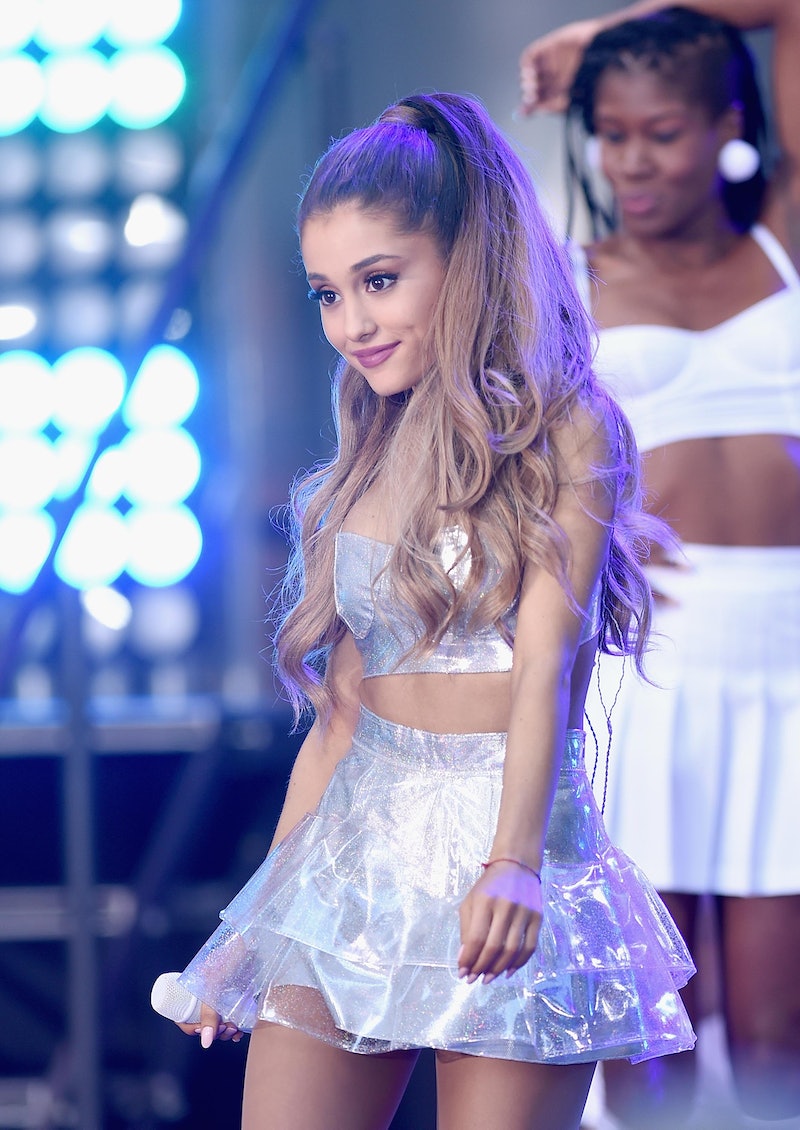 Ariana Grande is sashaying her way up the pop music ladder, on her way to divadom, with a Mariah Carey-sized voice. She's earning her pop princess status, as she has two No. 1 albums to her credit already. There's no doubt Grande and her half-up, half-down ponytail are rising stars, and with increased fame comes loads of stories, gossip, and rumors about Grande's diva-like behavior. An Aussie news outlet reported that Ariana Grande has photo shoot rules that are seriously specific, even abruptly canceling some when her requests weren't met. Were Grande's demands really that diva-like? Was she requesting something totally out of the ordinary? Were her specifics that abnormal?

I think not. Word is she canceled the Aussie appearance, but not before issuing rules. The reporters were banned from asking about her relationships; about Mimi; about her former Sam & Cat co-star Jennette McCurdy, with whom she's believed to be feuding with; about Justin Bieber collabos; and about her grandfather's death, which are all topics the media and her beloved Arianators care about to the extreme.

Grande, who is just 21, has become a master of media sidestepping. She has segued away from discussing her love live and her reported romance with Big Sean. She kept details of her split with Nathan Sykes of The Wanted under wraps for quite a bit, since they were the cutest couple, like, ever. She also split with on-off Janoskians BF Jai Brooks as quickly as she reunited with him, but kept all the details on the DL.

But lately, rumors of her Beyonce-like behavior have been surfacing. A story a Grande meet-and-greet being an epic fail also landed on the Interwebs, which was surprising, given the Twitter love with which she showers her Arianators.

The other requests included telling photographers not to shoot her in natural light and to only shoot the left side of her face. A little more diva-y, but it's not like she requested to be hand-fed grapes and champagne all day.

Those are actually pretty common celeb requests. Natural light can be extremely harsh, but so can artificial lighting, so it can boil down to personal preference. And, hey, even us average Janes prefer to be shot from our "best side." When you're rich and famous, one false move can lead to a crappy photo that's then splashed all over a tabloid and spun any which way but accurately. How many times have you seen a celeb making a crazy face in a paparazzi or a candid snap and it ends up being used to suggest plastic surgery, personal problems, and more?

That said, the Aussie outlet said that Grande looked at each photo after it was taken and requested that the ones she didn't like be deleted. Again, that's not a big deal. Who hasn't re-taken 10 Instagram photos before posting the one you like best?

Grande reportedly left to change her outfit, since she didn't like how her top photographed while posing. Once again, when you are uncomfortable in what you are wearing or how your hair is styled or how much light is reflecting off your skin or hair, it shows. If she didn't like how her top looked in photos, her discomfort would continue to manifest itself as the shoot went on.

So before the media starts calling out Grande as a mega diva, these supposed photo shoot specifics are pretty simple and fair. Pop stars often have Declaration of Independence-sized lists of demands. Grande is nowhere near that.

At the end of the day, the singer and actress is unfairly gorgeous, so it may seem vain for her to be so concerned about her photo shoot specs, but I get it, Grande. We all want to look our best.

More like this
Ariana Grande Just Wore The Chunkiest Knit Sweater I've Ever Seen
By Dominique Norman
Jennifer Coolidge Slid Into Ariana Grande’s DMs In The Most Iconic Way
By El Hunt
Phoebe Dynevor Serves ‘Bridgerton’ Underboob In Stunning Floral Gown
By El Hunt
Ariana Grande & Kristin Chenoweth Sing A Wizard Of Oz Classic On TikTok
By Alyssa Lapid
Get Even More From Bustle — Sign Up For The Newsletter
From hair trends to relationship advice, our daily newsletter has everything you need to sound like a person who’s on TikTok, even if you aren’t.