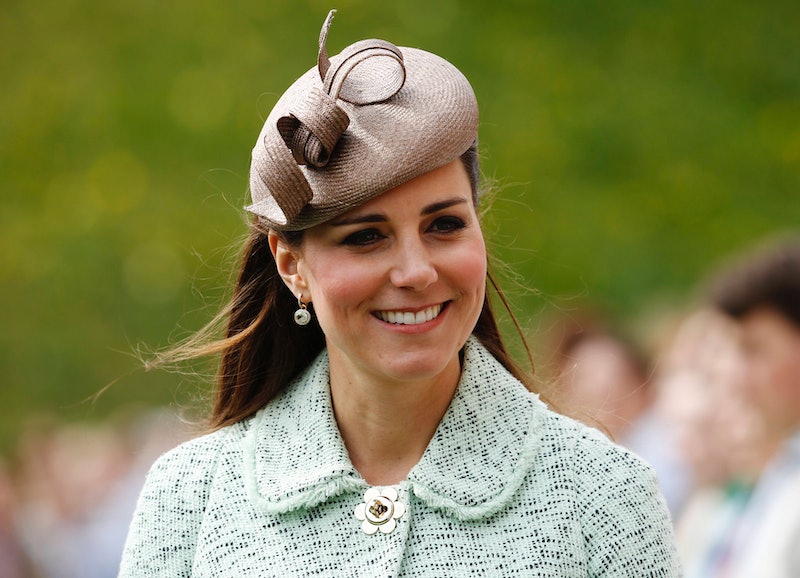 The exciting news of the day is that Prince William and Kate Middleton are expecting another baby. Not much is known about when the Duchess of Cambridge will deliver the royal baby or what the sex is yet (so instead our imaginations are just running wild) but we do know a little bit of what to expect since they've been down this road before.

Prince George was born just a little over a year ago and I can still fondly remember how all the news stations were on Royal Baby Watch from the moment the news was announced right up until Kate and Will introduced George to the world. Media literally camped out in front of the hospital for weeks leading up to her labor in order to bring us news of absolutely every minute detail of the Royal Baby's birth.

True, there is already a baby Cambridge, but that doesn't mean that George's sibling will garner any less attention. The world continues to be fascinated with everything Kate Middleton from her enviable facial features to which outfit she chooses to wear to an event. She's a regular tabloid cover star and paparazzi follow her every move. So what can we expect in the nine months leading up 'til baby number two? Probably something along these lines.

Kate Middleton's fashion already has a worldwide interest and we know from her time carrying George that she was just as stylish pregnant as she was normally. I'm excited to see the kinds of outfits she'll choose in the coming months as the baby grows.

The Duchess of Cambridge already has luscious locks, but thanks to the hormones your body produces during pregnancy, her hair is about to get even thicker and shinier. It's just not fair.

I can't even wear these towering shoes now, so there's no way I'd want to wear them with swollen feet.

Prince George got everything from a Shh! Don't Wake the Royal Baby children's book to an incredibly creepy doll-version of himself. There's no better time to capitalize on capitalism than to sell some Royal Baby themed products. It doesn't even have to be particularly regal. When Prince George was due, Amazon had a whole “Perfect Gifts for a Royal Baby” section which was basically just regular stuff you'd get a baby but with the word "Royal" slapped on there.

I love the sound of pregnancy announcements and dollar bills in the morning.

We now have nine months to speculate whether Will and Kate will have a boy or a girl. But don't just play the game the old fashioned way. Take bets on the outcome and try to win some money on your guess. Or maybe Krispy Kreme will bring back the “Bite & Reveal” doughnut which was plain on the outside but featured pink or blue creme on the inside.

What a world we live in.

Though sources have speculated that Alexandra could be an option for a girl, you know Diana is going to get tossed around in tabloids. Here's hoping they go, like, way outside the box and name the baby like Daenerys or Peeta or something.

Within a month of Kate and Will's announcement of being pregnant the first time, Kim Kardashian and Kanye West made their own baby announcement. Will the stars aline for both tabloid royalty to be pregnant at the same time again? One can only hope, because Kim and Kanye better get going if they want enough children to name after all the compass directions.

It's been about seven hours since the announcement and people are already waiting outside Kensington Palace. There's nothing like news of a Royal Baby to make people lose their minds and camp out in front of buildings for weeks.

If their second child is half as cute as Prince George, we're all in trouble because that will be one photogenic family.

Get ready for magazines to cover every step of the pregnancy. Expected headlines will be along the lines of "Royal Rumble: Kate Wants a Yellow Nursery but the Queen Demands Red!" and "Kate Middleton in Tears after Prince William Misses First Sonogram. Is the Prince Cheating on His Princess?"

This is going to be so much fun.