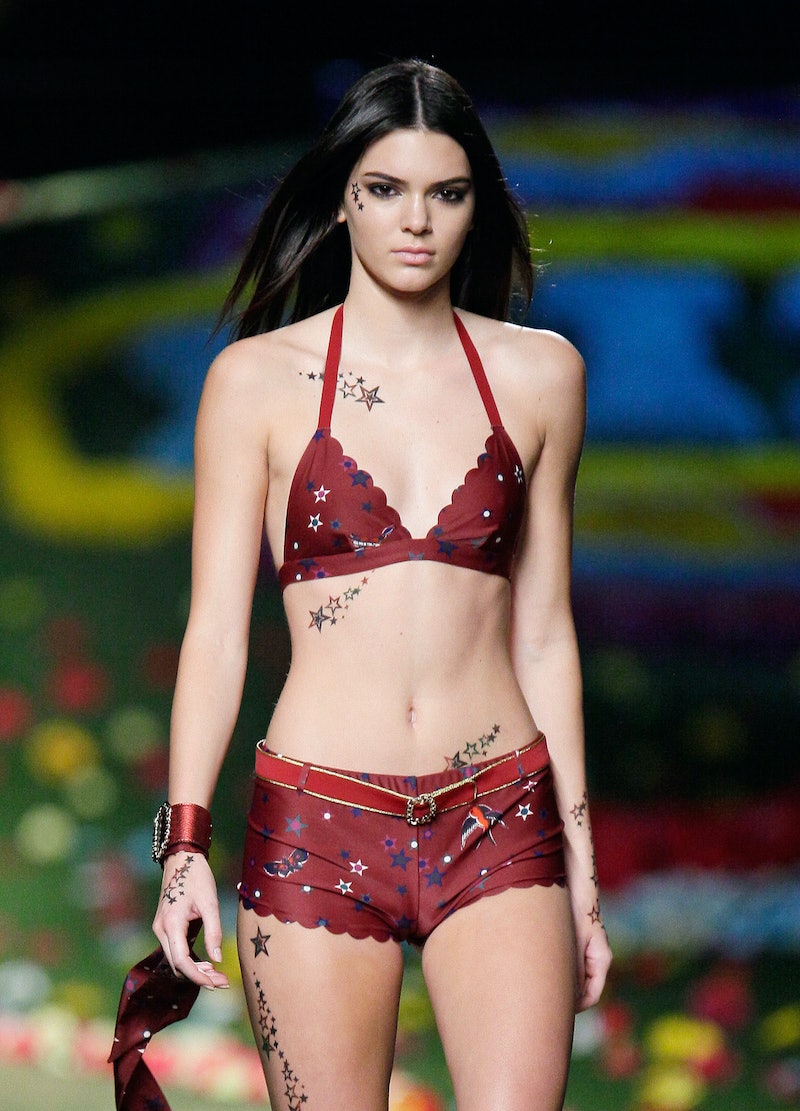 Kendall Jenner (or, as we’re supposed to call her, just Kendall) has made quite a splash in the modeling world. The second-to-youngest sis in the Kardashian clan rocked the Marc Jacobs runway last season for the Fall/Winter show. And she’s back at it again, folks. On Monday, Kendall walked the Tommy Hilfiger runway, rocking a red set of lingerie and a sheer blue coverup.

But wait! After taking a closer, it looks like she was wearing something else. Kendall had quite a few temporary star tattoos all over her body, including her neck, stomach, and legs. Are they real? No, of course not — the other Tommy Hilfiger models were seen wearing them as well.

So, what's with temporary tattoos? What were once a way to show that we were badasses as kids are making a comeback in the fashion world. Flash Tattoos — you know, that temporary metallic ink celebrities like Alessandra Ambrosio are really into right now— have been spotted all over Pinterest and Instagram. But what about other faux ink?

Turns out, quite a few celebrities have been sporting temporary tattoos as of recently. And hey, why not? They're the perfect option for anyone who's too afraid to face the needle. Here are five stars who have been spotted with fake ink, to get you inspired to try it out yourself.

Oh, Kesha. The pop diva is basically the queen of temporary tattoos. She's got that glitter on her eyes and isn't afraid to mix and match her temps with her outfit. Dare we say that she made the trend cool in 2010?

Who knew that temporary tattoos could also be functional? Lauren Conrad and her bridesmaids stuck these on their wrists before hitting the town during her bachelorette party. Safety first.

The only inkless member of One Direction posted this photo on Instagram. Turns out, they're just temporary tattoos from a fan. Sneaky, sneaky.

Queen Bey was recently spotted with a few Flash Tattoos while on vacation in Italy. If Beyonce is into temporary tattoos, then we should probably all be wearing them ASAP.

The youngest Kardashian tricked us all by posting a photo on Instagram of what appears to be a tattoo of a gun on her chest. Turns out, it was just a fake. Must be a sister thing.