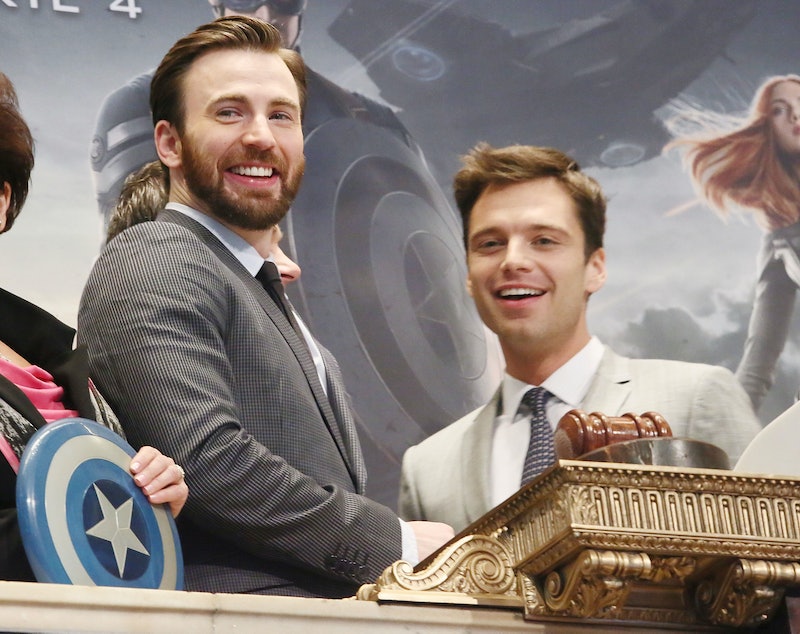 Earlier today, we reported that the likelihood of another Iron Man film happening was slim — Tony Stark put in his time and a fourth solo film just ain't gonna happen. But that doesn't mean Marvel is hanging up the capes of all of our favorite superheroes. Chis Evans, the corn-fed hunk who portrays Steve Rodgers in The Avengers and Captain America franchises, confirmed he's still got some work to do in the blue tights before it's all said and done. In an interview with MTV, Evans reassured fangirls everywhere that it'll be awhile before Bucky — or anyone — takes over America's hero.

“Who’s handing off the shield? Don’t take my job from me prematurely, dude. I got a few more movies that I have to finish first, which I’m happy to do. I’m sure it’ll happen at some point, all good things have to come to an end. But I’m really happy playing the character.”

While it's not entirely surprising that Marvel has roped in Evans, one of their most lucrative assets, with a lengthy contract, the comic conglomerate should know by now that thinking outside their mainstay of heroes brings in major cash. Guardians of the Galaxy is the highest grossing film of the YEAR, and now Parks and Rec's Chris Pratt is known more as classic-rock-hits-bumpin' Star-Lord than the bumbling Andy Dwyer.

When asked if Cap's staying power was due to the fact that Mr. America would be leading an all new team of Avengers in the future, he just laughed. "Yeah, that’d be great. What can I say? Marvel doesn’t disappoint. You want to kinda say, whatever you’re hoping for, you’re probably gonna get.”

Avengers: Age of Ultron will hit theatres in May of 2015, and Captain America 3 is slated to follow with a May 2016 release. And now we wait.