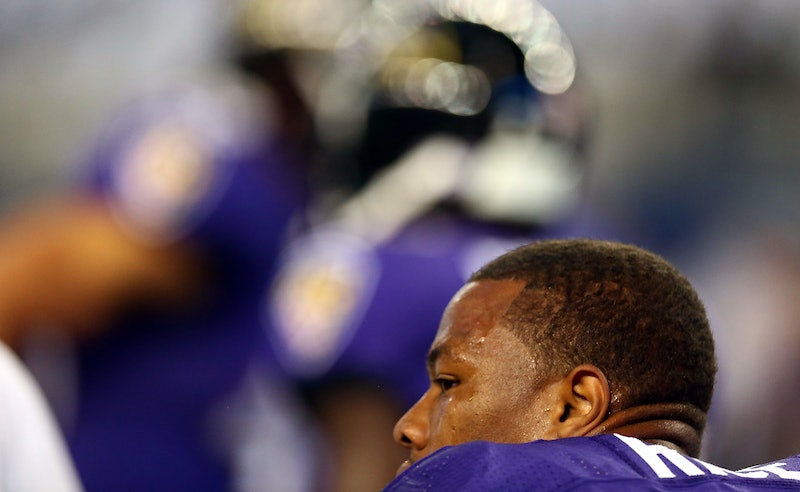 It's beyond bleak that I could start this post "Another day, another domestic abuse story," but unfortunately, here we are. The video from Ray Rice's horrific assault on his then-fiancee Janay Rice surfaced today, and I recommend not watching it (he punches her and then drags her unconscious body from an elevator). Cue: victim-blaming from Fox News and horrible trending hashtags that completely misunderstand and downplay the effects of domestic assault. I will be the first to admit I don't know anything about football, and Seth Rogen is, apparently, right there with me—and yet, he still called attention to the situation by tweeting early on Monday morning: "I don't know much about football, but I know that Ray Rice is a piece of garbage who shouldn't be allowed to play it professionally anymore." Damn. Right.

And there should be more celebrity response to the incident, frankly. The lines between Hollywood celebrity and sports celebrity have definitely been blurred, and the scope of fame is fluid throughout both communities. So it's surprising to see that besides Rogen, there are only a handful of responses (so far) to the incident, coming from Mia Farrow, Patton Oswalt, and Jamie Lee Curtis, so far.

Of course, as the news cycle cycles on today, I'm sure other celebrities will respond, hopefully taking a stand against domestic abuse. When they have Twitter at their disposal, it's so easy to compose (or have someone else compose!) a tiny tidbit that shows their solidarity. It's so easy, famous people! And it helps victims see that they aren't alone and have support! If y'all celebs want to be candidly fabulous at football and basketball games, you've gotta play the flip and hold athletes accountable, too.