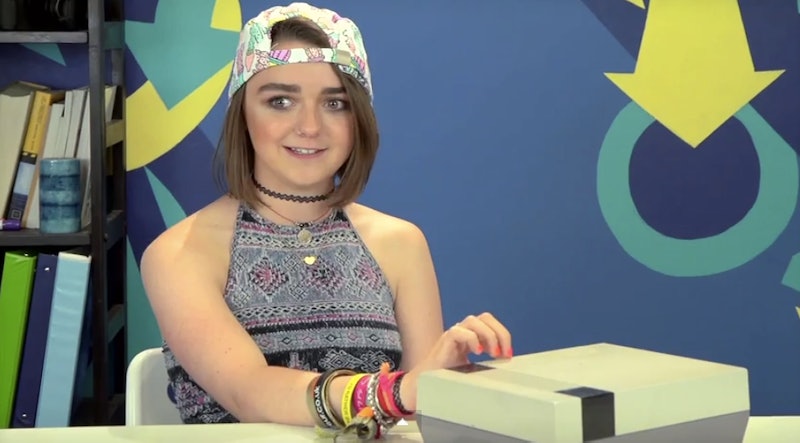 In case you live under the proverbial rock of the Internet, there's a little series called Teens React which features a bevy of today's teens bewildered and gobsmacked by the culture and technology of yesteryear... or rather, the '90s. The latest installement, "Teens React to Nintendo" features Game of Thrones star Maisie Williams. Though she is decked out in the Saved by the Bell look from head to toe, sadly, this gray console is utterly foreign. Her reaction, as well as those of her fellow "hip kids," will make you cringe, cry, laugh, or all three at once.

When first handed the ancient Nintendo, the teens ask if it's a projector, a video player, and most tragically of all... a GameBoy. The device that brought you hours of pixelated entertainment with Mario & Luigi, taught you how to fend for yourself in the wilderness with Duck Hunt, and demonstrated the value of hard work and skill in Paper Boy is now nothing more than a relic of technology's past. A RELIC, I SAY!

The clip might make you want to curl up into a ball and shudder at how long it's been since you owned an NES. Hopefully the nostalgia of watching these young whippsersnappers interact with the ultimate container of joy from your childhood will be more whimsical than crippling. To help you cope with just how long it's been since Zelda first made his way into your life, I'm mashing up NES with Game of Thrones. Who would win in a fight between Arya Stark and these classic NES heroes? Let's find out. Select Start!

Even though Mario & Luigi have power in numbers, they have nothing on Arya in terms of self-defense. Without their magic mushrooms, they have little but the power of jumping and plumbing to save them. They are no match for Arya's swordsmanship. Also, leaving The Hound for dead is way more badass than defeating Bowser.

Arya Vs. The Belmonts from 'Castlevania'

This is a tough one. The Belmonts fought off vampires, skeletons, and hundreds of baddies that go bump in the night. They also wield loads of medieval weapons. Sorry Arya, but the Belmonts take it.

Take all your fancy kicks and go home. Arya would pulverize both of your lanky bums!

Kirby, do yourself a favor and just take a huge gulp of air and float away as fast as you can. Arya FTW.

Arya Vs. The Dog from 'Duck Hunt'

As much as it pains me to say it, the dog would totally win. No matter how accurately Arya could use her sword or shoot a bow, the dog would taunt her mercilessly and drive her to madness!

I'm fairly certain Arya would have no qualms with setting the whole contraption on fire. Though she be but little, she is fierce!

Finally! A fair match with the same skills and nearly the same world. Arya is a lone ranger and dark hero whereas Link is the classic do-gooder. Both depend on the strength of their skill and intellect to "win the game." They face mysticism, foes, and medieval badassery. I call this one a draw.

Now for that Game of Thrones and Legend of Zelda crossover...