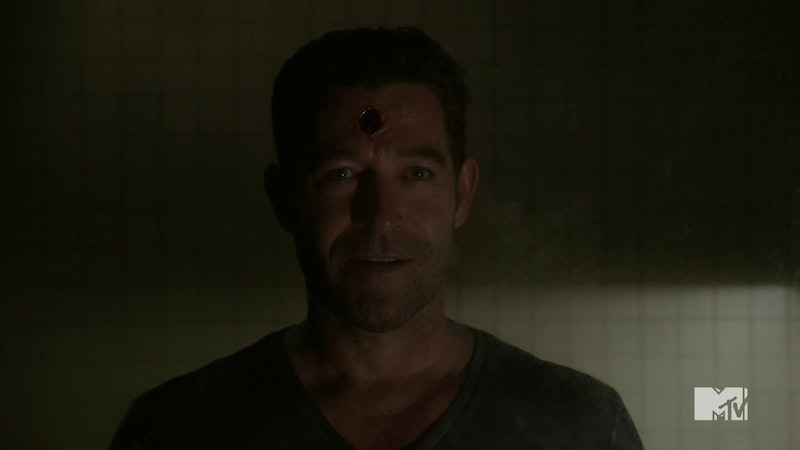 Last week's penultimate episode of Teen Wolf's fourth season included the introduction of an interesting new character: A man named Doctor Valack, who had a hole in his head and who knew a little too much a little too soon. On Monday night, Teen Wolf's Season 4 finale brought with it plenty of revelations and life changes for our cast — including the confirmation that, yeah, that's not the last we're gonna be seeing of the doc with the (*ahem*) tunnel vision. In fact, he'll be in very close quarters with one Teen Wolf baddie, Peter Hale. So what will these two be getting up to come Season 5?

As with any Teen Wolf hiatus, a lot is up in the air as we exit one season and prepare to head into another. This is, after all, a show with a noted habit of juggling its cast season-to-season, shedding some to other shows or other life choices and gaining new ones all the while. But if we do get Peter and Dr. Valack (played by Steven Brand) back for some more creepy funtime — and it does seem like that's the plan — what will it entail?

Well for one, it'll depend on how cozy Valack and Peter get over the hiatus. Peter didn't seem, uh, enthused at the prospect of being locked up with a dude who's got a tunnel to a third eye and who knows things before people say them. Then again, that third eye and its ability to see things others can't may come in handy should Peter be looking for any number of things: A way out, a path to revenge, you name it. This could be a friendship made in asylum, and aren't those the most legendary friendships of them all?

Yep, Peter Hale is alive and well — or, well, at least alive — exiting Season 4. Teen Wolf's really keeping with its tradition of never killing white male villains, isn't it? I wonder what Deucalion's up to these days.