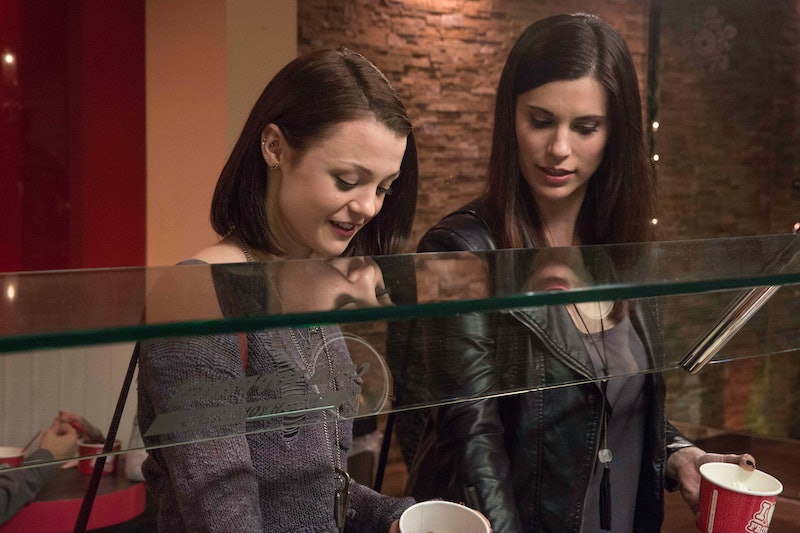 What started out as another MTV teen drama has officially turned into an emotional roller coaster. I am now officially way more invested in Finding Carter than I ever intended to be and after last week's cliffhanger, I've barely been able to contain my curiosity about Max's fate. Will he live? Will he die? Would MTV actually subject us to something so cruel as taking away one of the best characters on the show? The closer we get to Sept. 16's season finale, the more things start to heat up — and the more I'm convinced that absolutely everyone Carter's ever met is involved in her kidnapping. Yeah, that's probably not the case, but I would sleep with one eye open if I were Carter.

And while Max's life hangs in the balance, someone on the show is getting ready to make a departure. As Tuesday's episode title, "The Long Goodbye," suggests, we're probably bidding someone important farewell — but who? The way I see it, there are four possible options for how things could play out, but I can almost guarantee that whatever goodbye we end up saying won't be forever. After all, in Carter's world, is it ever?

Max would, at first glance, seem the most likely candidate — but like I said earlier, would MTV actually do this to us? I'll admit that things aren't looking good (he was shot, you know), but I can't see death as a viable plot point right now. Of course, I could be in denial, but I think he's safe for now. Aside from the whole hospital thing, anyway.

Has this girl ever been a stable fixture, even as the title character? After her smackdown with Taylor in last week's episode when her twin sister finally told her everything I wish I could say, it wouldn't be surprising if Carter took a turn for the melodramatic and decided that her family's life is better without her and split. She wouldn't be totally wrong — she has managed to complicate just about everybody's life since she returned — but the worst thing she could do to her family (especially Elizabeth) would be to disappear all over again.

And honestly, if I was her mother, I would have grounded her by now. Of course, not that Carter would've listened to me. Ugh.

This could just be wishful thinking, but I can totally see Crash and Carter having a clandestine meeting where he tells her he's leaving for good. Their "love story" has never seemed to have any lasting potential, and now that he's shot the most lovable person in Carter's universe? Yeah, he'd better make an exit, or he's going to be in for a lot more than jail time. Or maybe his exit will be jail? Good. Let him stay in there. I'd like to throw him at the Orange is The New Black cast and see how he ends up. Crazy Eyes would have none of this.

Carter might finally get the opportunity to say goodbye to her pseudo-mom in person to get the closure she needs to start acting like a decent individual and being a real part of her new family. Or maybe Lori and David will reveal that they're actually having an affair, and David will break things off with her. That would be mind blowing, wouldn't it? Let's not expect that to actually come to fruition just yet.

And we all know that if Lori leaves, she'll be back. And I kind of like it that way. She is totally crazy and I can't wait to see what she has in store for us next.