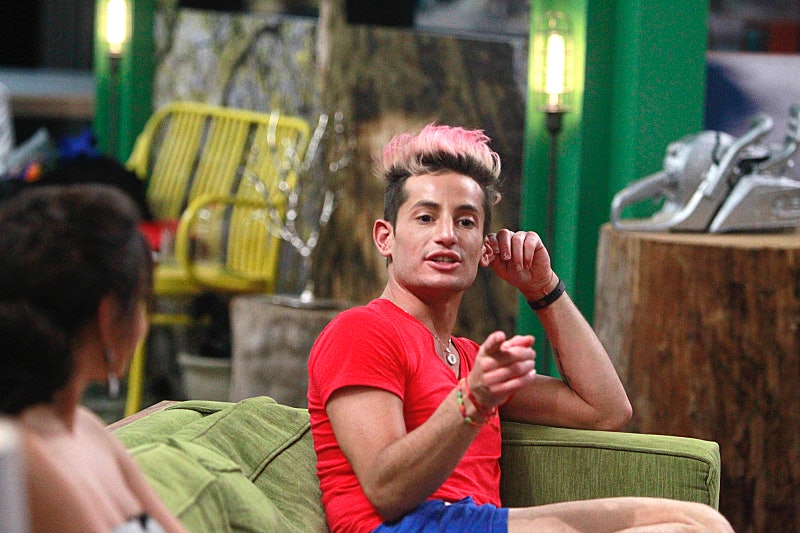 By this point, everyone knows where they stand on Big Brother 's Frankie Grande. The current houseguests want to get him out and are probably repeatedly kicking themselves in the head for not doing it when they had the chance. Frankie has also probably lost the "America's Favorite Player" vote awarded on finale night for his egotistical behavior, backstabbing, and controversial comments. But what do former Big Brother houseguests think of him?

Although fans probably have a solid understanding of the game, you don't know exactly what it's like until you've been on Big Brother. The way Frankie has acted on the show is partly due to his personality, partly because he's on TV, and partly because he's playing the game. Knowing all of that, I still can't help but dislike the guy. Is there something I'm missing that past contestants' insights could help me understand?

Maybe Season 10 winner Dan Gheesling's return to Big Brother during Wednesday night's live eviction show will shed some light on Frankie's gameplay this summer. From Dan's tweets, he doesn't seem to think many of Frankie's moves are the best, but he recognizes that Frankie's prowess at winning competitions will obviously make him difficult to get out of this game. Let's hope he can elaborate on his Frankie feelings Wednesday night.

Big Brother 15's McCrae Olson tweeted that he doesn't like Frankie, although he doesn't understand why people are saying he made a rape joke.

The Twitter user McCrae was communicating with responded with a link to this article for reference, which I wrote last week, to which McCrae replied, "stupid article." But that's OK. I was glad he didn't win last season, anyway, and the fact that he doesn't seem to see anything wrong with Frankie's comments about rape is a huge problem.

McCrae's showmance partner, Amanda Zuckerman from Big Brother 15, doesn't seem to think Frankie is all that bad. Although, this could be because aside from Aaryn, she was probably the villain of last season.

Big Brother 13 winner Rachel Reilly has been surprisingly not-so-talkative about this season's contestants on Twitter. However, she did tell Julie Chen that she loves Zankie when she sat down with the Big Brother host during one episode this season. “I don’t know what’s going on with them, but I hope that they’re friends forever, because they’re adorable,” Rachel said.

Last season's winner Andy Herren isn't afraid to throw some shade at the houseguests, or anyone or anything in his line of fire for that matter, on his Twitter account. This includes Frankie, who Andy thinks should just stop talking.

Big Brother 12's Matt Hoffman finds Frankie's self-proclaimed status as a "social media mogul" just as ridiculous as the rest of us. Can you tell he's probably not a fan of Frankie's either?

And one of Britney Haynes' few tweets about Big Brother 16 brings us back to the good old days early on in the season, when we loved Frankie (and even Christine) upon first meeting them. Oh, things were so simple back then.

So there you have it. For the most part, former Big Brother contestants loathe Frankie as much as the rest of us do. Good job, team.