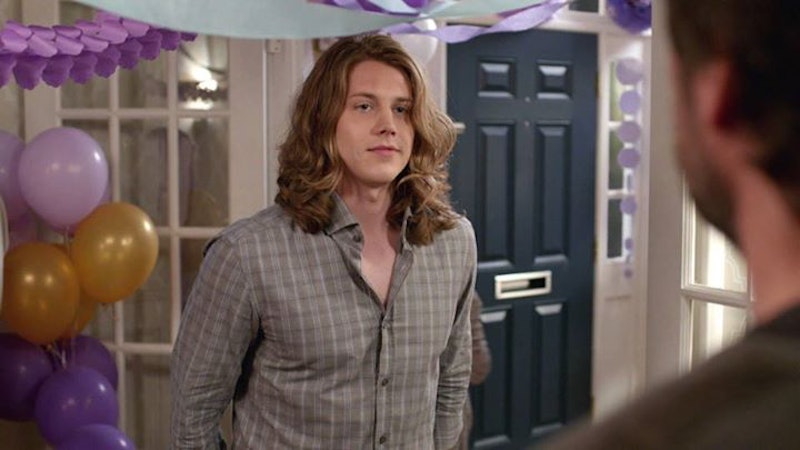 THERE IS A GOD, PEOPLE — or, at the very least, MTV cares about my personal well-being so much that they won't kill my favorite characters off of my new favorite series. It's been a traumatizing week for Finding Carter fans as we waited to find out Max's fate and, thankfully, we didn't have to wait for the Season 1 finale to find out. Last Tuesday, Carter's boyfriend and all-around psycho Crash shot Max on Finding Carter and in Tuesday's new episode, "The Long Goodbye," MAX WOKE UP. That's right, Maxlor fans and human beings of planet earth, Alex Saxon — aka that adorable guy that makes croutons, loves house plants, and has amazing hair — hasn't been killed off Finding Carter and we can all rest easily tonight.

Tuesday night's episode of Finding Carter was by no means an easy one nor was it guaranteed that Max would survive — he flat-lined and was unresponsive for most of the hour, forcing me to break down into sobs multiple times. And, to make matters significantly worse, Taylor and Carter spent that entire time competing over who was closer to Max — his BFF or his girlfriend. So not the time and place for that nonsense, also so not the time and place for Taylor to meet Max's mom for the first time. Yep, that's right, we finally met one of Max's absentee parents, his mom Karen, and she basically ignored Taylor's existence because, well, she didn't know her. And Taylor took that so personally.

It was a total heartbreaking mess that was only made more heartbreaking by how hard Max's coma hit Grant. That kid really just can't catch a break and it's really hurting my soul every damn week.

But, thankfully, everyone's going to get plenty of time with Max and, hopefully, many of his amazing croutons. How do I know that? BECAUSE MAX WOKE UP.

In the final moments of Tuesday night's episode, immediately following a sisterly moment between Carter and Taylor that essentially had Carter trust Max's well-being with her sister, Max's eyes fluttered open. Honestly, I don't think I've felt so relieved in my entire life — Finding Carter fans need Max and now we get to have him.