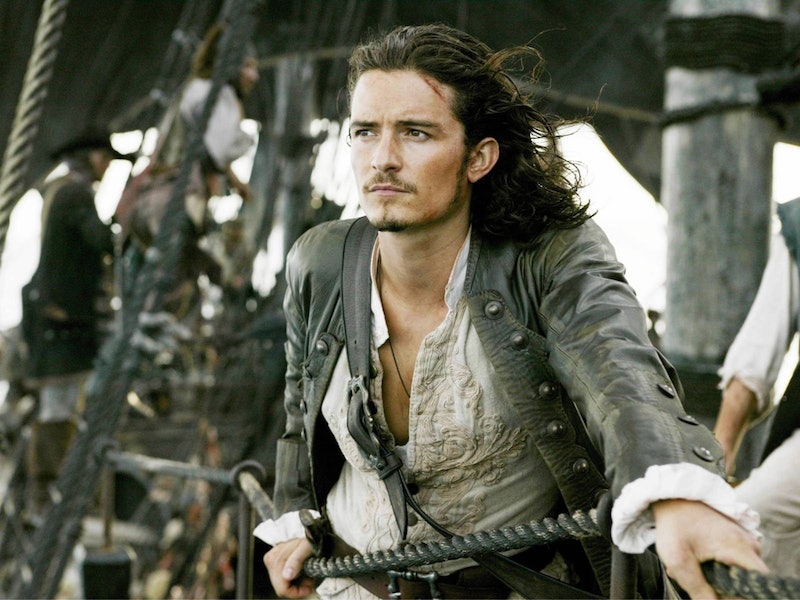 In today's sequel news, Orlando Bloom is in talks to join Pirates of the Caribbean 5. Apparently, when Bloom heard Johnny Depp had already signed on, that's what sealed the deal for him to think about rejoining. "One of the reasons I jumped at the opportunity was because Johnny was involved," Bloom revealed at Oz Comic-Con in Brisbane. "I was such a massive fan of Johnny Depp growing up so to get up close and personal to Johnny and see how he worked as an actor was just a massive gift."

Bloom played blacksmith and pirate William Turner in the first three films before opting out of Pirates of the Caribbean 4: On Stranger Tides. But it seems he's not quite done with his days of playing the charming, long-haired pirate, because he's possibly coming back for more.

Anytime an actor signs on for a sequel or turns it down, it's a big deal. Often when the original cast refuses to return, the movie is usually a disaster like Grease 2, which is basically unwatchable. On the other hand when the stars return, it can signal success for the film. 22 Jump Street made even more money than its previous film and scored an 84 percent on Rotten Tomatoes, which is a pretty big deal for a sequel. (Good thing 23 Jump Street is happening.)

So will Bloom's return to Pirates 5 signal a similar renaissance? While it was nice to have Depp for all the films, Bloom's overly-romantic, nice-guy pirate was a big part of the cast — the fourth film definitely missed him. There's a lot to think about when jumping back into a franchise, though, so here are some things for Bloom — and fans — to consider.

With a big name like that slapped on the poster, it will draw fans' attention and Bloom is a pretty seasoned actor. The sequel could use his skill set to improve the film's chances of being decent.

CON: HOW ARE THEY GOING TO BRING HIM BACK?

The last we saw Will Turner he was taking over The Flying Dutchman as the new Davy Jones. His new agenda made it convenient for the fourth film to leave him out, so how will the fifth film bring him back in a believable manner? I just don't want another "Jack Sparrow got swallowed by the Kraken but somehow survived in this upside-down wasteland" scenario.

Jack Sparrow is nothing without his wit and ability to make fun of people. Things just weren't the same when his preferred target wasn't around.

CON: IT WILL JUST REMIND ME THAT TOM HIDDLESTON ALMOST GOT THE PART, BUT DIDN'T

That's right, our lovable Hiddles was almost Will Turner. I love Orlando Bloom, but I can't deny that seeing Hiddleston in this part would have probably been better. Bloom reprising his role will just remind me that we missed out on something that could have been great.

I do love this man.

Of why he's considering returning, Bloom said, "That whole experience working with Johnny and (director) Gore (Verbinski) was really amazing for me." It's true that Depp might be back, but Gore Verbinski is not returning, so he might not love doing the fifth movie as much as he might think.

PRO: IT'S FUN TO SEE A CONSCIONABLE PIRATE

Unlike most ruffians who sail at sea, William Turner was a stand-up guy. His moral compass conflicting with his pirate duties was always a fun plot point.

CON: IT WOULD BE WEIRD TO HAVE BLOOM, BUT NOT KNIGHTLEY

It's not really the same without the original trio of actors. Who even is Will Turner without Elizabeth Swann? I'm not sure I want to find out.

PRO: MAYBE HE CAN GET HER TO JOIN, TOO

CON: IT'S NOT EXACTLY AN OSCAR WINNER

I mean, Pirates 5 isn't exactly going to get critical acclaim or win Bloom any awards. But at the same time, who cares? It's probably still going to make a lot of money and entertain fans anyway — and that's all that really matters.

PRO: IT WOULD GIVE THE SERIES A GOOD SEND OFF

This could be the last Pirates movie, and what better way to say goodbye than with a reappearance of the original pirate duo? Without William Turner the movie wouldn't seem the same and it deserves a proper farewell with its cast intact.