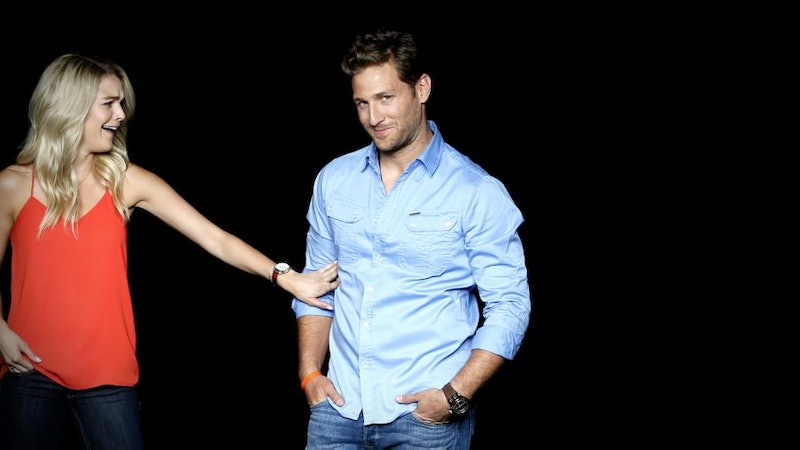 The most-hated Bachelor ever is back on reality TV. That's right, Juan Pablo Galavis has joined Couples Therapy with girlfriend Nikki Ferrell and it's going to get real. On Twitter JP says that doing the show was "one of the BEST and most GRATIFYING experiences" so maybe things get better as the season wears on. He better hope so because it's not looking so pretty based on the first episode.

It's been six months since the finale of The Bachelor aired in which Juan Pablo told Nikki he liked her...a lot, but that he wasn't going to propose. But even in that time, it doesn't seem like Juan Pablo has changed much. Against all odds he and Nikki are still together, but it's clear just from their first session on the show that they have a lot of issues to work through. Poor Nikki tearfully told Dr. Jenn that she feels like she's still waiting for Juan Pablo to pick her and that she wants to feel like he's committed to her. From what we've seen so far, JP doesn't really take issue with much, which is one of the problems Nikki has: nothing is a big deal to him.

But though Juan Pablo may be acting like everything is fine and nothing phases him, it's clear that he ees not OK, and here are 8 reasons why.

HE STILL HASN'T SAID I LOVE YOU

JP blames it on his culture (ah, the quintessential Juan Pablo excuse) saying that in Venezeula you don't drop that phrase willy-nilly. I mean, I think it means the same thing in every culture but the larger problem is that JP also admitted he doesn't know if he will ever say those words. I get that maybe after the finale it was too soon, but they've been together for like almost a year. If he can't see himself saying it soon, Nikki might want to get out because she might never hear what she wants to hear.

He may have brushed off ABC and The Bachelor like they didn't matter, but he loved talking up his exploits while in the Couples Therapy house. "It was a good experience meeting 27 women," he said of the best part of the show. Um, dude, you probably should have said it was good because you met Nikki.

Later a fellow contestant asked him what was the deal with the back-to-back fantasy suite dates, like did he have sex with all three? "That's the beauty of that," JP answered with a glint in his eye. "No one really knows what happened." Actually we do because both Andi and Clare admitted to having slept with you, but alright. Glad you think a back-to-back sexual encounter is the beauty of the show.

HE BASHES NIKKI ON THE REGULAR

While Nikki explained to the cameras that she is looking for the chance to take the next step with Juan Pablo, he joked around that he still questions her pretty often. "Everything she does that I don't like, I'm like, 'is this going to work?'" I don't think he knows that part of loving someone is loving all of them, flaws included.

Later Nikki pointed out their living arrangements on the show saying, "You're going to have to live with me." Juan Pablo laughed and just said, "We'll see how that goes." WHY SO JERKY, JP?

But the Pièce de résistance of rudeness came when he announced to the house that he feels like he has two daughters, because apparently Nikki acts like she's 15. "I feel like a dad to her," he said in what may be the creepiest JP moment ever. He was trying to say he felt that way because he has to chide Nikki to get ready and what not, but Nikki was not amused by this comment. Naturally, Juan Pablo thought it was a riot. Ugh.

HE'S PROUD OF BEING A VILLAIN

Big Brother's villain Evel Dick is also on Couples Therapy and apparently Juan Pablo beat him out in a most hated reality TV villain poll. Juan Pablo's response to that? "Yeah, I'm the man of that." Someone please explain to me why he's proud of being a renowned douche. Oh yeah, that's right. It's because he's a douche.

HE DOESN'T SEE A FUTURE WITH NIKKI

Juan Pablo straight up said, "I don't think about that," when asked what future he pictures with Nikki. Sorry hon, but I don't think a ring is coming your way any time soon.

HE HAS A PROBLEMATIC DEFINITION OF LOVE

Apparently to JP, love means you can't live without the other person. "If she leaves me I'll be sad, but I don't know if I'll die," he joked in his therapy session.

Love aside, I think what Nikki is most looking for is reassurance that Juan Pablo is in it for the long haul. Unfortunately he doesn't seem eager to give her that. When Nikki explained that she feels like Juan Pablo doesn't care as much about her as she does for him, he said, "Yes, she feels that way." I wanted to reach through my TV and shake him and tell him that it was his chance to reassure her that he does care about her. But this is Juan Pablo, so of course he didn't do that.

HE STILL DOESN'T KNOW WHAT HE DID WRONG

When the rest of the contestants asked Juan Pablo why America hated him, he responded that it was because he didn't propose. Actually, America hates him because he slut-shames women and has made disgusting homophobic comments. We stopped liking him long before he didn't take a ring out, but he is never going to get that.

Maybe he'll get better as the season progresses but as it stands now, Juan Pablo is the same old jerk he always was. Only this time he can't blame The Bachelor production and editing team for casting him that way because it seems this is just who he is.

More like this
Kourtney & Travis Crashed His Daughter’s TikTok Live In Their 2nd Wedding Outfits
By Grace Wehniainen
When Was 'Bling Empire' Season 2 Filmed?
By Alyssa Lapid
There's Plenty Of Drama Brewing To Warrant A 'Summer House' Season 7
By Brad Witter
Everything To Know About 'RHONJ' Season 13
By Brad Witter
Get Even More From Bustle — Sign Up For The Newsletter