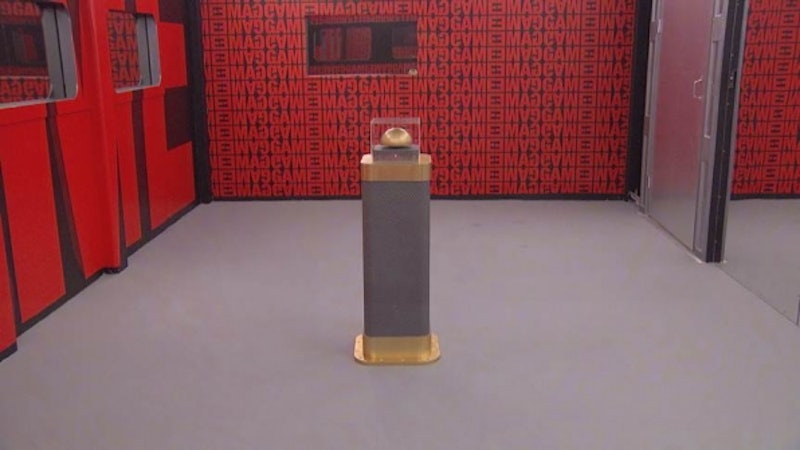 I love when Big Brother has a game-changing twist added to the final weeks of the game. At this point in the season, the houseguests get kind of boring and seem ready to finish up the summer, so when Big Brother introduced the Rewind Button on Thursday, my ears immediately perked up. A button that could change the entire game around in a matter of minutes? Sign me up. But wait, what's that Julie said about the button's ramifications not coming into play until Wednesday's live eviction? So I have to wait an entire week to see Victoria's jaw drop to the ground upon realizing she is safe?

While this twist is much needed, I feel like it is maybe a waste of our time? Sorry, Julie, but really, why is production spending an entire week to produce the game, when come Wednesday you'll tell the houseguests that it doesn't even matter? The Big Brother Rewind Button means I can't get too emotionally invested in the nominees. It means I can't care who wins veto. I shouldn't really listen to the campaigning, because NONE OF IT REALLY MATTERS. So if it doesn't even matter, why are we spending three days this week to watch it?

Because this week seems like a farce, a simple mockery of the game we should be watching, why is CBS making us watch an entire week? Watching the live feeds is painful, as I just want to scream through my computer to let them know that it is all a hoax and they shouldn't get too invested in the week. There are much better things I could be doing with my hours this week than to watch three episodes of Big Brother that won't matter at all on Thursday. The only real reason for me to watch this week is to tune in to Jeff and Jordan's return/proposal, and that is only because I am overly invested in that relationship because I watched it form on their season of Big Brother.

In case you also feel hurt by Big Brother for a wasted week, here are three things you can do instead of watching the pointless episodes.

Am I the only one who sees the Big Brother finale being the scene out of The Notebook in the rain with Frankie saying, "It wasn't over... It still isn't over."? And then whatever happens after that — ahem — will be fine by me.

3) You can be reminded that underneath that dinosaur costume, there's this