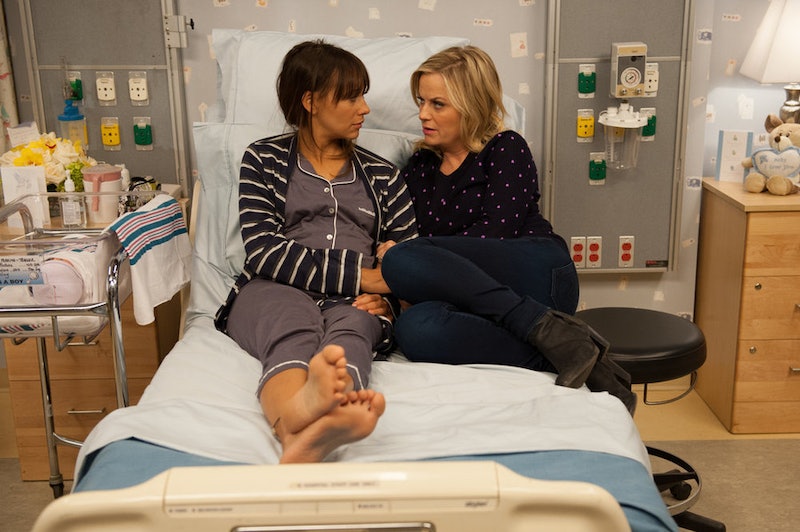 Ann Perkins, you beautiful, naive, sophisticated newborn baby, won't you come back to us for Season 7 of Parks and Rec ? When Ann Perkins left Pawnee with Chris Traeger and all of his positive energy, it felt like my own best friend was being ripped from my arms, mid-hug, as some type of Sarah McLachlan song played slowly and a montage of all our BFF selfies played ad nauseam. And that's all for the character of Ann. Don't even get me started on how I felt when I found out Rashida Jones wouldn't be a series regular anymore.

The final half of Parks and Recreation Season 6 felt amazing and awful all at the same time. The episodes were great, as always, but I felt an emptiness inside without Ann. The Ann insults from April were at their least frequent, Ann and Leslie's BFF time was little to none — but of course Leslie was there for Ann giving birth — it just felt off. So with the final season upon us, one has to ask the very important question of will Ann Perkins return to Pawnee?

The Season 6 finale leaped forward three years into the future; Leslie has a new job, three new kids, and new bangs — which you know she got because Ann had bangs. Unfortunately, from the looks of Jones' upcoming projects, it doesn't look like Ann will be coming back for the final season as a regular, as much as we'd love for that to happen. Her life with her son Oliver and Chris Traeger is probably going great in their new town. Oliver is probably the happiest, most positive toddler at a trendy daycare. Chris probably picks him up each day after work during his 10 mile jog, strapping Oliver on for some added cardio. What I am trying to say is... Ann and Chris' life isn't in Pawnee anymore. I know, it isn't easy to accept.

But, with this being the final hurrah season for the show, and with the showrunner not set on a specific end, there is still a huge possibility for Ann to return, even if it is in the final episode of the series. They did it with Steve Carell's Michael Scott in The Office; there is just something that feels necessary about bringing back old characters for the final season as a hat tip for those that have stuck by the show from the very beginning.

Ann, you poetic and noble land-mermaid — I couldn't have said it better myself — don't be a stranger in Pawnee this season, please.