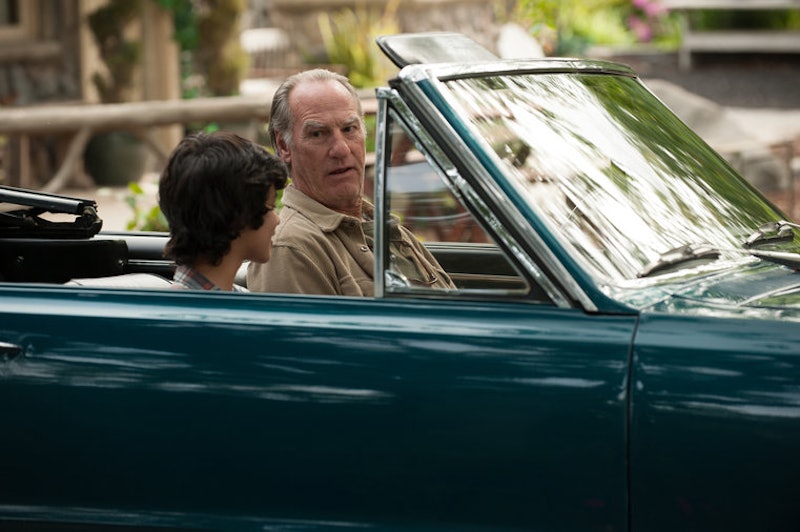 Brace yourselves, Braverman fans. The final sobfest, er, I mean the final season of Parenthood premieres in just a few weeks. We've all seen the hints from Jason Katims and the Parenthood cast over the last few months and we've theorized everything from Sarah possibly being the pregnant one, to Kristina's cancer coming back, to Julia and Joel potentially having more marriage trouble (no!) and literally everything in between. But after Katims revealed that Season 6 would present a "huge new challenge" for the Braverman clan, it seems that Zeek Braverman might die before the Parenthood series finale. But will his death ruin the last season of this incredible show? Certainly not. In fact, it would probably solidify Parenthood as a show to remember for years to come.

While Zeek's death would certainly be a heartbreaking, tragic moment for every single person in the Braverman family, it would also represent a natural and real moment in every family's history. Tragedy has struck the Bravermans in many forms, but we have yet to see how the family struggles with losing one of their own. How would each peg in the Braverman clan take the news and how would it affect their lives in the future? Here's how I think the brutally honest show would handle such a crisis:

Zeek has taught Adam how to be the leader of his family and how to respect Kristina, even when Zeek hasn't taken his own advice for himself and Camille. It seems Zeek has also learned a great deal about love and sacrifice from Adam and his family, which I believe is one of the reasons he agreed to sell the house for Camille last season. If we lose Zeek, it would lead Adam to assume the patriarchal role in the Braverman family — he is absolutely Zeek's natural successor. But after watching his father grow as a husband and parent, Adam would be more mature, patient, and kind than Zeek was at the beginning of the series.

If Zeek and Adam weren't around to give Crosby a few swift kicks in the ass every now and again, there's no way Crosby would be the man he is today. He would have never accepted the responsibility of being a good father to Jabbar and he definitely would not have fought for Jasmine. If Zeek dies, Crosby will likely continue his growth as an adult with the help of his father's advice and actions, especially considering his willingness to sacrifice his home for Camille.

Surprisingly, Sarah has received a lot of help in the love department from her parents. Zeek was always the one who convinced Sarah to go out and meet new people and, despite their different ideals and life choices, Zeek and Sarah have always supported each other. Sarah and her kids could take Zeek's potential death the hardest (after Camille, of course), considering they spent so much time living with him and growing with him. Something like this could teach Sarah that life is too short not to give love a chance which could drive her fight for her relationship with Hank.

Drew has learned to become a man with Zeek's help. It definitely didn't come from his dad, that's for sure. And Amber and Zeek have gotten incredibly close over the last few years as Zeek is the only one in the Braverman family who really understands her beau Ryan. I'm not exactly sure how these two will react if Zeek dies (besides the obvious waterworks), but I believe that Drew will continue to try and be the man Zeek knows he is.

Julia and Joel may be dealing with some tough moments in their lives, but during all the marital troubles, Julia received so much love and support from her family, and especially from Zeek and Camille. Zeek even spoke with Joel and gave him a much-needed talk about how Zeek took Joel in as a son and how Joel cannot give up on his marriage without a fight. Zeek also helped Victor become a part of the Braverman family and that's not something this couple will be able to forget. If he does die, it's entirely possible that it will bring Julia and Joel back together again. Hopefully for good.

Season 5 of Parenthood finally gave us some much needed happiness for Camille and Zeek. Zeek finally learned to compromise to keep his marriage and wife happy, but with Zeek's possible death striking so soon after his growth with Camille, Mama Braverman will be completely devastated. Of course, she will have the happiness of knowing that their marriage was stronger than ever before he passed.

It's tough to imagine the Braverman household without Zeek, but if any show can take away a beloved character in a sad but smart and proper way, it's Parenthood. I may not like the idea but if it has to happen, I trust you, Jason Katims. You won't let Parenthood fans down.