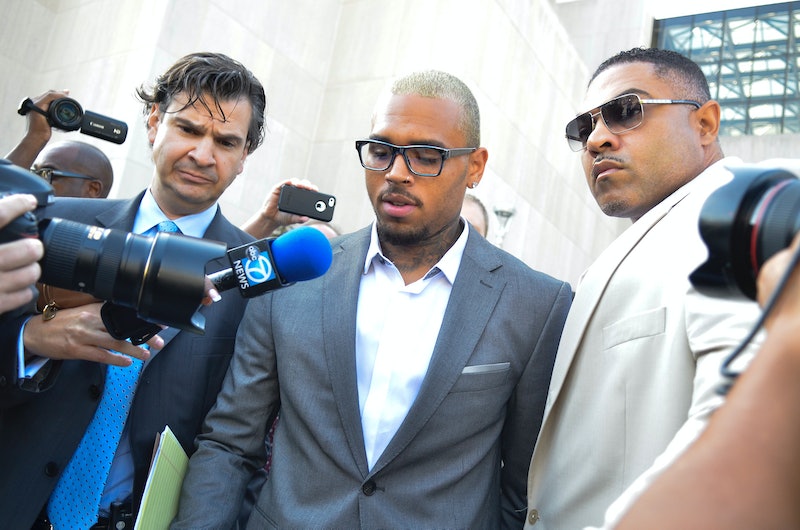 Update: According to the New York Daily News, eyewitnesses have come forward to state that Chris Brown had nothing to do with the nightclub brawl and was, in fact, on the other side of the room with his crew when the fight broke out in front of the DJ booth.

Well, that didn't take long. Much like possible friend Justin Bieber, Chris Brown has a tendency to give everyone opinion whiplash. One week, Brown is accepting a plea deal so he can go back on tour, because his career comes before any genuine remorse over his actions in the D.C. assault case. The next week, Brown is admitting that he's out of control and giving us the hope that he's self-aware enough to start improving his behavior. Now Brown and his crew were allegedly involved in a nightclub brawl — again — and even though no arrests have been made just yet it's hard to fight the deja vu feeling that comes along with news like that.

Listen, I was willing to give Brown the benefit of the doubt once he was released from jail. He went right back to working on his album and aside from a few hiccups — like hanging out with Bieber — things have been about as good as one can expect. Now, he's already ruining that, whether he was actually the one who got in the fight at the nightclub or not. If the story is true, the fact that Brown was out, and continues to associate, with people who would, according to Page Six, participate in a "scuffle [that caused someone] a serious eye injury" is proof that he hasn't learned his lesson at all.

This is his chance to finally put his past behind him, having resolved all of his legal issues and being ready to get his music career back on track. It's not too late for him to turn his reputation around before he joins Bieber on the list of Most Hated Men in America next year if he takes some steps.

I know, I know. Partying and pop stars pretty much go hand in hand. Asking pop stars not to party is like asking the sun not to shine. However, Brown said that he was going to cut negative influences out of his life, like drugs and alcohol, and it's starting to feel like that promise was just for show. If he stops putting himself into situations that could cause him to fall back into old habits, then a cleaner image could happen.

2. Party with the right people.

Like I said, I don't expect Brown to be willing or able to quit partying cold turkey. That's why, when he does go out, he should surround himself with a healthier entourage of people. He doesn't have to ditch all of his old friends, but running around with people who so quickly got him involved in another nightclub brawl is not going to help him avoid jail time or being judged by a public who has been waiting for a screw-up like this.

Brown took a plea deal in the D.C. assault trial because he was tired of his legal issues getting in the way of his music, so it really shouldn't be too much for me to request that he actually focus on the music. In fact, Team Breezy will only rejoice if he's so busy making new music and filming new music videos that he can't go to nightclubs at all.

4. Learn from his mistakes.

This much should be obvious, but Brown does a lot of talking and reflecting and not a whole lot of reforming and behaving. He was recently able to admit that he's out of control, so why can't he show how self-aware he is by taking control of his own fate? There are only so many times you can say you made a mistake before people just forever assume this is the kind of person you are — and it might already be too late for Brown.

Anger management hasn't really worked out for Brown to this point, but isn't it about time that he actually tries proving that he's working on getting his temper in check? All of the above actions are all well and good, but unless he actually puts the effort into showing people that he's committing to becoming a better person then his actions might ring as hollow as his words.

The closest we've gotten to an apology from Brown — one that wasn't given to a court judge anyway — is his admittance that he's been a little out of control. In fact, that statement was more genuine than any apology statements that Brown has made in the past. When he slips up, I would like to see some genuine remorse followed by behavior that shows that he's actually sorry — unlike when he assaulted Rihanna and then threw a chair at a window when Good Morning America later asked him about it in 2011.

I just think that it's best the two of you work on rebuilding your reputations separately for a while, okay?