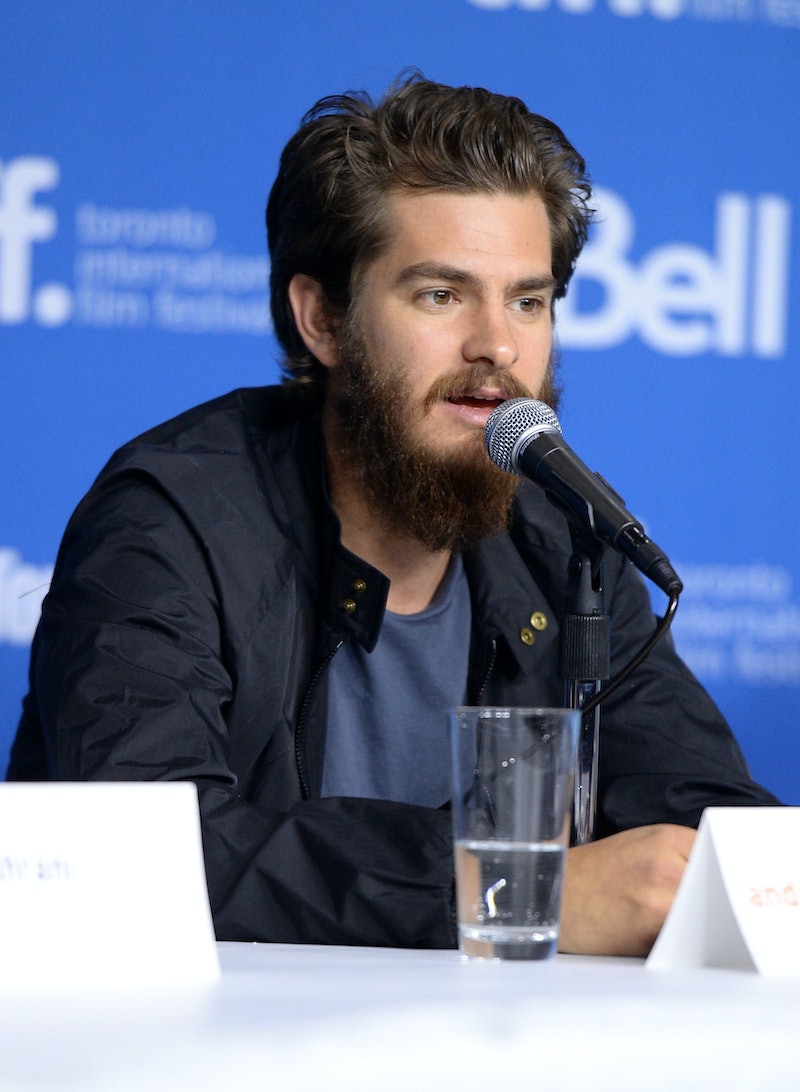 After nearly 10 days since the giant nude photo leak of several Hollywood starlets from Jennifer Lawrence to Kate Upton and Kirsten Dunst, a surprisingly small amount of male stars have come to their coworkers’ defense. Hardly any, really. Comedian Seth Rogen tweeted against the hacking and the privacy violation for the women, and late night hosts David Letterman and Jimmy Fallon made steadfast stances on not blaming the actresses or even looking at the photos. Hollywood leading men were tight-lipped and inactive when it came to taking a formal stand on the issue, but now Andrew Garfield has spoken out on the nude photo scandal up. Even though his girlfriend Emma Stone wasn’t included in the crime, that’s beside the point when the basic human right to privacy and decency is concerned.

"It’s disgusting," the British actor said in an interview with The Daily Beast. He said that the hacker (and some of the general public's) thinking that, "'I have a right to your naked body or images that you’ve sent to your husband, or lover.' It’s disgusting. It’s this violent, abusive violation of womanhood — of divine womanhood. It’s violent, and it’s misogynistic, and it’s revolting, and it’s another example of what this distance has enabled us to do — it’s enabled us to be disassociated from each other."

Another actor recently opened up about the scandal too. In an interview also with The Daily Beast, Josh Hutcherson, Mockingjay actor and Jennifer Lawrence's friend, had this to say about the scandal: "It's fucking horrible. I haven’t spoken to her since it happened, but as far as the public, Twitter, and media have reacted, it’s awful."

It's great to see these two Hollywood actors coming forward to speak against what happened, but for a while it seemed like it was only this tweet from Seth Rogen representing the male demographic of the industry:

Glamour did an excellent job pointing out the imbalance of those speaking out about the crime — that’s what it is when you illegally invade someone’s private property — because for some reason the A-list men of Hollywood haven't been speaking out. That, to me, speaks volumes. Seriously, I think I saw more tweets from celebs about the Apple announcement, than anything about the treatment of their fellow workers in the industry.

While actresses from Emma Watson to Lena Dunham came to the defense of their fellow actresses, I’m frankly surprised that not more actors have come to the defense of the women they work with. Not that these women need to be viewed incapable of speaking for themselves — they don't need saving by Hollywood's leading men, but that's not what their silence says. Their silence says that there's a lack of unity in Tinseltown over the issue because the actresses effected by the leak are their equals in the same industry.

Don't they see, as the Glamour article posed, that men were the target audience for this leak of 100 nude photos of their female coworkers? Don't they see that speaking out against the hacking and being big enough to say that they would never look at these photos would diminish the temptation to hack in the first place? Who knows what the next hacking scandal could be, because this time it was their female compatriots being hacked, but later on it could very well be their own photos. Hey, they're actors and entertainers too. The hackers obviously thought that was enough reason to hack these public figures' accounts.

Rogen, Watson, Dunham, Hutcherson, and Garfield weren't directly involved in the scandal, but they definitely understand that their careers as actors and actresses would make them a target for it. It's time other actors stepped up.

More like this
Chloe Pirrie Is Ready To Take The Next Step
By Sam Ramsden
Beyoncé & Madonna’s “Break My Soul” Remix Honors A Group Of Black Icons
By Stephanie Topacio Long
Naomi Osaka & Emma Raducanu’s Experiences Have Inspired A New Amazon Show
By El Hunt
We’ve All Had Bad Sex. Nona Willis Aronowitz Is Talking About It.
By Sophia Benoit
Get Even More From Bustle — Sign Up For The Newsletter