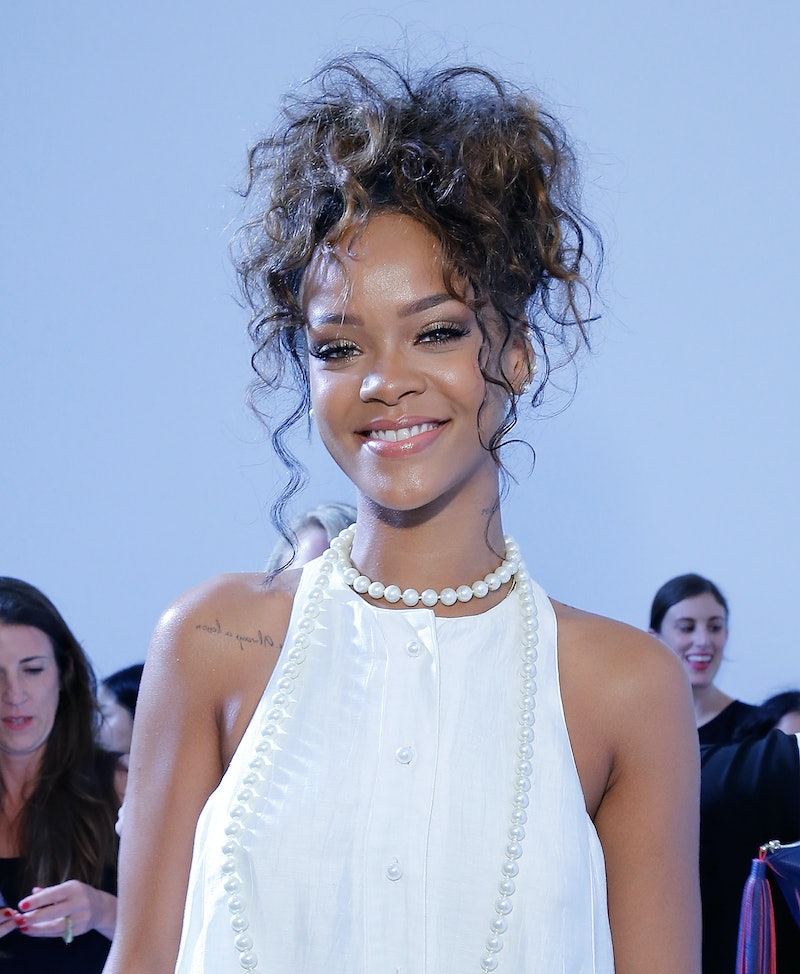 It has been five years since Rihanna was physically assaulted by her then-boyfriend Chris Brown and, unfortunately, since then Rihanna has kind of been held up as the poster child for domestic violence. She and Brown might have long since moved on, but the incident is so fresh in the minds of the pop culture-savvy that it might as well have just happened yesterday. In fact, even the most casual Rihanna fan could probably list the assault as one of the main facts they know about her. That's what makes it incredibly painful to discover that Rihanna will be performing before the Baltimore Ravens game Thursday night in light of current circumstances.

For those who haven't heard, NFL running back Ray Rice had his contract terminated after he was arrested and indicted for third-degree aggravated assault. TMZ leaked a video of Rice punching his then-fiancée in the face and knocking her unconscious before carrying her limp body out of the elevator. Rice's contract with the Ravens was terminated very recently, in fact, on September 8, making this situation even more awkward. The irony and inappropriateness of this ill-timed pairing of Rihanna and the Baltimore Ravens has not been lost on fans, who have reacted to the announcement with a combination of shock, confusion, and dark amusement.

To be honest, I think it's a terrible idea for Rihanna to perform before the Baltimore Ravens game. I don't doubt that this performance has been set for a long time, but there must have been plenty of time for either Rihanna or the Baltimore Ravens to cancel her performance before the announcement on Thursday and the fact that either party didn't take advantage of the opportunity to avoid this PR snafu is bewildering. The NFL has a long history of sweeping domestic violence and assault incidents under the carpet, so the fact that they would book a victim of domestic violence for a performance in the midst of a prominent scandal is really, really inappropriate.

I can understand what they think they might gain from this. For the Baltimore Ravens, having Rihanna perform is their way of disassociating themselves from Rice and his actions. It took them months to actually terminate Rice's contract over a domestic violence incident he was arrested for in February. By cutting Rice and having Rihanna perform, it could be that they are trying to show that their solidarity is, and has always belonged with, the victims of domestic abuse. It could be their way of apologizing for taking so long to punish Rice for his crime. It could even be a promise to do better in the future.

Or I could just be painfully optimistic. As for why Rihanna agreed to the performance, or didn't pull out after the Rice scandal, I can't even begin to guess at her reasoning. I can't even decide if it's worse that she's performing while fully aware of the scandal and not caring or if she's performing in full ignorance of the scandal and feeling that it's too late to back out now. Either way, she doesn't seem to have much to gain from an incident that could have so easily been avoided.

At the end of the day, this is still an unfortunate situation. It reflects badly on the Baltimore Ravens to have a past victim of domestic abuse perform for a team that ignored a domestic abuse incident for six months before taking any action and it once again reduces Rihanna to the title of domestic abuse victim, guaranteeing that people will be talking about nothing else attached to her name for days to come. It's an awkward and cringe-inducing association on both sides and the fact that they haven't offered any kind of explanation just makes it all the more baffling.

I don't claim the right to advise Rihanna on what she can and can't do, or to cast judgment on the way that she chooses to deal with the skeletons of her past. Technically, that's her business and I'm sure that her performance will be nothing short of amazing. However, I think the timing on this was incredibly poor and that it doesn't matter what the NFL's intentions behind this move were. This is the kind of thing that will leave a bad taste in many mouths, mine included.