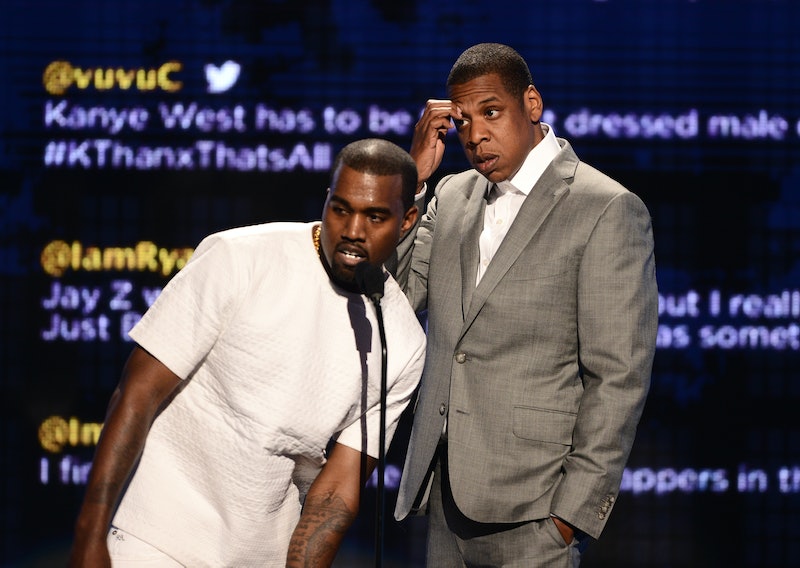 Out of all the frenzy surrounding the international affair that was the Kimye wedding, one of the burning questions was whether Beyoncé and Jay Z would attend. When the Carters opted to skip out on the ceremony, it didn't matter that Beyoncé wished the newlyweds well on Instagram because people continued to watch the throne closely for some sort of tension between Kanye West and Jay Z. However, I wouldn't hold my breath for a Kanye rant against Beyoncé's husband anytime soon, particularly West and Jay Z co-produced a film, which suggests that their friendship is firmly intact.

Yeezy and Jay Z teamed up to work behind the scenes of the new film Top Five, and just like its co-producers, the cast isn't short on star power. According to Deadline, the film stars Chris Rock and "tells the story of New York City comedian-turned-film star Andre Allen, whose unexpected encounter with a journalist (Rosario Dawson) forces him to confront the comedy career—and the past—that he’s left behind." The film also stars Kevin Hart, Tracy Morgan and Sherri Shepherd.

While it remains to be seen if Beyoncé and Kim Kardashian will become besties who sip expensive champagne together, swap baby stories and bond over what it's like to be married to megastar rappers, the West and Jay Z friendship doesn't appear to be losing its strength anytime soon. The Carters' skipping the wedding didn't bother Kris Jenner (at least not publicly) and seeing Jay and Yeezy team up on such a huge project shows that it really didn't impact them either. In fact, I wouldn't be shocked to hear them announce another joint album or even a fashion venture. Maybe Jay Z and West can team up to create their own line of masks. In the end, even if their wives are closer to frenemies than they are to constructing their own throne together, it's obvious that it'll take a little more than a wedding invite to come between Jay Z and Kanye West.