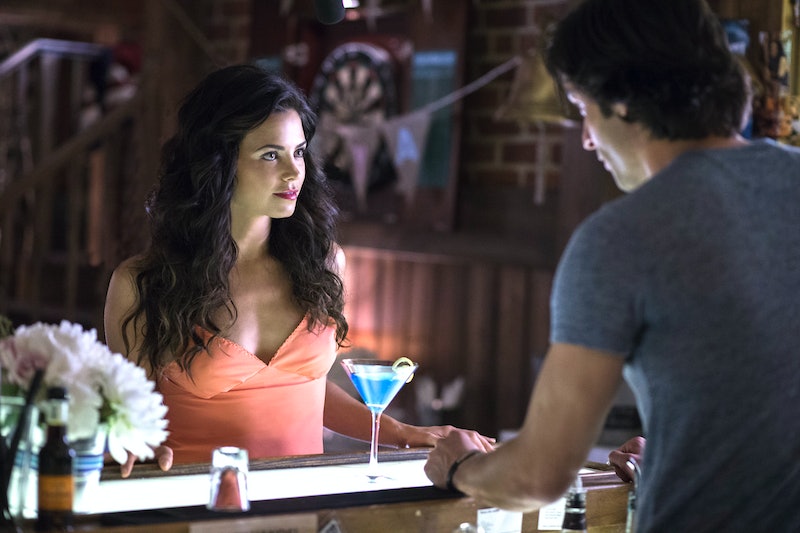 I am such a sucker when it comes to star-crossed lovers — West Side Story is my favorite movie EVER, even though it ruins me emotionally every time I watch it. So, of course, my favorite couple on Lifetime's Witches of East End is Freya and Killian. Though they hooked up in the episode "Sex, Lies, and Birthday Cake," will they be able to successfully get together before Killian's witch wife, Eva, gets pregnant? Eva's grandmother-daughter (more on that later), emphasized the importance of Eva getting pregnant with Killian's baby. Can these star-crossed lovers break the spell before that goes down?

The episode was centered around Freya's (and kind of Frederick's) 30th birthday, but Freya wasn't pumped for the party, as she said, "I've lost my soulmate — that's all the love I'm going to get in this life." Don't worry though! Said soulmate was conveniently the bartender at the birthday party. Unfortunately, Killian is still under Eva'a love spell, despite him growing a tolerance of it. And Eva's "grandmom's" advice to her was, "Just get that baby. Any way you can." Thanks, Abuela Alma. That's not crazy at all. But wait — at the end of the episode, Eva's abuela was actually revealed to be her hija — so she's Eva's elderly daughter instead of her grandmother. (Of course! Eva is a super old witch using a spell to look younger.)

Back at the birthday party, Killian had temporarily freed himself of Eva's spell while in the presence of his true love — Freya. Seductive banter ("Careful it's hot," and ,"I think I can handle it.") between the pair led to sexy sex. (Cue Journey's "Open Arms.")

You only turn 30 once (well, once in this current incarnation of your life), so you might as well live it up. I have to ask though, was anyone left at the party? Seems like everybody was out banging.

Now according to this promo video, a character will be dying in Sunday's episode, "Smells Like King Spirit" (spoilers ahead).

But based on this photo for the episode that will air on the following Sunday, Sept. 21, "The Fall of the House of Beauchamp," both Freya and Killian (and Ingrid) will return.

The Beauchamp sisters aren't looking too good in that photo, so there is a chance they could be the ones to "die" (Joanna did look super upset in the preview), but based on this next photo, I'm fairly certain it won't be a permanent thing.

Frederick could also possibly die in "Smells Like King Spirit," but if that's true, it will potentially mess with Killian escaping from Eva. Frillian always needs some opposition (although, I hope the show will give us a slice of them being happy for longer than a few minutes of an episode — please?), so if one opposing force is beaten, another one will have to arise. Frederick warned Killian to stay away from Freya during their birthday party, so I was thinking Frederick could replace Eva in the "keep these two apart" role. But if he dies, then there will still need to be some force between the two lovers. Maybe it will be Freya's "death" that will turn Killian even more into the Romeo character. Can't these two catch a break? They are so good when they are together!

After "Sex, Lies, and Birthday Cake," Freya has to know there's foul play going down in Killian's marriage. He revealed that Eva is a witch and Killian did a complete 180 on her. If Killian can't free himself of Eva, I'm thinking Freya (and maybe some more of the Beauchamp women) can help. I'm just really concerned that it won't happen in time to stop Eva from getting pregnant with Killian's baby. Could these soulmates sustain such a blow? Although I won't be happy about it, Eva's grandmom sure will be — she needs a sibling.