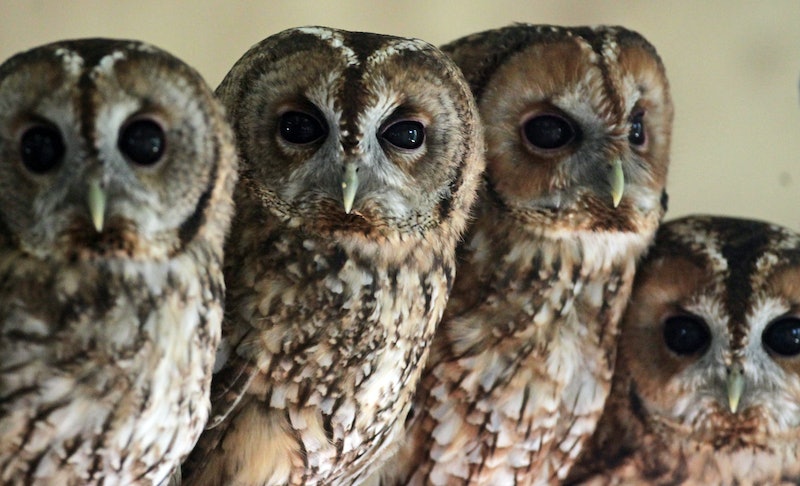 I’ve always preferred nighttime to daytime. Maybe it’s my dark soul, or this bizarre feeling that I’ll miss out on something if I go to bed early. Like, what if my ex texts around 4 a.m. to tell me he’s sorry, and I miss it? You know, important stuff like that.

I also work better at night. Trying to function between 9 a.m. and noon is a struggle, but give me an assignment that I can do between midnight and 2 a.m., and I bust that baby out in no time at all. It’s both a gift and a curse — and when 9 a.m. rolls back around, I realize just how much of burden being a night owl can be. (That’s why I’m sitting here with my second double espresso as I write this, and it certainly won’t be my last of the day.)

To a morning person, we might seem strange, but I assure you, being a night person is like an exclusive club. If you're a fellow night owl, you know what I'm talking about. There’s some things those morning people just don’t understand. Here's what it's like.

AS A KID, YOU COULDN’T WRAP YOUR BRAIN AROUND WHY BEDTIME WAS SO EARLY

SO YOU’D GO TO BED AND LAY THERE FOR HOURS...

Insomnia came early for you.

...just DREAMING OF THE DAY WHEN YOU COULD GO TO BED AS LATE AS YOU WANTED

Which would be the glorious time of midnight or later, of course

but INEVITABLY, YOU’D have to get up IN TIME FOR SCHOOL anyway

bY MIDDLE SCHOOL, YOU'd MASTERED THE ART OF READING UNDER THE COVERS WITH A MINI FLASHLIGHT

Because your reading comprehension skills really flourished after the sun went down.

BUT MASTERING THE ART OF GETTING UP AT 7? Not so much

Not just because there was no school, but because you could stay up all night and sleep in until 3 p.m., if you wanted to.

and once you got there, YOU LEARNED THAT PULLING AN ALL-NIGHTER WAS actually WHEN YOU DID YOUR BEST WORK

It’s like information just seeped into your brain and stayed there better at 3 a.m.

because FOR YOU, THERE'S NO BETTER CLARITY IN THE WORLD THAN THE ONE THAT COMES IN THE MIDDLE OF THE NIGHT

BY THE TIME YOU TURNED 21, YOU WERE THE LAST ONE AT THE BAR

BECAUSE YOUR SOCIAL SKILLS ARE even BETTER AFTER MIDNIGHT

AND YOUR JOKES ARE WAY FUNNIER, TOO. right?

If you have to be in an office by 9 a.m. every morning, it will just be a matter of time before you’re fired.

BUT NIGHTTIME JOBS ARE FEW AND FAR BETWEEN

Which means the real world is going to be a real bitch.

so AFTER GRADUATION, YOU LIKELY MOVED TO A CITY WHERE THE PEOPLE STAY UP ALL NIGHT

Ideally, Berlin would work, but who wants to deal with visas?

you know, a place where YOU can SOAK IN THE NIGHTLIFE

Although you never find that nighttime job.

but turns out MOST JOBS STILL NEED YOU TO WAKE UP

so these days, YOU CONSISTENTLY LIVE IN FEAR OF SLEEPING THROUGH YOUR ALARM

But you know your boss isn’t buying it.

YOU TRY TO GO TO BED EARLIER, BUT IT’S LIKE BEING 8 YEARS OLD ALL OVER AGAIN

when you go on vacation, you fall into your usual pattern of staying up all night and sleeping all day...

...Which makes learning to get up in time for work again hell on earth

still, YOU STRONGLY FEEL THAT GETTING UP BEFORE 11 A.M. IS somehow UNDIGNIFIED

and that MORNINGS WITHOUT COFFEE ARE LIKE nights WITHOUT darkness

YOU’RE FOREVER SUSPICIOUS OF THE MORNING PEOPLE IN YOUR OFFICE WHO ARE CONSISTENTLY HAPPY AT 10 A.M.

LIKE, IS THIS MORNING PERSON THING FOR REAL OR JUST FOR SHOW?

Let's be honest: It's hard to trust someone who smiles that early in the morning

Not to mention how bad they make you look in contrast.

BUT at least YOU’RE THE MOST FUN AT HAPPY HOUR

You know, the happy hour that goes until dawn and beyond in your book.

not to mention, YOU HAVE MORE SEX THAN MORNING PEOPLE

Seriously. It's science. We may have less long-term relationships than those morning folk, but when it comes to sex, night people score more.

AND YOU'RE MORE CREATIVE

NOT TO MENTION, MORE INTELLIGENT, TOO

Who's the smartest one in the room? You are!

BUT honestly, YOU DON’T REALLY CARE WHAT PEOPLE THINK OF YOUR MORNING BEHAVIOR

BECAUSE in the end, THE NIGHTTIME IS YOUR BEST FRIEND

AND YOU just DON’T QUIT YOUR BEST FRIEND

Even if our capitalist system is conspiring against you.