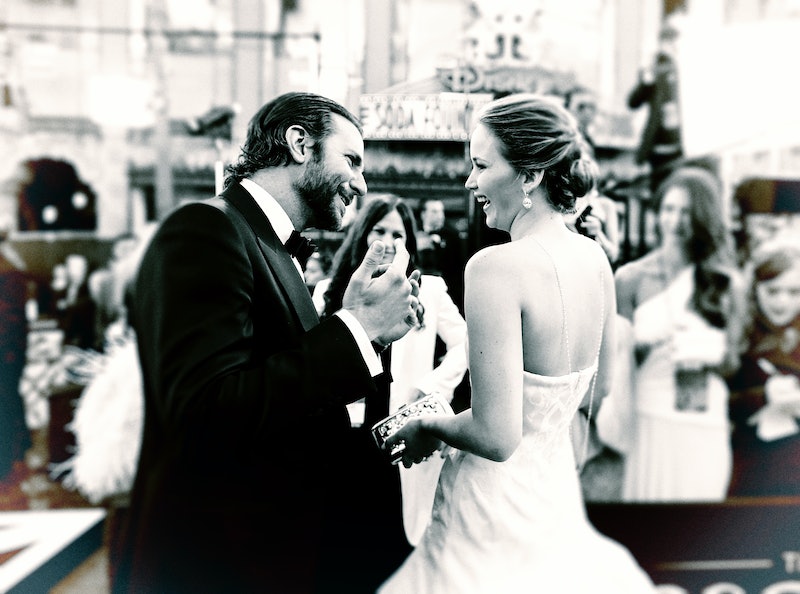 Bradley Cooper and Jennifer Lawrence are meant for each other. Yes, I know Bradley Cooper has been with Suki Waterhouse for a million years now and Jennifer Lawrence is apparently with Chris Martin, but compatibility doesn't always have to be romantic, people. It can also be evident in a great friendship. Although, yeah, if Cooper and Lawrence ever woke up one day and realized that all that was missing in their lives was each other, then I would contact the mayor about having a full blown parade down Fifth Avenue with floats, marching bands, and the like. Point is, whether they're amazing costars and friends, or holding out until they can finally be together, Jennifer Lawrence and Bradley Cooper have a real connection.

When you consider the amount of films they've been in together at this point, it's common knowledge that J. Law and B. Coops are on the same wavelength. Now, after watching the trailer for Serena — aka their latest stab at breaking the record for starring in the most movies together — I couldn't help but recall all those times that Lawrence and Cooper shared perfect, banter-filled real life moments promoting their movies like two peas in a very attractive pod. Someone needs to get these two a talk show or a reality show or something. It'd be a stream of endless entertainment and they're pretty damn easy to look at, too.

Here's some moments that prove these two are just as much of a dynamic duo off-screen as they are on:

WHEN J. LAW GAVE BRADLEY ALL THE CREDIT

AND WHEN HE DID THE SAME DAMN THING

THEY REALLY CAN'T STOP, CAN THEY?

WHEN THEY WERE CALLED OUT FOR ACTING LIKE A COUPLE

It's understandable as they're act like a couple dorks together.

WHEN COOPER ANSWERED ALL OF LAWRENCE'S QUESTIONS FOR HER

And she wasn't having it.

I'm pretty sure J. Law could have fun in a paper bag.

WHEN UGH, THIS HAPPENED

AND, WHEN HE WAS THE UNSUNG HERO OF HER INFAMOUS ACADEMY AWARDS FALL

That's right, Hugh Jackman wasn't the only one. Also: LOOK HOW HAPPY HE IS FOR HER. Perfection.