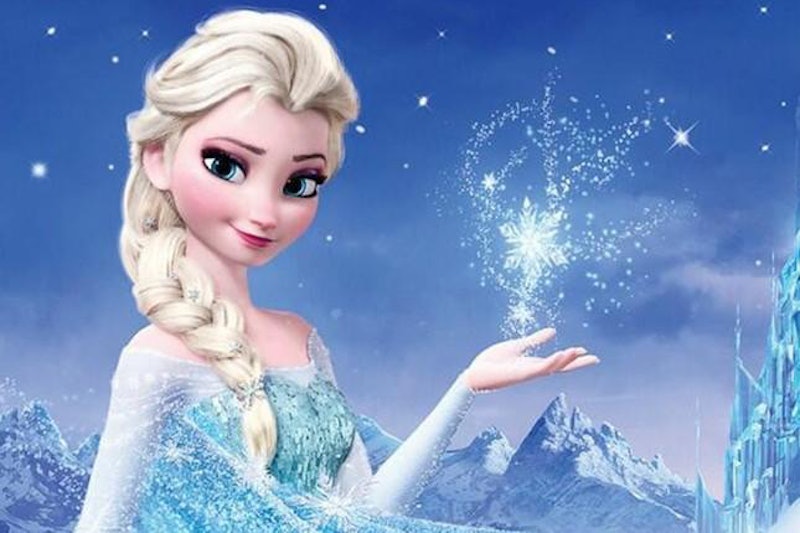 You saw it coming, didn't you? Disney Parks has announced that Frozen will become an attraction at Epcot Center in Walt Disney World in Florida, giving fans and reluctant parents the opportunity to immerse themselves in the fictional Arendelle in fake Norway, since going to the actual Norway might have been a tough sell, even for the most generous of parents. And why go to real Norway when you can eat imitations of Norwegian food in the most magical place on earth? Exactly. That's culture and America in one icy nutshell. And besides, now cries of "Mo-om, Da-ad! I wanna go to Norway and meet Olaf!" can be answered with, "How about...Disney World?"

Disney execs are no fools. They're probably thinking, "ELSA PLUS ANNA EQUALS DOLLA DOLLA BILLS, Y'ALL." Folks who visit Norway in Epcot will have the opportunity to meet the dopplegangers of the Magic Kingdom's Princesses Anna and Elsa — 'cause don't you forget, they'll be there, too! Frozen is everywhere, invading your family vacations and exploiting your wallet.

Back in the spring, lines to meet Anna and Elsa at Disney World were a whopping three hours long — enough time to watch the whole movie twice — so perhaps instating this parallel Frozen universe could aid in cutting down those wait times (Probably not, though. Who am I kidding?)

Had enough of Frozen by this point? Aching for your Disney World vacation to take you back to 1992, when Belle reigned supreme? Well, you should toss that fantasy aside because Magic Kingdom is also expanding their current Frozen setup. Once the holiday season strikes, Princess Elsa will continue to exercise her powers by turning Cinderella's castle into an ice palace at night. Cinderella is probably like, "bitch, first my coach turned into a pumpkin and now this? I can't get a break." Don't worry, Cindy — come morning, the ice will melt and you will continue to reign in your castle! Just don't be upset when the kids come knockin' on your door wondering where Elsa went.

Hollywood Studios is also joining in on the Frozen fun by expanding its current Frozen Summer Fun LIVE! into the winter. This attraction will give kids the opportunity to play with fake snow, because real snow would be way too harsh on those young and impressionable hands. Plus, it's in Florida, so...

Disney, your ideas are wonderful and undeniably profitable, but here are some additional ideas to add to your already over-the-top Frozen land:

More like this
Meet The Disney Imagineer Bringing 'Guardians Of The Galaxy' To Epcot
By Charlie Mock
10 Eurovision Moments That Celebrate The Weird & Wonderful Camp Extravaganza
By Sam Ramsden
Elizabeth Olsen's Chris Evans Friendship Update Was Accidentally Hilarious
By Grace Wehniainen
Wait, Did Wanda Die In 'Doctor Strange And The Multiverse Of Madness'?
By Arya Roshanian
Get Even More From Bustle — Sign Up For The Newsletter