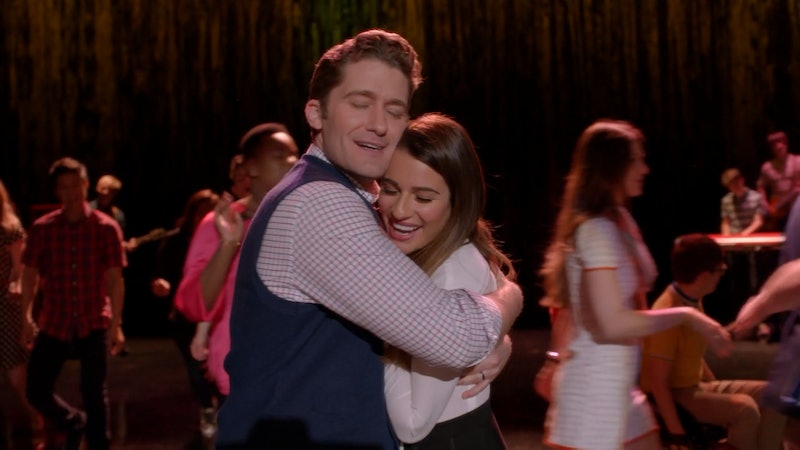 Dear Ryan Murphy, Brad Falchuk, and all of the Glee staff writers: I have a huge bone to pick with you. I sat by as you flaunted new characters in our face before quickly sending them packing from the Glee universe, pushed a random Glee flashback Christmas episode in the middle of a perfectly decent story arc, and forced us to listen to not two, not three, but four different renditions of "Don't Stop Believin'." This, however, is just too far: Are you seriously going to make Rachel Berry the new Mr. Schuester in Glee Season 6?

According to Glee spoilers from E! Online, that's exactly what the Glee writers are doing in Season 6. Rachel will join the staff of McKinley as the new leader of the New Directions after she fails miserably as a television star. She will introduce the new crop of McKinley kids (the ones who are even more new then the old-new McKinley kids like Marley, Ryder, and Unique) to show choir, which has become Rachel "Big Dreams" Berry's own fallback plan.

The sad truth is, this was never supposed to be Rachel's storyline at all — it was supposed to be Finn's happy ending, and it would have fit his character perfectly. Murphy revealed that Finn would have worked at McKinley after graduation as the new Mr. Schue, and Rachel would return to him after years of Broadway stardom. That beautiful ending never happened due to Cory Monteith's death in 2013.

While I appreciate the sentiment behind Rachel's new role, it does no service to her character or to fans of the show. When we first met Rachel, she was a self-proclaimed star who would do anything to be in the spotlight. After graduation, she attended NYADA, where she quickly became the school's ultimate diva. Then she fulfilled her ultimate fantasy and landed the lead role in Funny Girl on Broadway — something that she had been dreaming about (and talking incessantly about) since she first stepped into the show choir room. For some bizarre reason, the Glee writers decided to make it so Funny Girl wasn't a high point in Rachel's career — Rachel left the role just as quickly as she started and pursued the life of a TV starlet in Los Angeles.

It was a bizarre twist, sure, but nothing as weird as her failing at that, too, and heading back to McKinley. I had assumed that we would pick back up with Rachel in Los Angeles after the six month time jump, but alas, it's back to Ohio we go.

I can't understand why Rachel has given up on her dreams when, for the entire course of Glee, she has been defined by them. This is a huge leap for Rachel's character, and, to be honest, it feels off. Yes, Rachel has a lot of pride and is easily hurt by the comments of others, but are we supposed to believe that the girl who dreamed of getting out of Ohio is content in the same role as the teacher who told her to get out? I mean, this is the girl who said this without any trace of irony:

I hope that this time in Limo, Ohio is just a stepping stone for Rachel — something she needs to do before she throws herself back into show biz. Her ending up as the permanent Mr. Schue might be the most unbelievable thing to happen on Glee in years, and I sat through the "Rachel's-mom-adopting-Quinn's-baby" thing.