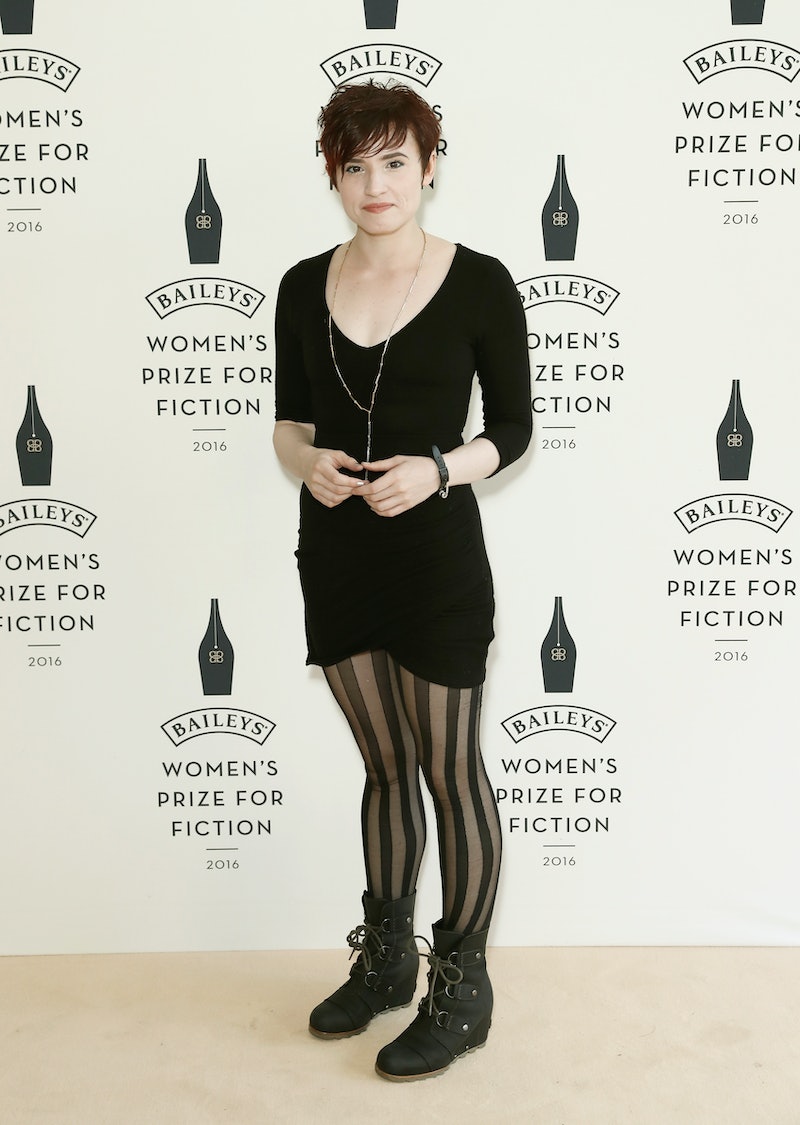 The first thing you need to know about British feminist Laurie Penny’s Unspeakable Things: Sex, Lies, and Revolution (Bloomsbury) — a collection of essays that range in topic from eating disorders and abortion to single mothers and Occupy Wall Street — is that Penny isn’t writing to squabble about the little things. And thank god. Because, as it’s been very, very well documented, feminist groups tend to sink themselves with infighting — in the famous words of Ti-Grace Atkinson, “Sisterhood is powerful. It kills. Mostly sisters.”

So let’s learn from Laurie Penny, who doesn’t care about your hair or your heels. She’s too worried about the “fucked-up girls” and “lost boys” of our generation. She wants to tackle what she sees as the problems causing their problems: the sexist “straitjacket” of gender and the ways our economic system keeps it on tight.

But, as Penny says herself, Unspeakable Things isn't a "handbook for happiness in a fucked-up world." First because it's about tough topics: Penny mines many of her own struggles — with anorexia, with low-paying jobs, with romantic letdowns. Nonetheless, she produces a feminist polemic that's angry and sad and somehow, despite the troubles it lists, a little hopeful. And second because it offers few solutions to many painful problems; what Penny seems to want most, after a more just and happy world, is mutiny. "It must be mutiny," she writes. "Nothing else will do. I sued to be less hardline about this. I used to vote, and sign petitions, and argue for change within the system. I stayed up all night to watch Obama get elected; I cheered for the Liberals in London.... No more of that."

But despite this, even after reading Unspeakable Things, there seems a chance that mutiny might not be the only option. If perhaps we listened to and acted on some of Penny's arguments, our generation could make the world a more, even a little more, feminist place.

1. Remember that the number of women in the boardroom is only a single, imperfect marker of feminist achievements; feminists should focus on the women who clean the boardroom after the meeting, too

The crux of Laurie Penny’s many-pronged is about women and work. For her, Lean In and its “middle-class, aspirational” feminism isn’t enough, because “while a small number of extremely privileged women worry about the glass ceiling the cellar is filling up with water.” She thinks that “there are altogether too many boardrooms, and none of them are on fire.” While this view is extreme (I don’t recommend setting Goldman Sachs on fire unless you have some Piper Chapman-esque aspirations), it points out the selectiveness of a feminism that plays by the rules rather than breaking them — there’s only so much you can do. Calls for gender equality coupled with calls for comprehensive economic reform might do more for the multitudes of low-income, underrepresented women.

The take-away: To come back to Penny's point about cellars and ceilings, while many mark feminist achievement based on how many female CEOs there are in the Fortune 500, those measures obscure the fact that women are still the majority of minimum-wage earners, which is unfortunate since economic success can be majorly empowering. Therefore, feminists ought to think about progress at the bottom rungs of the ladder as much as the top. More general reform efforts that enfranchise lower rungs of the economic ladder often use the word "income inequality," and to read up on that, you might check out Thomas Piketty's Capital.

2. Own “slut power” and own your desire

“If I could take a red pen and annotate the world I would scrawl ‘slut power’ in letters too big ignore,” Penny writes in Unspeakble Things. It’s this combination of sincere yearning and enticing irreverence that makes Penny such an influential feminist essayist. To her, slut power isn’t just about what does and doesn’t go on in the bedroom, though the bedroom plays a large part. She defines slut power as speaking up, demanding fair treatment, and refusing to see “desire as dirty,” whatever that desire may be: the desire for to eat until you’re full or to be autonomous, the desire for better pay, or better sex.

The take-away: Don't limit yourself or your desires. Anything you hunger for, whether it be food, sex, or a certain job, eat your full share.

3. The personal is political, but don't overdo it when worrying about how your "personal" affects your "political"

To shave or not to shave? This may seem like a silly iteration of that famous Shakespeare quote, but questions about shaving, makeup, and feminine dress can be contentious terrain. Some feminists would say conforming to ideal beauty norms is submission to unfair and sexist expectations. Others, like Roxane Gay, do it anyway — even if it makes her a “bad feminist.” But Penny doesn’t care, and doesn’t think you should either, because as she puts it, “feminism isn’t about telling women what not to wear … Feminism is far more than a big-girls’ squabble over the dressing-up box, and there are more important things to do.”

The take-away: Use makeup if you want to use makeup. Do what ever beauty rituals feel good to you. Mostly: Don't make a big deal about it either way.

4. Remember that gender norms suck for many types of people, including men

Again, this has been another sticky point for feminists, especially in the past — there was, for example, a group named the “Society for Cutting Up Men.” But if you don’t plan on “cutting up men” anytime soon, take note of Penny’s argument which holds on to core feminist principles while showing compassion for the other other sex. Because Penny doesn’t believe in “the end of men,” and she doesn’t believe that gender equality is a zero-sum game. In fact, she sees men as necessary allies if a revolt against gender norms is ever really going to happen, because feminism requires men to see themselves in a not-so-flattering way: "The reason for a compassionate feminist approach to men is not to spare their feelings. Quite the opposite," Penny writes. "Compassion is necessary precisely because to live full lives as we move towards a society that treats women as fully human, men will be required to see themselves and their experiences in a new painful light."

5. Cybersexism hurts, but that doesn't mean you shouldn't speak your mind on the Internet

It sucks to be the target of it, and the Internet is not particularly kind to women who speak out as Penny does. Its anonymity means that you can act much more unkindly than you might, and there are many male-gendered folks doing so — take 4chan, for example, who Penny quotes saying, “There are no girls on the Internet.” And if you try to be a “girl on the Internet,” you’ll be called out for “attention-seeking” behavior, Penny argues. But like with the word “slut,” women shouldn’t allow this to censure their behavior on the Internet.

6. Beware of Love.™ "True love" won't save you, and actual love might not look like the "true love" at all

In this secular age, love is our new religion, Penny argues. When people of days past felt bad, they would have turned to some higher force to make themselves feel better. Well, today, we do that with love. Liking stuff like romcoms doesn’t mean you’re weak or foolish, Penny writes, it means that you want meaning and nice feelings, which is understandable in our not-so-great age of austerity. Hence the trademark sign — love, as a deeply devotional and passionate thing, has become a necessary consumer product. And though it might be a little hard to swallow this idea, it’s a beautiful argument: Penny has managed to combine her arguments about the problems of gender, pop culture, and the economy into one neat phrase.

Penny is perhaps most famous for popularizing this term, which basically refers to sparkly fairy-ish girls like Zooey Deschanel’s character in 500 Days of Summer. In movies, and sometimes in actual life, MPDGs swoop into a young “Zach-Braff-a-likes” life and add some twee glitter, which ultimately restores these young men’s faith in the world. This is a type, not a person, so no real woman is a Dream Girl all the time, but isn’t that the point? That if you do play this role, you’re acting like a type, a supporting actress rather than a leading lady in your own life.

The take-away: If you identify with Summer or another Summer-ish character, that's okay. But don't force yourself into a Summer-shaped mold if that's not you.

8. If you've ever made a feminist argument and got called out for using generalizations, turn to the following:

One of the problems feminism can run into: it often talks about “men” and “women” and “gay people” and “black people” and name-another-identity-group as if the people who fall in these categories are all the same. Generalizing like this can make arguments weaker, especially if you’re discussing feminism with someone who comes from the “individuals not groups” camp (I think all people think like this to some extent, but some more than others). If you’re talking feminism with a naysayer who points out the difference between a person and his/her identity group, fall back on Penny's argument: “If [the human brain] couldn’t handle big structural ideas at the same times as smaller personal ones, we would never have made it down from the trees and built things like cities and cineplexes.”

The take-away: Just because a generalization doesn't apply specifically to everyone doesn't mean it's not true. (This, in my own experience, has been the comeback of choice for people who believe only in individualism.) However, if you're going to use generalizations, read up on specifics, too — know that both are important.

9. Most importantly, don’t beat yourself up

This idea is hard to do but easy to explain, so I’ll just leave this here for you: “We must stop trying so hard to hold ourselves and others up to impossible standards, standards we didn’t set ourselves.”

More like this
10 Must-Read New Books Out This Week
By K.W. Colyard
Beyoncé & Madonna’s “Break My Soul” Remix Honors A Group Of Black Icons
By Stephanie Topacio Long
Dr. Anna Pou Is Still Practicing Medicine After Facing Murder Charges
By Brad Witter
This New TV Show Revisits The Most Controversial True Story From Hurricane Katrina
By Brad Witter
Get Even More From Bustle — Sign Up For The Newsletter