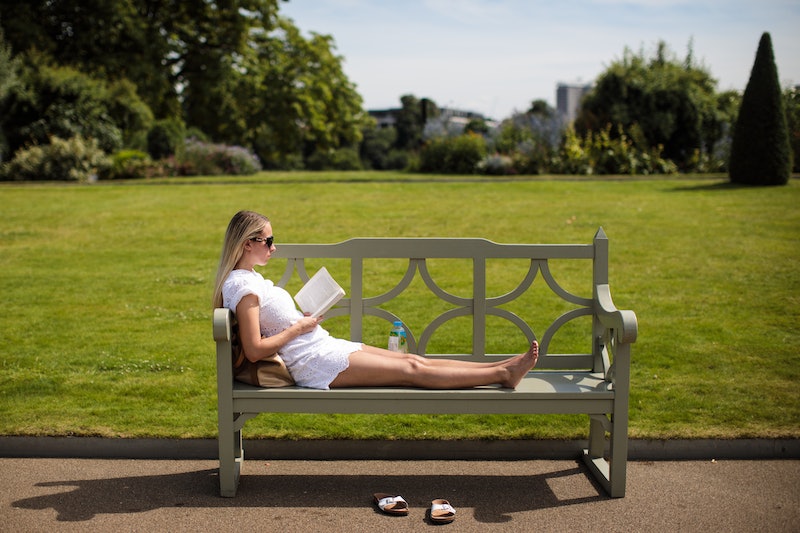 Women writers are “subtle,” “evocative,” and “gentle,” right? Not so much. If you haven’t read enough women’s fiction to disprove this idea, then wait till you get your hands on some of the following polemical feminist texts.

A polemical text is meant to argue a point — as Merriam-Webster puts it, a polemic is "a strong written or spoken attack against someone else's opinions, beliefs, practices." These feminist polemical texts claim back the ground of political thought and critical argument from the mansplainers of the world. They not only cover classic feminist discussions of education and autonomy, but also attack pillars of conventional thought.

Tired of being told to "calm down?" Well, so were these writers. With Wollstonecraft, Laura Kipnis, and Angela Davis all weighing in, these texts have been selected for their interest and assumption-busting power. From arguing for prison reform, to claiming the place of transwomen and sex workers in feminism, these ladies have taken off the gloves (silk ones and all) and gone in bare knuckled to fight their corners. Some are yelling louder than others (wonder what Woolf would have thought of Kathleen Hanna’s use of capital letters), but they’re all equally eloquent and inspiring, providing right-hook arguments to back you up next time you’re feeling distinctly polemical and furious.

A Vindication of the Rights of Woman By Mary Wollstonecraft

No list of angry women would be complete without the mother of them all. Written as a heated disavowal of the suggestion that women should only receive a domestic education, the Vindication asserts that women are not pretty household baubles and should receive proper teaching. Though some of the bases for her argument might seem a bit dodgy (education in order to be men’s ‘companions,’ anyone?), and her suppression of female sexuality is just downright out-dated, Wollstonecraft led the way in claiming fundamental equal rights for women. As she wrote, "Strengthen the female mind by enlarging it, and there will be an end to blind obedience."

We’ve all read A Room of One’s Own. (You haven’t? What are you waiting for? ) but Woolf’s Three Guineas is just as worth its place on the feminist bookshelf. Developing on the feminist goal of education, Woolf delivers in this text the imperative that educated women not adopt male values or perpetuate a society that has resulted in social inequalities and war. Rather, they should create their own institutions through independent incomes and opinions, and work to eradicate inequality for all.

[I]f you insist upon fighting to protect me, or ‘our’ country, let it be understood, soberly and rationally between us, that you are fighting to gratify a sex instinct which I cannot share; to procure benefits which I have not shared and probably will not share; but not to gratify my instincts, or to protect myself or my country. For, the outsider will say, “in fact, as a woman, I have no country. As a woman I want no country. As a woman my country is the whole world."

The “girl power” of the mid-'90s gave birth to more than just the Spice Girls. The punk-ethic and DIY spirit of the Riot Grrrl movement empowered young women across the globe to reclaim the word ‘girl,’ flip the finger to patriarchal and societal pressures, and proclaim their strength and independence through zines, music, and meet-ups. While raging against male abuse on stage and penning fiery lyrics that celebrated female and queer sexuality with her band Bikini Kill, Kathleen Hanna also found time to write the Riot Grrrl Manifesto, a fist-pumping list of reasons for a girl-led revolution. Think of it as the uncensored feminist version of "Wannabe."

Are Prisons Obsolete? By Angela Davis

In this slim volume, Davis answers her own question through a thoughtful and detailed examination of all that is wrong with the prison system in the United States. From the moral bankruptcy of privatization to sexual assault, racism, and the frightening proliferation of the ‘prison industrial complex,’ Davis shows that the system is not only failing prisoners, but society as a whole, and argues that it should be abolished.

Jails and prisons are designed to break human beings, to convert the population into specimens in a zoo—obedient to our keepers, but dangerous to each other.

Against Love By Laura Kipnis

I read this book before breaking up with my first boyfriend. (Interpret that as you will.) What’s for certain is that, whether or not this irreverent and keenly-written polemic also has you springing out of the domesticated double bed to run for the tropical wilds of unfettered singledom, it will make you rethink old attitudes to romantic love and monogamy. With healthy doses of Freud, Foucault, and Marx giving weight to her vigorous prose, Kipnis argues that we’ve blindly worshipped the ideals of “mature love and commitment” for long enough, and that it’s time to shake things up. In response to the old mantra of “relationships take work,” Kipnis responds: “Fuck work.”

After all, if adultery is a de facto referendum on the sustainability of monogamy […] this also makes it the nearest thing to a popular uprising against the regimes of contemporary coupledom.

Whipping Girl: A Transsexual Woman on Sexism and the Scapegoating of Femininity By Julia Serano

There was a time when transwomen’s voices were excluded from feminist discussion, but despite some hateful people’s continuing silencing attempts, those days are hopefully mostly behind us. In this collection of essays, Serano not only slams misconceptions of transsexuality and questioners’ obsessions with genitals, but also provides a searing interrogation of calcified ideas of “femininity” as frivolous and weak. A transfeminist manifesto for the third wave, this book shows just how revolutionary embracing femininity can be.

In order to survive as a trans woman, you must be, by definition, impervious, unflinching, and tenacious. In a culture in which femaleness and femininity are on the receiving end of a seemingly endless smear campaign, there is no act more brave — especially for someone assigned a male sex at birth — than embracing one's femme self.

In the current wave of discussion surrounding prostitution that is sweeping Europe and North America, Gira Grant’s is a voice worth listening to. A former sex worker (she was one of the first web cam girls) and current journalist, Gira Grant argues forcefully and eloquently in support of sex workers’ rights. Eschewing titillating accounts of glamorized escorts, or horror-inducing victim portraits, she argues that we should be focussing on the “work” and not the “sex” of sex work; looking to improve access to healthcare and working conditions, not to “saving” workers.

Sex workers should not be expected to defend the existence of sex work in order to have the right to do it free from harm. […] The experiences of sex workers cannot be captured by corralling them onto either the exploited or the empowered side of the stage.