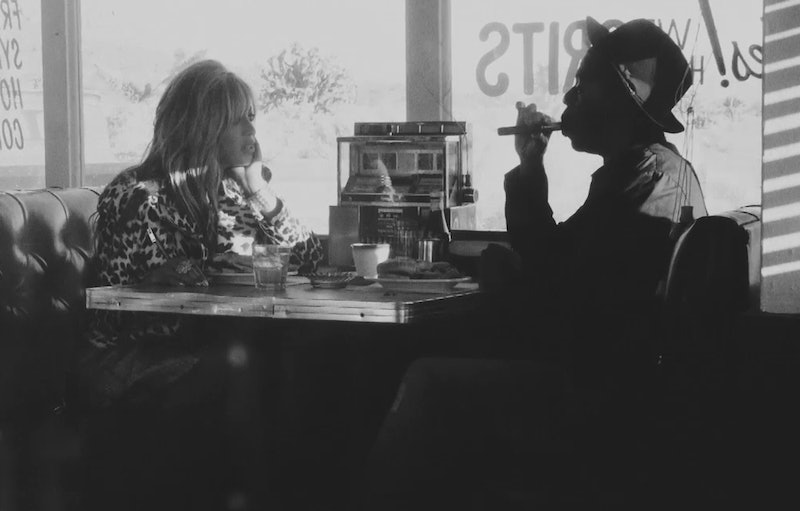 The On the Run Tour may have finally concluded in Paris on Sunday, but we should have known better than to think Jay Z and Beyoncé were going to slow down any time soon. I mean, this is the couple whose response to all those silly divorce rumors was a Beyoncé concert preluded by the 2014 MTV VMAs and a touching tribute to one another at their final Parisian concert. Now, those of us who have been silently sobbing that neither of Beyoncé and Jay Z's short films were being turned into a movie can be appeased just a little bit. Apparently, Beyoncé and Jay Z are releasing a three-part "Bang Bang" short film and it is everything.

Now that On the Run is over, Beyoncé and Jay Z just decided that the best thing to do with their time now is share the movie trilogy they created as part of their concept for the tour with the world. Directed by Dikayl Rimmasch and aired one by one by the website Nowness, the first part of the "Bang Bang" film starts with the sequence of Beyoncé as an old-time club singer and Jay Z as her cigar smoking audience that we remember from the trailer for the On the Run HBO special. It then expands into Bonnie and Clyde-level shenanigans, with twisting car stunts and Jay Z putting out his cigar in some poor man's burger while he's reading a paper with their wanted posters on the front.

Gratuitous harm to burgers aside, Beyoncé and Jay Z are winning again. It's impossible to watch this first part and not start clamoring for the second and third parts. According to the interview Nowness did with Rimmasch, the entire concept for On the Run as told to him by Jay Z was, "We’re not trying to do this literally, it’s not that we’re Bonnie and Clyde. We’re on the run from everything. On the run from becoming a cliché. On the run from doing the same thing again."

If that's what they were going for here, then they definitely succeeded. Watch the film below.

More like this
Taylor Swift, Kerry Washington & More Speak Out On Uvalde Mass Shooting
By Jake Viswanath
Watch The Dramatic First Trailer For Netflix's Jennifer Lopez Documentary
By Alyssa Lapid
Lisa Marie Presley Reviewed Baz Luhrmann’s ‘Elvis’ Movie On Twitter
By Grace Wehniainen
Kanye West Rapped About Feeling That His Kids Are “Borrowed” From Kim Kardashian
By Brad Witter
Get Even More From Bustle — Sign Up For The Newsletter