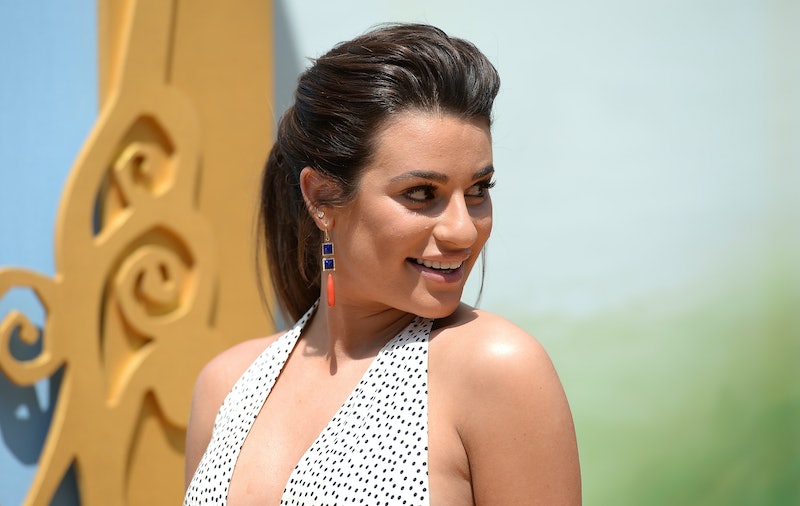 Maybe it's because the end is near for Glee, but Lea Michele joined Sons of Anarchy Season 7 , where she will join other notable guest stars such as Courtney Love and Marilyn Manson. But when will Glee's brightest gold star, Michele, appear on Sons of Anarchy ? We won't have to wait all that long: It's been announced that Michele would appear in the sixth episode of SOA's final season, which has since been revealed to be titled "Smoke 'Em If You Got 'Em." Mark your calendar: October 14 is Lea Michele Gets Gritty Day.

And if you think about it, the episode title is apt, since all of the leaked pictures from set feature Michele smoking cigarettes with star Katy Sagal. The Hollywood Reporter piece also gave us some insight into her role, which is that of a single mother truck stop waitress who bonds with Sagal's character during a rough patch. It's a bit of a left field casting choice both for the show, and for Michele herself— the character is certainly a long way from a group of musical kids at William McKinley High— but young stars wanting to break out of their squeaky clean molds and try something new is a pretty old Hollywood story. With Glee ending soon, it's a no brainer that Michele may want to try her hand at other roles lest she become typecast.

And Rachel Berry this role is not:

But there is more of an obvious Glee connection than you might be aware of. In a red carpet interview at the show's Season 7 premiere, Michele also divulged a little secret: she was addicted to watching Sons of Anarchy in her trailer on the Glee set. She apparently loved the show and called guest starring "an honor." She also reveals she'd love to return to Anarchy would the schedule work out. Further, Sons executive producer, director, and Emmy nominee Paris Barclay said in an interview with Vulture, that he's known Michele for a while, and that she hasn't been on any other show but Glee, and he's seen her grow to identify with her role on that show.

What's more is that SOA creator and showrunner Kurt Sutter wrote the waitress part with Michele in mind and asked Barclay if he could use his Glee hookup to get Michele to come read for the role. Michele loved the script and agreed jumped at the chance. In that same interview, Barclay also added:

She only had to work one day, but she had to do six scenes, and she was awesome. The crew loved her. We finished early. She’s so prepared, and it’s such a different character from Rachel ... She didn’t get to sing. She’s not going to do a note at all.

If Michele was able to woo so many people behind the scenes, I can't wait to see what audience reactions will be like for the season's most talked about guest star — which is saying a lot since there is a bunch to talk about this season.

More like this
Penn Badgley & Leighton Meester Met On A Horror Movie Set Before 'Gossip Girl'
By Jake Viswanath
50 Years After Creating Her Alter Ego, Angelyne Is Still Driving That Pink Convertible
By Gretchen Smail
Yes, Billboard Queen Angelyne Really Ran For Governor Of California
By Brad Witter
Oops! The 'Stranger Things' Monopoly Game Has Spoilers For Season 4
By Alyssa Lapid
Get Even More From Bustle — Sign Up For The Newsletter