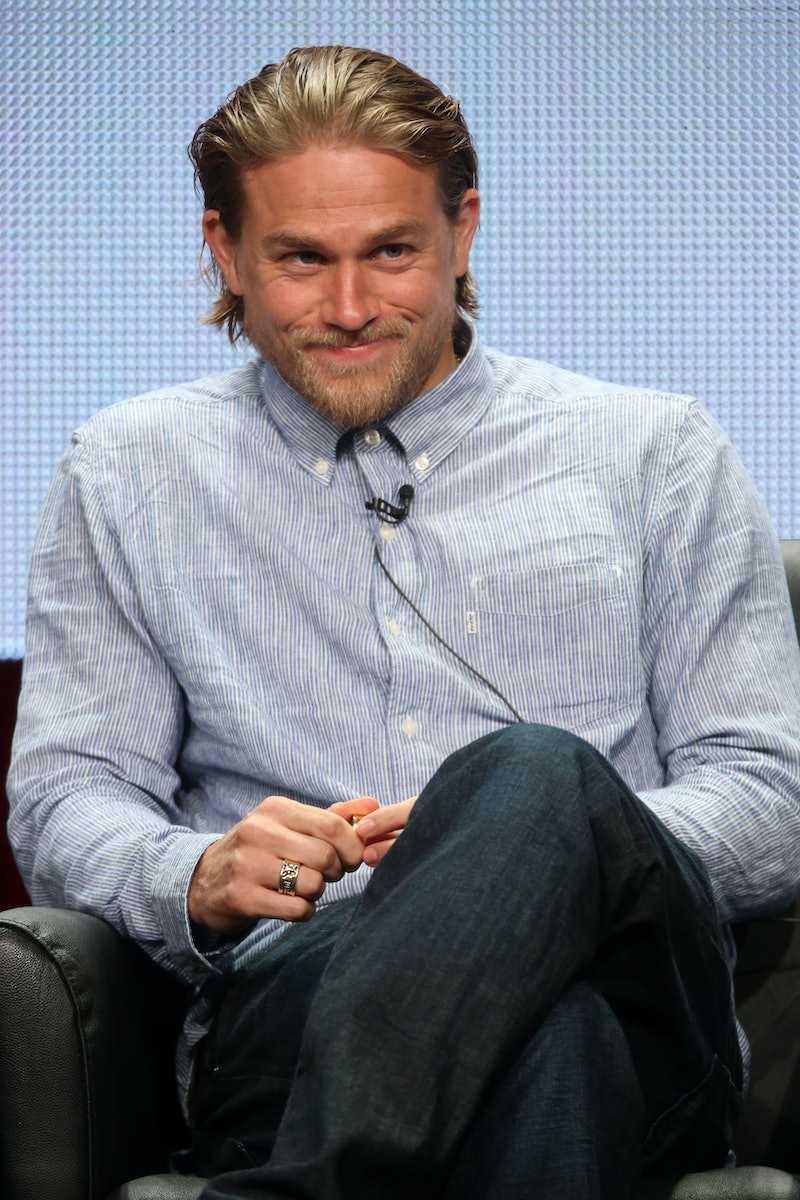 The final season of SOA is upon us and Jax Teller has returned to us. And of course, die-hard fans know Sons of Anarchy star Charlie Hunnam (or Charlie "Hunnomnomnom" as I sometimes like to call him) has been in the news lately for reasons other than his Sons of Anarchy-bound plans for Gemma and Juice. Hunnam admitted to having an emotional breakdown over Fifty Shades of Grey after scheduling problem caused his exit from the movie. That is not very Jax because, spoiler, Charlie Hunnam is his own guy — despite the constant conflation between Sons of Anarchy's Jax and Hunnam's real life persona.

As it turns out, Hunnam is pretty surprising, too. It wasn't until last year when Pacific Rim came out that I even realized the British guy from Undeclared and the blonde beard on Sons of Anarchy were the same dude. I'm still not sure what his real accent is. I don't think he knows either. In celebration of that ambiguous speaking voice, let's take a moment to celebrate those differences and the organic farming, donkey-owning, dare I say it, sorta-hipster that is actor and writer Charlie Hunnam. (And yeah, his girlfriend is making jewelry now .) He may be a hooligan, but he's a different flavor of hooligan from his most popular onscreen character. He may be just as rugged as Jax Teller, but not in the way you would expect...

Of course, we can get to all the ways Hunnam isn't Jax Teller after one gratuitous shirtless GIF:

And now for all the ways this actor is not his beloved, tormented character:

He hits up flea markets to arm his house

Clearly, that's not very Jax. (Though you know, this actually sounds like the way I would defend my house. I think I'd grab the stable gun or a couple of darts in a panic move. More Home Alone than Gran Torino.) Maybe that's why Charlie Hunnam and his girlfriend moved out of Hollywood. They had to away from these Bling Ring wannabes who were unimpressed with Hunnam's intimidation techniques.

He sold a screenplay to Brad Pitt

Yup, this is a thing that happened. Hunnam wrote and sold a screenplay to Summit Entertainment and Brad Pitt's production company "Plan B" about historical figure Vlad the Impaler. Vlad is the origin of the Dracula character, and Hunnam explained to Entertainment Weekly back in 2009 how his script would tell Vlad's story without going all Edward Cullen.

As the script stands now, we don’t touch on vampirism. That was my one non-negotiable area when we were developing it, and thankfully, nobody suggested that we should delve into it at the end. But you can clearly see the things that Bram Stoker took... Vlad was fighting with bows and arrows and swords and the Ottoman Empire had guns. He had the advantage of fighting on home ground and he knew the terrain better, which gave him the ability to fight at night. Because he would fight at night, he would try to get his men on a night schedule, so they hadn’t already been up for 12 hours through the day. There are a million ways to show that this guy is the origin of vampirism without actually having him drinking blood.

He danced with Seth Rogen

Look at them! So young. This is from the afore-mentioned Judd Apatow comedy series Undeclared — Apatow's follow-up to Freaks and Geeks about college freshman. It's an excellent Netflix binge if you're looking for something with light commitment. Also, because of this show, you can say that Jax Teller and Leslie Knope have made out! Amy Poehler played an RA who was crushin' on Hunnam's character, Lloyd. Treat yo'self?

He was expelled from High School in England

OK, so maybe this is something you would expect from a brooding biker bent on revenge. However, the setting could not be more different. Not only is Charlie Hunnam a Secret Brit like Andrew Lincoln, Damien Lewis, and Michael Sheen, he comes from a small town in the North of England. He's from lake country like... north of Yorkshire, meaning north of Wuthering Heights and The Secret Garden and Downton Abbey. Not much like Charming, I reckon.