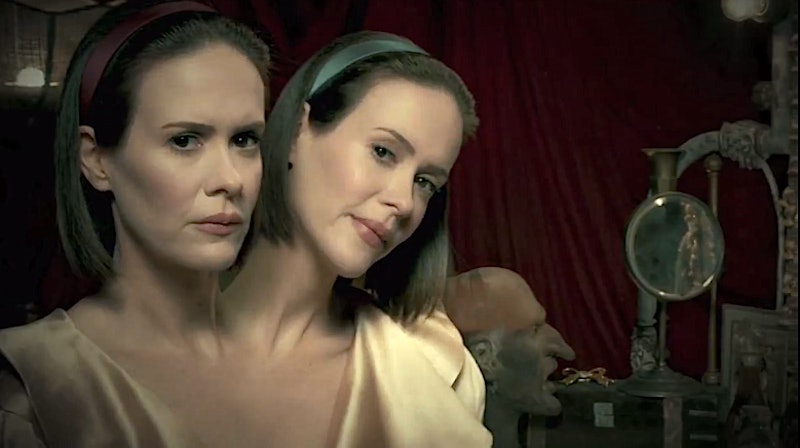 Nightmares commencing in 3… 2… 1. That’s exactly what my nights have consisted of ever since Ryan Murphy decided to start unleashing a series of American Horror Story: Freak Show teaser trailers, each one more twisted and terrifying than the last. Seriously, it’s as if Murphy has somehow dug into my subconscious and is slowly bringing all of my worst fears to life. (I’m totally sending him my therapy bill, BTW.) The claws and tongues and contorting I could at least somewhat handle, but this latest batch of teasers have now brought killer clowns into the AHS equation. NOPE. *curls up into fetal position*

But because I love this show (and TV in general) to a borderline unhealthy degree, I've decided to swallow my sword… uh, I mean my fear, and completely submerge myself in as much AHS Season 4 knowledge as possible. So what exactly can we deduce from these super creepy clips other than the fact that they’re… well… super creepy? Well, as it turns out… not much. Even the AHS: Freak Show extended trailer (which at least gives fans an actual glimpse of the actors in action) still left us with way more questions than answers. But that’s all part of this AHS's style. I mean, we barely know what to expect when we’re actually watching the show, let alone before it airs. But one thing’s for damn sure… none of us are going to be getting any sleep this season.

However, that’s a psychotic break for another day. In the meantime, I’ve got a few questions (some more serious than others). So without further adieu, here’s a rundown of everything these horrifying trailers didn’t tell us.

Let's start at the beginning, shall we? This little beauty showcased a ticket being held in a chicken-like claw, however, we don't know much else about what's going on here. For example, does this creature work for the show or is he a scalper trying to make an extra buck off his ticket? How much did one pay for Freak Show tickets back then? Did they have some sort of Groupon equivalent for those with a tight budget? I WANT TO KNOW!

Other than the fact that this guy gives us the slithers, we really don't know anything else about him. Usually the people shown in AHS teasers are never seen in the actual show, but this guy looks as though he could totally be one of Jessica Lange's employees. The proof is right on the tip of his tongue (literally). Is he actually part of the show? Was he born with that tongue abnormality or was this an actual choice he made? Does he find it hard to eat spaghetti? But most importantly, what flavor is that lollipop? I want answers, people!

This performer may fly through the air with the greatest of ease, but I'm pretty sure the same can't be said about shopping expeditions. Seriously, where does one go to find three-legged outfits? Will this person also be part of the actual show? Can we expect trapeze performances to be incorporated throughout the season? I demand details!

Here we have yet another person with three legs. Are these two performers related or at least connected in some way? Can that please be part of the story? Is the black face paint supposed to signify something or is it just part of the act? Do you think this woman practices yoga? Hell, she may have even invented it. I need more info, Murphy!

This woman is inside an actual bird cage. HOW does that happen? The teaser doesn't specify, but I'm guessing this wasn't done by choice due to the mystery man hovering over her in a terrifying-obducter sort of way. Even his hands don't look friendly. So who is this guy? Is this all part of some act or is she being imprisoned against her will? Is this a nod to Denis O'Hare's character, who could potentially be trying to steal Lange's performers away from her? Also… what happened to the bird that used to reside in that cage? Do I really even want to know?

Clearly, this show is going to try its hardest to make our stomachs turn (FYI, mission accomplished), and this little performance is no exception. But what's this guy's story? This isn't so much an abnormality as it is an odd career choice. What happened to this guy to make him decide to turn this into a job? How does one go about practicing this stunt? Will that sword later become a murder weapon in the series? If so, it'll be bad news for this guy. His DNA is all over that thing.

Up until now it's been unclear what exactly Murphy meant when he said there would be a Clown Killer on the show. Does this refer to a killer of clowns or an actual clown that murders people? This teaser seems to suggest the latter — though to be fair the clown isn't actually doing anything reprehensible other than just being downright terrifying. And that smile at the end… *shivers* But once again, we really don't know anything about this clown — for starters, what it is he's actually smiling about? Maybe someone just took his photo. Perhaps he was in a rousing game of hide-n-seek. Or he's just a big fan of Pharrell's "Happy" song. And if he is dangerous, does he only go after kids or is any age group up for grabs? Asking for a friend…

The Scariest Clown You Will Ever Meet

Murphy definitely isn't clowning around this season because these clowns are creepy as hell. Will both of these guys be appearing throughout the season? If so, I'm going to need to start preparing myself like yesterday. What is going on off-screen that makes this clown pull such a 180 on the personality chart? One second he's smiling and the next… well, you saw what happened. Maybe he witnessed someone committing a murder (what a twist that would be, right?), or caught someone eating his Chipotle burrito. That'd be enough to make anyone feel murderous.

I saved the best for last. While this footage definitely reaffirms many of the main characters' roles (Kathy Bates as the bearded lady, Angela Bassett as the three-breasted woman, etc.), there are still plenty of things I'm curious about. For instance, how often do you think Bates' character has to trim her beard? How much do you think the Strong Man was benching? Who was that lucky girl with Evan Peters? (We can't see her face, but could it be Emma Roberts?) Speaking of which, why were Roberts, O'Hare, Frances Conroy, and Gabourey Sidibe completely MIA from this clip? It's not a true AHS party until the whole gang is present.

See you all Under the Big Top on Oct. 8!

More like this
The ‘Squid Game’ Season 2 Renewal Teases A Creepy New Figure & A Return
By Brian Anthony Hernandez and Bustle Editors
Russell T Davies & Helena Bonham Carter Are Teaming Up In A New TV Show
By Sam Ramsden and Frances Stewart
Everything To Know About 'Persuasion,' Netflix’s New Jane Austen Film
By Nola Ojomu and Radhika Menon
Here’s Everything To Know About ITV’s Latest Rom-Com 'You & Me'
By Catharina Cheung
Get Even More From Bustle — Sign Up For The Newsletter