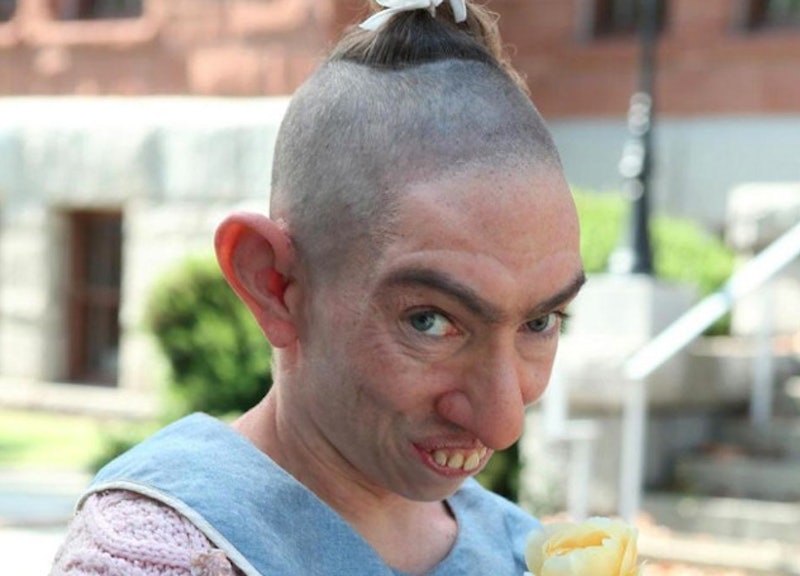 To say that one is looking forward to American Horror Story: Freak Show 's premiere is a bit of a double-edged sword. On the one hand, of course we're excited to see what new realm of horrors Ryan Murphy has concocted. But, on the other hand, if the AHS teaser trailers are any indication, we are probably going to get zero sleep this season, which I've heard is kind of a crucial element of, you know, being human. However, no matter what mixed feelings you have about Season 4's therapy-inducing story arcs, there is one piece of information that will most certainly bring a smile to your face: Pepper will definitely be making an appearance!

As many of you know, there was a great deal of speculation a few weeks back regarding the possibility that Pepper would return as a Season 4 cast member after a leaked (but unconfirmed) call sheet made its way onto the Internet. But now Entertainment Weekly has officially confirmed its accuracy. Pepper (played by actress Naomi Grossman) was first introduced during Asylum, where she played one of Briarcliff's many patients. Later into the season, we learn that Pepper was not, in fact, guilty of the crime that got her institutionalized, yet she was still found guilty due to her microcephalic condition. "That’s how it works for us freaks, we get blamed for everything," she informed Dr. Arden. And now it seems we'll get the rare opportunity to get a deeper look into that backstory, which apparently consists of being one of Elsa Mars' (Jessica Lange) entertainers.

"She is in this [season]," Murphy confirms to the site. "What Elsa has done for 20 years is she goes around to hospitals and jails and rescues these 'freak' circus performers who are going to be shipped away to asylums and she signs the waivers and she becomes their guardians." Which means the events of 1952 Jupiter, Fl. will take place roughly 12 years prior to the events at Briarcliff, making Freak Show "sort of like what happened to Pepper before she went to the asylum."

So why is this so exciting? Well, not only does this offer viewers the chance to welcome back a beloved fan favorite, but it also brings hope that a crossover like this could become a common occurrence. This marks the very first time AHS has ever resurrected a character from a previous season, but now that they have, there's nothing to stop them from doing so again in future seasons. So when/if that glorious day comes, here are a few former characters we hope Murphy keeps in mind…

Not only did this character have the best lines of the season, she also had the greatest wardrobe. And by greatest, I do mean most outlandish. But that simply made us love her all the more. She and that mellon baller of hers would be a welcome addition to any season.

Emma Roberts was born to play this role, so it was a shame she had so little time to really revel in it. Madison's ballsy, devil-may-care personality was a definite highlight of this wicked season and I know I wouldn't be the only one thrilled at the prospect of an encore performance.

We were given a taste of Shelley's tragic backstory — which involved her husband locking her up in a nut house just for really liking sex — but there's clearly much more to this story. I, for one, would love to see her character come back into play somehow and inform us about her many antics before ending up at the asylum.

James Cromwell's portrayal of this evilly corrupt doctor was equal parts terrifying and brilliant. (I know I'll never look at Babe the same way again.) But like many of these others, I wasn't quite ready to say goodbye to his character. What exactly made him into the science-fueled monster that he became? Was he always like that or did something happen to make him that way? This would be Murphy's chance to give us some answers and possibly make us look at Asylum in a completely different way.

Boy did this lady have spunk. And given how she was basically one of the only remaining survivors that season, she is definitely not one to be trifled with. Having this character pop up again, either before or after the events of Murder House, would be a welcome sight indeed. Plus, I'd be lying if I said this wasn't also a tactic to try and delay Jessica Lange's AHS departure. So basically it'd be a win-win.