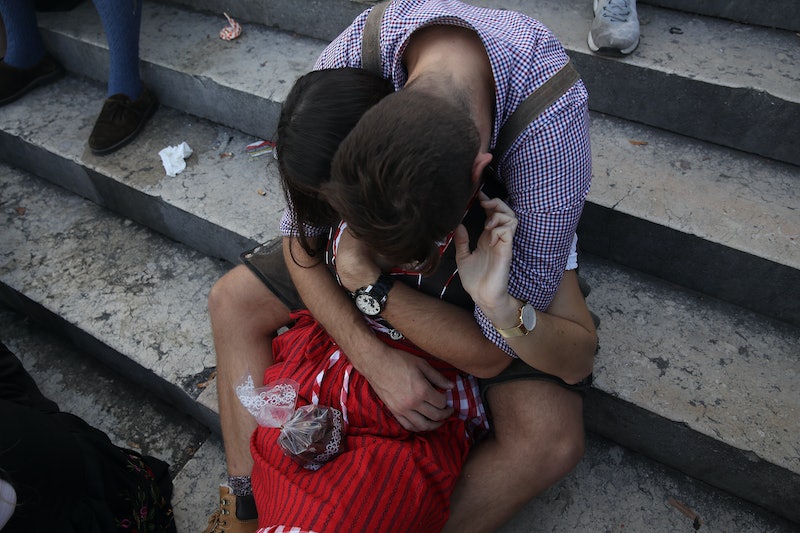 Winter is coming, and so is male birth control. In what may be the best thing to happen to safe sex since, well, safe sex, the Parsemus Foundation has announced that a new form of male birth control called Vasalgel will be on the market in three years. Following successful baboon trials earlier this month, researchers seem confident about Vasalgel's prospects in the near future, and the news has spread faster than you can say "orgasm." But despite the enormous attention Vasalgel has received, a number of questions remain around the product — how does it work? Is it safe? Does it hurt? Is it reversible?

Considering the entirely novel nature of Vasalgel, it comes as no surprise that both men and women are curious about the ins and outs of the product and the procedure. After all, it isn't every day that a revolutionary form of contraception is introduced, and it is even rarer that it is targeted at men. So before you pop that bottle of champagne and celebrate the new landscape of safe sex, allow me to answer some of the more pressing questions you may have about the one, the only, Vasalgel.

The most basic and the most important question of all! Vasalgel is a "polymer hydrogel," which for our intents and purposes, means a gel, that acts as a new form of birth control specifically for men.

How does a gel work as birth control?

Part of Vasalgel's novelty stems from the way in which it works. Unlike the pill, which is ingested, or the condom, which is used externally, Vasalgel is actually an injection. Vasalgel is administered by way of a quick shot to the vas deferens, the tubes that transport sperm, where it forms a nearly solid plug. This prevents sperm from passing through the vas deferens, making the fertilization of a woman's eggs nearly impossible.

The procedure has been likened to a no-scalpel vasectomy, in which a local anesthetic is applied to a man's nether regions before a single puncture is made in the scrotum. A no-scrotum vasectomy, like Vasalgel, interferes with the sperm's trajectory, and prevents it from exiting the body and entering a sexual partner. Generally, a no-scalpel vasectomy takes 10 to 20 minutes, and a similar timeframe is expected of Vasalgel.

The difference between the two procedures, of course, is that while a vasectomy cuts the vas deferens, Vasalgel simply fills a small part of it with the gel plug.

If it's an injection, does it hurt?

Seeing as human trials have yet to begin, there is no real way to tell whether or not the procedure will be painful. However, considering its similarities to a no-scalpel procedure, which is often considered considerably less traumatic than a traditional vasectomy, it seems that Vasalgel is not expected to require a high pain threshold. It is likely that the injection itself will require a local anesthetic, much like a no-scalpel vasectomy, but otherwise, it seems that the procedure will be relatively pain-free.

What if I change my mind about wanting kids?

The real beauty of Vasalgel lies in its reversibility. Whereas vasectomies are difficult and painful to reverse, Vasalgel is a breeze. Should a man decide to undo the procedure, all he needs is another quick injection, one that flushes out the plug created initially. It doesn't matter if he changes his mind in six months or six years — the procedure remains easily undone, and in lab tests on rabbits, has restored full fertility. Currently, further tests are being conducted with baboons to confirm earlier research findings, and if all goes as expected, Vasalgel may be the answer to all our prayers.

How much will it cost?

Ah yes, the critical query. According to the Parsemus Foundation's FAQ page, "It is likely that the cost for the doctor visit will be more than for the product." No exact numbers have been set, but the Foundation noted that Vasalgel is not to cost more than a flat screen TV, and certainly not more than $800. In other words, if you can afford an iPhone 6, you can definitely afford this new male birth control.

More like this
Michigan’s Governor Is “Going To Fight Like Hell” To Protect Abortion Access
By Andrea Zelinski
23 Abortion Funds In States With Trigger Bans To Donate To
By Emma Carey
What Dreams About Being Lost Mean, According To Experts
By Carolyn Steber
If You Live With Migraines, You Need To Know About Cove
By Danielle Kraese
Get Even More From Bustle — Sign Up For The Newsletter